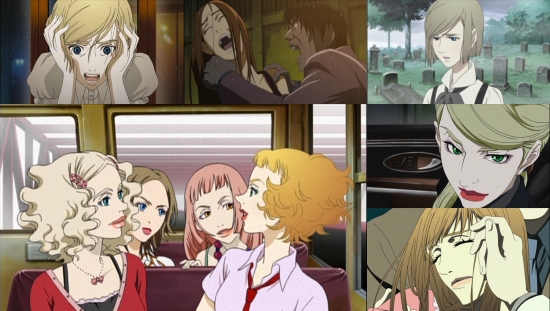 Have you ever woken up one morning feeling sick, dizzy and with no memory of the night before? You most probably have - it's called a hangover. However, the girls at the centre of Red Garden awaken one New York morning with a hangover a decidedly different kind, the reasons for which soon become clear in this ADV Films license rescue from MVM Entertainment.

Let's not beat around the bush here - the disparate group of high school students in question are dead. With one exception however, these girls have been reanimated and are lucky enough to be walking around and capable of living their lives as normal (albeit with a thirst that is only quenched by eating lemons). Of course, such a convenient fact doesn't come without a penalty, and in this case the debt the girls owe is a great one - a debt which involves the need to fight against strangely human monsters on a nightly basis, lest they perish permanently. There's little known about the organisation named Animus at the centre of this strange sequence of events, but whatever is going on it clearly isn't particularly savoury.

Then again, it seems that the girls afflicted by this nightmarish set of events are far from thrilled about what has befallen them for other reasons - namely the effect of fighting monsters night after night upon their love and social lives, and the fact that this group of characters with wildly varying personalities have to actually (shock, horror) talk to one another! Although friendships are eventually built and sustained within the group, it's hard to escape the fact that the main cast are for the most part entirely vacuous and self-centred, and it's hard to feel much pity for their plight when they spend so much time bitching about it or everyone and everything else - you'd think being undead would rank as a higher priority than fretting about breaking a nail in a fight with a superhuman monster.

It's the nature of the main cast which makes Red Garden so difficult to watch - when you find yourself almost universally loathing them all and are frustrated or irritated by their every action, who are you supposed to root for within the series? This could potentially have been alleviated had we seen these girls learn lessons and become better people as a result of their terrible experiences, but it really doesn't happen - at best, the group just form bonds so that they can bitch about other people together. The way all of this occurs seems to be a deliberate decision on the part of the show's writers, but that doesn't make it any more detrimental to the viewer's immersion in the show as it gets shoved out of the way by an overwhelming desire to hurl things at your television.

Even aside from this rather major issue, it's hard to find much to enjoy here - the series never seems entirely sure what it wants to be, with lashings of human soap opera that (and I'm not kidding here) very occasionally break into a musical-style song for absolutely no reason other than to cause inadvertent hilarity and make things seem even more daft than they already are. The trouble is, none of this drama is compelling, while the horror and mystery elements within the series are largely drowned out by the focus on romantic entanglements and the like to pretty much ruin any opportunity to deliver anything particularly interesting in this sphere.

As well as the main series itself, it's probably also worth mentioning the curiosity that is the 45-minute OVA tagged onto the end of the series, which I mention only because it's so incredibly bizarre. Following the same main cast into a far, far-flung future complete with giant robots and the like, it's a surreal twist to the story of the series proper which is actually a little more compelling thanks to its setting, even succeeding in making its characters a little (but just a little, mind you) more likeable. Even this relatively stand-alone OVA feels like a narrative mess, but at least it's a mess with a semblance of imagination.

Alongside its rather unique story and notably non-Japanese setting, GONZO have also tried to strike out and dare to be different in terms of the show's visuals, with an eye towards more realistic character designs and an attempt to give the series a Hollywood-esque sheen complete with adding a film grain effect to the entire series. A nice idea it might be, but the result on this DVD release is disastrous - the series looks pretty iffy at best in terms of animation quality, but with the addition of film grain that looks more like Vaseline and sand have been tipped over the screen this is quite possibly the worst-looking UK anime DVD release I've ever laid eyes on. It's truly, truly horrible to watch, particularly on a large HDTV, so have some paracetomol ready for the ensuing headaches if you're planning to watch episodes in bulk.

Ignoring the painful and jarring musical elements we previously mentioned, both Japanese and English casts do a decent job here - the English dub in particular arguably fits better with Red Garden's New York setting, but both languages offer no shortage of requisite ear-piercing screaming and shrieking when it comes to fending off monsters.

If you haven't guessed from the tone of this review, we really don't have anything particularly nice to say about Red Garden - it looks terrible, its story is a thrown-together mess of conflicting or poorly executed ideas, and its characters... well, the less said about them the better. This series might dare to be different from what you might typically expect from a supernaturally-tinged anime, but "different" doesn't always correlate to being "good", and we can most assuredly say that Red Garden is not good.

3
Some brave and original ideas don't make up for the fact that this is a horrible-looking series with equally horrible characters, wrapped up in a clumsily portrayed story.
COMMENT AND DISCUSS
blog comments powered by Disqus