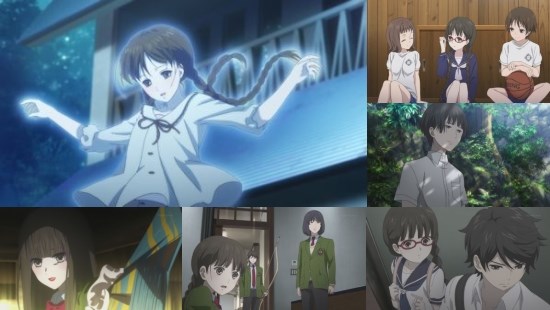 Having risen to the top of the food chain, it's taken mankind an alarmingly long time to realise that forcing other species into extinction one way or another probably isn't the best way to keep the planet's ecosystem healthy - hence the creation of the so-called Red Data Book, to keep track of species (be they animal or plant) on the brink of extinct to ensure their conservation.

It's this concept which drives the premise and title of Red Data Girl - a series which at its heart depicts a seemingly normal teenage girl who is as shy as you might expect of someone raised in a rural area while living at a shrine. There is more to Izumiko Suzuhara, the girl in question, than meets the eye however - more than even her aversion to using electronics.

In short, Izumiko is the vessel for a being known as the Himegami, a spiritual god (or goddess in this case) who is one of a kind and of interest to numerous factions, not all of them entirely well-intentioned. Thus, Izumiko is assigned a protector in the form of Miyuki Sagara, before eventually finding herself enrolled in a Tokyo academy which has no shortage of supernatural elements within its walls.

So the scene is set for a series with a lot of interesting premises, starting from the relationship between the painfully shy Izumiko and her gruff, straightforward protector Miyuki through to the supernatural side of the series as it builds up its world of spirits and the like. Given all of this potential then, it's incredibly frustrating to see all of this frittered away - put simply, Red Data Girl is a convoluted mess.

The show's biggest problem is often that it tries to do too much - nice ideas introduced early in the series are never explored again, while new concepts or additions to the show's narrative are piled up at such an alarming rate that none of them can be adequately explored. This leaves some characters flitting in and out of the limelight while others are given a more constant yet uneven treatment, all of which combines to leave you feeling lost within the fog of a story that seems to have no real ultimate target or goal.

Without any clear focus, Red Data Girl becomes increasingly dull the longer it goes on - it tries manfully to hold the viewer's interest, mostly by loading episodes up with tantalising cliff-hangers, but after being lulled into a sense of anticipation by these a few times only to be let down the following week, you quickly become wise to this gimmick and pay it little heed.

If there is one thing to be said for the series, it's that the show looks great visually, with animation studio P.A. Works providing their usual attention to detail and loving care upon the show's aesthetic - it might not be quite up there with some of their previous works, and again there's nothing here to really catch the eye in a striking way, but taken as a whole it's satisfying to look at.

Perhaps the biggest frustration with Red Data Girl to this point is not so much that the series is dull, but the fact that it has so much potential but fritters it away in a whirlwind of bad planning and pacing - there is clearly some well-thought out ideas and fascinating relationships contained within the series, but presented in this fashion these possibilities are left shattered and discarded in the midst of a disjointed narrative. Unless it manages a spectacular turnaround in its second half, Red Data Girl is best avoided as a brave but abject failure.

Japanese with English subtitles - available in 480P and 720P resolutions.

4
This series has no shortage of good ideas, it just has absolutely no idea about how to express them in a satisfying fashion.
LATEST REVIEWS
Girls' Last Tour