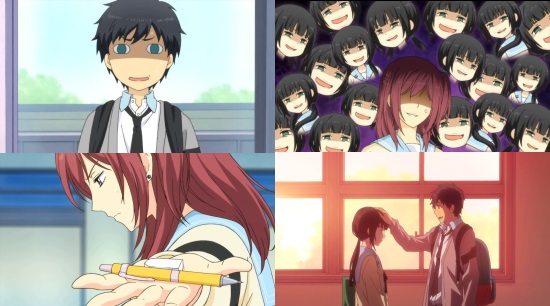 Ever wished you could have the chance to go back and be at school again? No more need to work, just chill out with friends and learn stuff? Certainly it’s a moment that comes to all of us at some point I suspect, and between the recent Erased and this season's ReLIFE it would appear that there are more than a few people in Japan having the same thoughts. However, whereas Erased used its time-travelling, body-swapping shenanigans to solve mysteries ReLIFE has a more light-hearted touch and you know what, its turned out to be something really special. Plus, thanks to the series unusual release strategy (the series was streamed fully in the week before the TV broadcast and Crunchyroll have been allowed to upload all 13 episodes at once) you can gorge on the lot!

Arata Kaizaki has all but hit rock bottom. He’s a 27 year old smoking NEET living off his parents good graces, unable to find a new job because his prospective employers invariably find out that he quit his last job after a mere three months. Fortunately, opportunity comes knocking after he spends a drunken night with some old friends with whom he pretends to be a working salary man as he meets Ryo, a seemingly shifty highschooler who suggests that if Arata signs onto his company's new experimental program he’ll be rewarded with free living expenses for a year and a job at the end of the program. Arata, or rather all the alcohol he’s been drinking, happily signs on and quickly pops down the little pill he’s been offered, only to awaken the following morning having regressed back to a 17 year old version of himself! Ryo informs him that this is all part of a test to see if sending NEETs back to school will rehabilitate them into valuable members of society, and Arata will have to attend a local school for a year. This brings him into contact with all the drama of school life with masses of exams to be failed, friends to be made (and set up with one another) and even a few juicy secrets too! From day one through to the beautiful firework-filled climax, its certain that Arata is going to have a powerful experience.

Well, there are certainly worse excuses for a school comedy show, though this may be one of the most convoluted plots (all crammed into the opening episode too) that such a show has had for a long time. However, don’t despair because ReLIFE is actually a really solid show, backing up some really great comedy with strong, likable characters and pretty solid (if predictable) drama.

For starters the comedy aspects of the show have all the best age gags to pick from because Arata is now both too old and too young at the same time - whether its Arata finding out that just because he looks 17 doesn’t mean his body is, so he can’t exactly keep up with his super-energetic new classmates, or the fact that although he can still legally smoke and drink he looks too young to be able to buy any cigarettes or booze anymore. This combines with some truly wonderful character moments (both of the comedic and dramatic variety) like brainiac Chizuru who can’t remember people’s names and has to practice smiling in a way which terrifies people, or Kazuya who is smart but utterly clueless about the girl who likes him. It all just snaps together wonderfully and it’s helped along by the fact that all of these characters are truly fun, likable and imperfect. Chizuru is a brilliantly adorable take on the quiet but socially inept genius trope and An is the perfect ditzy friend who’ll encourage you to do anything to have a good time. Even Arata just works wonderfully as the embodiment of the person we all probably would be if we were in his shoes – cocky and prone to putting our foot in our mouths!

In fact the only thing that seems somewhat disappointing is the fact that the romance aspects are a little muddled and underplayed, as Arata’s told quickly that the company "encourages true love but won’t stand for anything illegal" (a somewhat veiled reference to Japan's rather labyrinthine age of consent laws) at one point only to be told later that he should take the opportunity to "experience every part of a fun high school life" (nudge nudge wink wink). Largely, however, the pacing of the show (which is spot on throughout) indicates that this is largely due to the series following the still running manga series, and the romantic elements that get introduced later on are obviously set to continue developing beyond the story shown here.

The series is brought to life by some solid and delicate direction by Tomochi Kosaka, who's proving to be pretty confident in his first time in the director’s chair, helped by a really great animation job by TMS Entertainment (who are also putting out three other series this season). The character designs may not be the most original around but they’re certainly charming and look great when animated, with some really nice scene composition to boot which just makes the show a joy to watch. Theres also some neat little bits of design round the edges too – in particular the ‘stickers’ that Chizuru sends through her phone are super cute and I kinda hope they make some physically as they’d be really neat to own!

This is a really great show to sit back and just enjoy watching this season and you won’t regret a moment of it. ReLIFE has succeeded in bringing some new life into this kind of show and has everything you could want from it. The only issue is that now its going to take some real strength of will not to just jump onto the original manga (also available on Crunchyroll) and just devour the entire series in one go to see what happens next!

You can currently watch all of ReLIFE in streaming form on Crunchyroll.

8
Pumps some much needed (re)life into the genre!
COMMENT AND DISCUSS
blog comments powered by Disqus