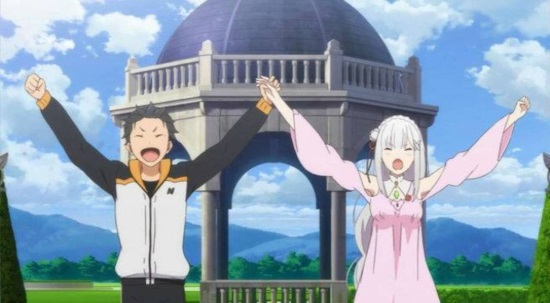 So, to start with a confession: I never watched Re:Zero the first time around. Oh, I saw a couple of episodes to prepare for our award podcast at the time and I was mildly aware that the series was generating a bit of buzz (or a lot of hate if you listened to Elliot at the time) and there was some kind of argument about if you were on team phlegm or team spam or something but that was the extent of my knowledge. Now that Anime Limited have released the series I figured it was finally time to find out whats been getting everyone so excited.

Subaru Natsuki is your common garden-variety hikikomori who, as you might possibly have guessed from the series title, finds himself suddenly dropped into a fantasy world with nothing more than a tracksuit, some convenience store snacks and his phone. Whilst most might be bewildered by this fact, Subaru is thrilled, believing that all his dreams have come true and he’s been gifted special powers and summoned to save the world. Unfortunately for him he has no money or knowledge of the world he finds himself in, he’s weak, and his only special power turns out to be that whenever he’s killed he’s bounced back in time to a set point beforehand (which he can’t control).

Fortunately for him (or possibly not as the case may be), he’s rescued from his first (of many) attempted muggings by the half-elf Emilia who’s searching for a lost locket which marks her as a candidate for the throne of the kingdom. Subaru determines that he will repay her kindness and helps her search for the amulet in a quest that will lead him to his first of many, many, many deaths.

The aim of Re:Zero seems to be to try and be a post-modern, not-quite fourth-wall-breaking version of the now-rote trapped-in-a-fantasy-world trope. Subaru doesn’t quite do full-on monologuing to the camera ala Deadpool but he comes pretty close as he spouts off every thought that comes into his head comparing every occurrence to the common tropes of light novels and games. The series clearly expects this to be the big recurrent gag of the series in a ‘nudge-nudge, know-what-I-mean’ kind of way but to be honest its so poorly executed that it falls flat on its face every time they try it and it goes a long way to making Subaru a tedious and boring character whom you have no empathy for at all. Whilst this does lessen off in later episodes and he becomes more tolerable the damage has been done at this point and frankly his over-the-top reactions to everything don’t help either.

You can’t help but feel that the series would be so much better if it would just commit to either playing it totally straight or being full-on Deadpool-style meta and really running with it. As it is, it just doesn’t add anything to proceedings – it’s not as if Subaru’s ‘real-world’ insights are ever really capitalised on in any manner other than a cheap gag here and there.

Elsewhere the other characters fare marginally better. Emilia is a pretty standard princess type with magical powers that have a few interesting limitations and her familiar, Puck, is a small talking cat so points for that (Subaru’s only truly relatable feature is that he just wants to stroke Puck and tickle his ears). A pair of twin maids in service to the lord Emilia lives with, Rem and Ram, end up with some fairly meaty character development in their own storyline in the second of the two arcs on display here: in what are probably the strongest episodes presented, they do end up a bit rushed because Subaru doesn’t feature in their backstory and he has to muscle his way into every part of this show in full-on irritating-main-character-mode.

Beatrice, a mysterious girl also living at the mansion does not fare better however, largely due to her dub which is truly bad with neither Kira Buckly or Satomi Arai managing to do anything with the lacklustre script and direction which requires them to speak in an emotionless monotone randomly inserting the words ‘I suppose’ at the end of every paragraph. Neither dub is particularly great here if we’re honest though they don’t quite venture into unwatchable by any stretch of the imagination.

The adaptation of the light novels is handled by White Fox, best known for some brilliant work on Steins;Gate and Girl’s Last Tour. They seem to have left their A-game on the shelf this time however as whilst there's nothing wrong with the visuals here, there's nothing outstanding here either. Everything is just a bit…average.

I went into this series with the intent of watching a show that almost everyone has been singing the praises of and having a good time but ultimately I honestly can’t figure out what the fuss is all about and given that you could pick up shows like Overlord or Log Horizon which cover similar ground so much better or especially Re:Creators which actually does something with the more meta aspects, I’m not entirely sure why you’d choose to watch this one. Possibly I’m underestimating the appeal of identical twin maids…

Blu-ray collector's edition comes with an artbook and series guide.

5
Not as groundbreaking as it seems to think it is.
COMMENT AND DISCUSS
blog comments powered by Disqus