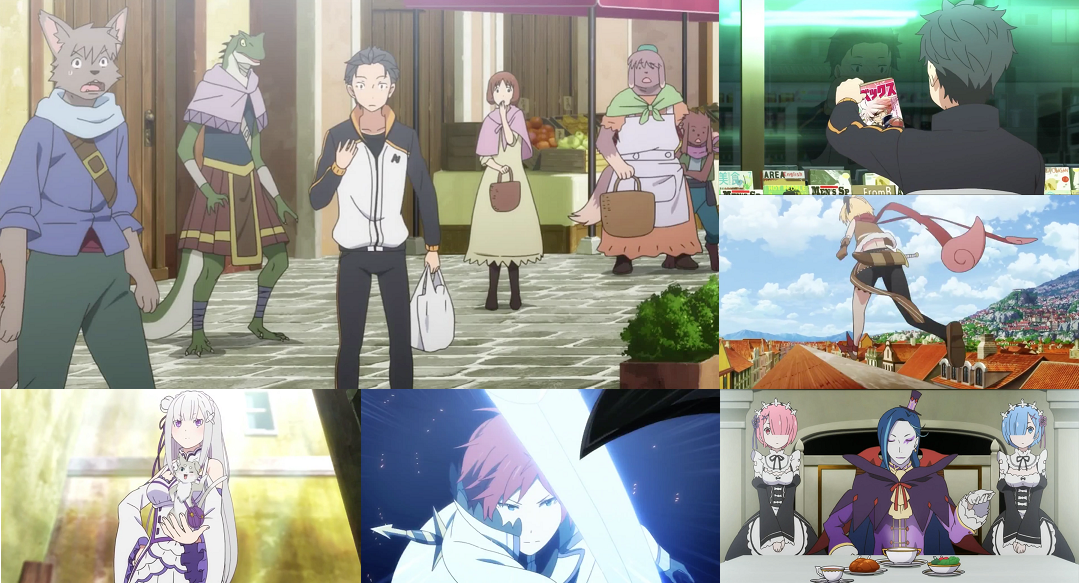 Flipping through a manga for sale at the convenience store, nothing seems out of the ordinary for seventeen-year-old Subaru Natsuki. Except for the horrific images of him bleeding to death interrupting the scene, that is. However, this seems to be a prompt for the viewers only, as Subaru is blissfully unaware of the scenes of his own death. When Subaru leaves the convenience store, it's dark outside. He rubs his tired eyes, murmuring to himself he perhaps shouldn’t be gaming so much, only to find himself in a completely different world when he opens his eyes!

Now suddenly in broad daylight, standing in a city with blatant fantasy and medieval influences, Subaru reacts how most game fanatics would react: pleasantly surprised. Subaru hasn't lost his memory nor is he scared – instead, he uses his immense knowledge of games to navigate through this new environment.

The city is inhabited by humans and demihumans – most of which seem to be anthropomorphic cats and lizards. Subaru becomes his own narrator as he tells himself he is without a doubt the hero of this world. He wonders which beautiful magical girl summoned him here and even tries to use magic, in which he hilariously fails. Not only does Subaru find out he can’t wield magic, he also finds out he can’t read the written language used in the city, although everyone does speak Japanese. When trying to buy an apple from a market merchant, he discovers Japanese money has no value there.

Dressed in a tracksuit and armed with nothing more than a bag of groceries and a cell phone with no signal, Subaru looks like the odd one out in these new surroundings. When venturing in to a dark alley, he nearly gets run over by a small girl on the run from an unknown enemy before three ominous looking individuals try to mug him. Thinking this is his chance to unleash hidden powers he must undoubtedly have gained when he emerged into this world, Subaru tries to fight back – only to find out he doesn’t have any special powers either. Ready to surrender, a beautiful silver-haired girl accompanied by a talking, cat-like spirit named Puck interrupts the fight, saving Subaru. When the girl reveals she is after a thief who stole her insignia, Subaru insists of helping her reclaim it.

The girl introduces herself as Satella, her unique beauty explained by the fact she is half-elf. Satella can wield magic and talk to spirits, with Puck as her own spiritual companion – but only between 9 and 5 as spirits must retreat to their crystal in order to recharge their mana. Together, the three venture through what is revealed to be the capital city of a country named Lugunica. Their quest brings them to the slumps, they look for Old Man Rom’s loot house – a place where stolen and rare goods get traded.

By this time, viewers are tricked in to thinking that Re:Zero is a light-hearted and funny mix between Sword Art Online and Grimgar of Fantasy and Ash. The scenes of Subaru's demise at the very beginning of the first hour-long episode may well have been forgotten, thus adding to the shock of Subaru finding Old Man Rom brutally murdered before he gets swiftly disemboweled himself. Bleeding to death, Subaru watches helplessly as Satella gets murdered too. Blacking out, Subaru is certain he is done for... only to find when he opens his eyes, he is alive and well standing before the same food vendor he was only hours before.

Confused but with a clear memory what has happened, Subaru seems to have gone back in time. He is also the only one aware of what has happened, as nobody else remembers nor recognizes him. Adamant that he must saving Satella from dying, Subaru retraces his steps to find the tiny thief who stole Satella’s insignia in an attempt to change their fate. After meeting the culprit, Felt, a thief for hire at only fifteen years old, Subaru successfully passes his cell phone off as a rare magic item and trades it for the insignia. When Elsa, a scarcely clothed woman who initially ordered Felt to steal the insignia, arrives at Old Man Rom's house, she asks what Subaru intents to do with the insignia. After disclosing he wants to return the trinket to its original owner, Subaru finds himself disemboweled again... only to once again wake up unharmed and unrecognized at the food vendor he was hours before! Even though he initially decides to give up and just sell his phone as a rare magic item in order to live in Lugunica as a rich man, Subaru can’t forget about Satella, eventually deciding to once again try to change fate.

Whilst a continuous loop of events may sound tedious, Re:Zero doesn’t become boring. The initial hour long episode lures viewers in to a false idea of another gamer-stuck-in-MMORPG-story, only to suddenly shift to scenes of death and despair as the main character meets his end in a pool of his own blood. The story immediately picks up when Subaru finally succeeds to survive the encounter at Old Man Rom’s loot house with the help of a newly befriended knight named Reinhard. Subaru is taken to a huge mansion owned by a flamboyant figure named Roswaal L. Mathers, where Satella resides along with two identical twin maids and a peculiar librarian. This change of setting also seems to change the point where Subaru respawns, as he, once again, dies at the hands of an as of yet unknown enemy.

Art-wise, Re:Zero does not contain the scale of battles seen in series such as Sword Art Online, but scenes of battle are impressive nonetheless. The artwork is and remains of high quality throughout the series, with detailed backgrounds, unique fantasy creatures and distinctive characters that stay intact – no exaggerated chibi-models here. Whilst the scenes of Subaru’s imminent death are bloody to say the least, Re:Zero doesn’t dwell on these – of course, getting your gut sliced open will be messy, but the series refrains from adding more gore than needed for shock-value.

Main protagonist Subaru is fun to watch as he navigates through his new environment. Despite nobody understanding what he is talking about, he keeps referring and comparing everything to games, from calling others NPCs to even breaking the fourth wall. His former shut-in gamer lifestyle does prove to be valuable; Subaru easily accepts his new life in Lugunica and shows to be a logic thinker, making sense of his new surroundings with his game-knowledge. Satella meanwhile is direct but fair, with her heart in the right place. All other characters introduced so far, from Emilia’s catty companion Puck to the only briefly seen knight Reinhard, have got great potential for interesting background stories and underlying intentions – something we’ll expectedly see much more of as the series progresses.

Re:Zero differentiates itself from similar series with the added gimmick of Subaru’s ability (which he names ‘Return of Death’) to jump back in time. The series successfully blends humour with more serious action, along with an interesting cast and rich storyline. Only five episodes in, the series has raised more questions than it answered: who is Satella really? Is Lugunica really a gameworld? Will Subaru remain the only one who can come back from the dead? If anything, Re:Zero keeps viewers on the edge of their seat, and with twenty more episodes to air we’re hopefully in for a wild ride!

You can currently watch Re:ZERO -Starting Life in Another World- in streaming form on Crunchyroll.

9
Main protagonist Subaru is just dying for a do-over in this roller-coaster ride of a series.
COMMENT AND DISCUSS
blog comments powered by Disqus