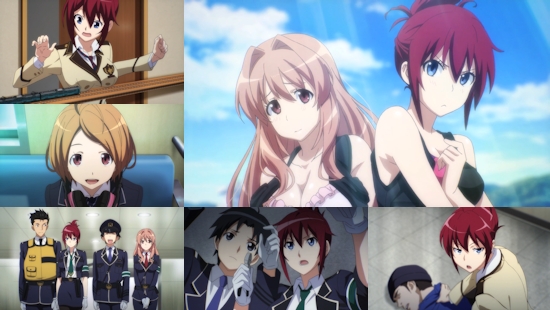 You don't have to be an enthusiast to admit that there's something cool about trains - they might not have the freedom to roam of a car or a plane, but there's an inherent majesty to these vehicles as they go about their business. This is an opinion that would surely be shared (and indeed expounded upon) by Naoto Takayama, a young man with an overbearing love of trains and an overwhelming desire to work in the rail industry.

As it happens, Naoto is in luck, for he exists in the world of Rail Wars - a world where Japan's railways were never privatised but instead exist as vast, well-run monolithic national institution. Then again, this is perhaps where his luck runs out, as in spite of having high hopes of getting to drive one of his beloved locomotives his application to join Japanese National Railways instead sees him assigned to its security division.

It's a position which seems ill-suited for this meek young fellow, especially when he finds himself having to fend off terrorist attacks, helping to defuse bombs and similar before he's even settled into his new role - it seems that not everybody is quite so thrilled with this nationalised public transport with utopia, and there are groups more than happy to do anything that they can to undermine it even if it means putting the service's passengers at risk. Luckily, Takayama isn't alone in this work, finding himself assigned to a group which includes the short-tempered but proficient Sakurai and the strong, smart Haruka, both of whom seem to adjust to their roles far more readily than our protagonist, even if he is perhaps more valuable to the department than he himself realises.

All of this sounds like a ripe and fruitful home for some great story-telling - there's plenty of room for political posturing and navel-gazing, space for lots of action as terrorist groups try to affect change on JNR and the nationalised rail system, and opportunities for character development aplenty as the security department's new recruits get to know one another and themselves. Oh, and we expect to be able to gawp at some cool trains along the way too, of course. Indeed, for the first episode or two it feels as if that might be exactly what we're going to get - the narrative arc of the opening instalments are broadly episodic but work reasonably well in their own right and give us some flavour of the world in which the show is set, the main cast of characters are fun to spend time with, and although any attention lavished upon the trains themselves is brief it certainly finds a comfortable place within the series.

However, the further you progress into the series the more all of these hopes and expectations are dashed upon the rocks - or rather, upon the breasts - of fan service. Yes, in spite of a concept that is rich with potential, all Rail Wars ultimately wants to do is to examine the forms and figures of its lead female characters whenever possible, throwing these cast members at Takayama whenever possible while ensuring that everything they do either leads to revealing high kicks, changing rooms, bathhouses, bikini-wearing or simply having to press some voluptuous flesh up against our protagonist in the name of titillation. Although we have no qualms with a little fan service to grease the wheels of a show's economy or deliver what some of its viewers might want, such moments should be incidental to the wider story being told at any given moment in time, yet each and every episode of Rail Wars seems more determined than the last to sacrifice its story in favour of giving the viewer some forbidden glimpses of whatever girl happens to be on-screen at the time.

Unfortunately, these stories aren't strong enough to stand alone under the oppressive weight of the bosoms pressing down on them, and thus episodes collapse, quite spectacularly at times - a story revolving around an idol performing despite receiving death threats is perhaps the most egregious example of what could have been a good mix of narrative and eye candy that goes utterly awry and ends up being a fan service episode with a sloppy tale that barely props it up. The entire series can probably be epitomised by a single scene at the start of episode five, where a model train is derailed and falls to certain destruction after colliding with a character's breast - imagine the train as its story, and you have a perfect allegory for the failings of the series.

The real frustration of Rail Wars is that sense of what might have been, and you have to wonder whether it was a feeling shared with this anime adaptation's production staff - rumour has it that the show has undergone major changes after the original light novel author proved to be unhappy with the original trailer created for the series, to which the producers had no choice but to comply. We'll never know what their original intentions for this production were, but the result of the rushed reanimation of the series shows noticeably in the first couple of episodes of Rail Wars in particular, with glaring continuity errors in the animation where gloves appear and disappear from a character's hands, and posters flip between different images from shot to shot. None of these problems cause any major issues to your viewing experience in themselves, they simply further speak to a troubled production whose potential has been undermined.

Those issues aside, the series does look pretty good in broader terms - the character designs are excellent (a good job too, considering how much we see of them) and ceaselessly eye-catching, and the ending credits in particular oozes cool in a way which the main content of the show never quite lives up to but makes a decent fist of. The Japanese voice cast do a decent job and we spotted no major subtitle issues, so the overall presentation of the series is sound.

With thoughts of series like Girls und Panzer still fresh in our minds as an example of how to take a very specific interest in a subject matter and craft a hugely entertaining series around it, our hopes were high for Rail Wars to deliver something similarly entertaining with trains at its core - that it gave in and instead chose simply to indulge in fan service and cater to the lowest common denominator makes it easily the summer season's biggest disappointment at this juncture, and unless you're looking for a fan service vehicle where the vehicle in question is a train then there's little reason to persevere with Rail Wars.

Rail Wars is available to view on-demand for subscribers to ANIMAX UK.

4
If you want a picture of Rail Wars, imagine a model train crashing into a female breast - forever.
COMMENT AND DISCUSS
blog comments powered by Disqus