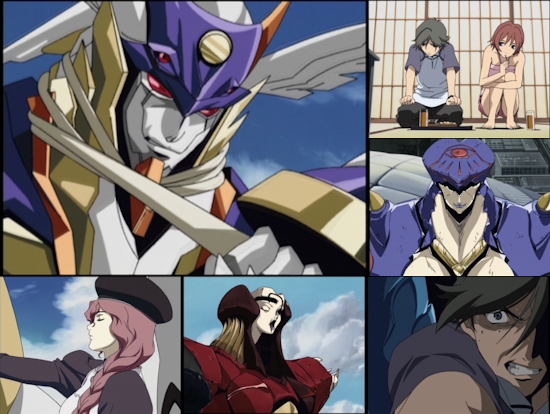 It can be tough producing a quality anime sometimes - to have a lot of love, sweat and tears poured into a production, only to see it dismissed by many because of its similarities to another series that it can never hope to match in terms of its impact, fan base or critical success. Such is the fate of RahXephon, a series (and movie) destined to be forever dismissed by many as nothing more than a Neon Genesis Evangelion rip-off. But is that really a fair appraisal of this original work from Studio BONES?

Set in a future where the world beyond Tokyo has seemingly been entirely wiped out, our protagonist Ayato Kamina seems to be enjoying a pretty normal life as he heads to school and chit-chats with his two friends. Any such sense of normality is sooner shattered however as chaos suddenly ensues in the wake of what appears to be an invasion of the city. With a mysterious woman trying to persuade him to come with her, an equally mysterious girl in a yellow dress who Ayato both recognises and doesn't appearing in the midst of the wreckage, and a strange "super weapon" revealing itself, normality suddenly seems a million miles away.

With a lot to take in early on in the series (not helped by some nastily mis-timed subtitled on episode two if you're trying to watch with Japanese audio), eventually things shake out to reveal what's really going on in this world - far from being the final outpost of humanity, Tokyo has in fact been sealed off from a fully functional Earth by an alien race known as the Mu. Although the Mu haven't shown themselves to have any designs for the planet beyond Tokyo, this soon changes when Ayato is removed from Tokyo Jupiter (as the strange space-time barrier the Mu have erected and the land within it have become known), leaving our leading man and his stolen humanoid weapon the RahXephon to fend off a variety of attacking "Dolem" as the battle between humanity and the Mu intensifies. But which side of this species divide is Ayato himself really on?

I suppose we should probably start out with the idea that RahXephon is some kind of "poor man's Evangelion", and to a certain degree it's easy to see why the series is associated with GAINAX's mega-hit. Aside from the more obvious comparisons - the seemingly post-apocalyptic world, the relatively organic nature of the shows "mechs" - RahXephon often evokes a feeling not entirely dissimilar from Evangelion in the way it goes about its business, from episode structure through to the show's soundtrack and the character-centric aspects of its narrative.

It's hard to deny that the way aspects of the series' tone ape Evangelion feel entirely deliberate, and occasionally even a little lazy, but dig a little deeper and there's far more to this series than these comparisons. For starters, the show arguably focuses more fully on its entire cast rather than concentrating much of its gaze upon a handful of them, and thus the latter part of the series has a lot of impact as a result with every character's actions and eventual fates mattering far more than simply seeing what happens to a group of named but ill-defined individuals. More importantly though, the wider goals of the show's narrative branches out in many different directions from Evangelion's, to produce an overall story that might not be able to best that series but still hits plenty of high points in its own right, no more so than episode nineteen which is possibly one of the best episode of television anime ever produced.

With those comparisons against that series out of the way, watching RahXephon in its own right is a compelling experience; one filled with strong characters, a smartly-created and depicted world, and shifting sands of allegiance and emotions that ensure that you never quite know how things are going to pan out all the way through to what proves to a pretty satisfying ending. If there's one criticism to be levelled at the series it's its pacing - at times, the show threatens to be either too slow-moving or too dense with information (or outright convoluted) to be easily enjoyed, and its opening instalments in particular require a certain amount of patience and dedication to watch before the viewer starts to feel rewarded for their endeavours at all. Give it the required amount of patience though, and those rewards will be rich indeed.

Also included as part of this complete collection is the subsequent RahXephon movie, Pluralitas Concentio, which rather bravely seeks to change things up somewhat to take the film in some different directions. Interesting to see though it is, these changes lose some of the elements which made the TV series a success. Worth watching though it may be, but don't expect it to hit the same heights as the original work.

Visually, and at over a decade old at this point, RahXephon is beginning to show its age in places. The TV show's artistic treatment is decidedly uneven at times, although never to a disastrous degree, and when it brings its A game it can still provide some excellent visuals. As a direct re-release of ADV Films' previous UK release of the series, this DVD edition is certainly passable in terms of its overall quality, with those aforementioned subtitle timing issues on episode two the only real gripe beyond the fact that some discs in the collection automatically start playing episodes whereas others open to the menu once you pop in the DVD.

Both the show's English and Japanese casts do a decent job so regardless of language track preference you'll be well served, although the overall experience is accentuated slightly by the provision of a 5.1 Dolby Digital soundtrack in English which makes limited use of positional audio to decent effect at times.

With a top quality series in full plus its subsequent movie all bundled together for around £25 at online retail prices, 101 Films' RahXephon Complete Collection is, quite simply, a bargain that shouldn't be missed. Its core series may not be as accessible as Evangelion and other shows of its ilk, but given time to work out its early kinks there's superb story-telling and world-building to be found here that combine to make full use of the show's strong, character-centric drama. If you missed out on this series first time around, now there's no excuse not to own this great series that has far more to it than high-level comparisons to other more popular shows might suggest.

8
A strong, powerful and smart series and intriguing movie, all bundled together at an unmissable price.
COMMENT AND DISCUSS
blog comments powered by Disqus