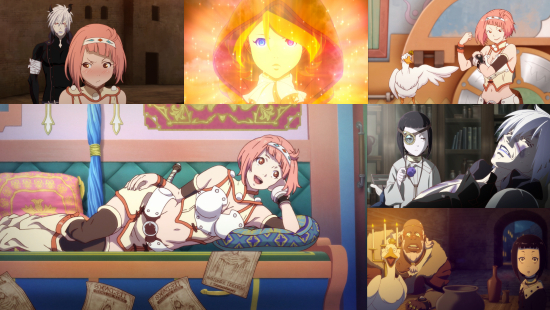 The conclusion to Rage of Bahamut: Genesis saw the world saved from an existential threat in the nick of time by the motley band of heroes we followed throughout the show. Having survived annihilation by the skin of their teeth, the received wisdom is that the land saved from such a fate would see its various races and peoples come together under a unified banner to enjoy the fruits of their new-found safety in peace and harmony.

However, as Rage of Bahamut: Virgin Soul is very keen to depict, this isn't the story within the world of Mistarcia. Instead, humans have gotten ideas above their station, seeking to persecute and kill or enslave the demons which live alongside them, while also exhibiting designs upon usurping even the gods that they share their world with. In other words, the founding ideas of supremacism and fascism have taken hold in Mistarcia, and as you might expect the results aren't pretty.

None of this really seems of much concern to Nina Drango however - a newcomer to the city, she's enamoured by the marvels of her new busy, bustling home, and her ridiculous feats of strength which bely her looks have found her a job - and popularity - as a labourer. In her own mind however, Nina's true calling is that of a bounty hunter, although in this regard she proves to be rather less successful - she has the raw skills, certainly, but her clumsy enthusiasm is yet to provide any results, and this young girl also has a rather large secret that is becoming increasingly troublesome in her city life.

To put it simply, Nina tends to get rather... hot under the collar around attractive men, of which there are no shortage in her vicinity. While this might otherwise merely be embarrassing, the problem for Nina is that this state of mind gives way to a transformation for this normally sweet girl. A transformation into a dragon. A very, very angry one.

When a failed bounty hunting mission to capture the so-called "Rag Demon" that has been terrorising humans across the city ends with Nina having one of her "episodes", she finds herself capturing the interest of the Rag Demon himself as a potential weapon to be used in his fight against the tyranny of the humans. It seems like city life is about to get rather more difficult for our protagonist, although in her favour she has a number of returning champions from the original series to help her out along the way.

Although I really enjoyed the original Rage of Bahamut, I will confess that it isn't a series that I was clamouring for more of, and so wasn't all that enthusiastic about the prospect of sitting down in front of Virgin Soul. However, three episodes in my lack of enthusiasm has been made to feel foolish, as not only does this series exhibit everything that I loved about the original but it also builds notably upon it.

Having commented on how much I enjoyed Rage of Bahamut's world-building previously, this world is just as compelling in Virgin Soul - its construction and vistas are a visual feast that somehow manage to mark themselves out despite taking in all of the standard fantasy world tropes, but the whole thing is taken into the stratosphere via the layer of socio-political commentary now also on show. While the first series felt very much built as a vehicle for its various characters to strut their stuff (and was enjoyable as such), Virgin Soul has the vibrant heart of a living, breathing city at its core. This in turn gives the series plenty to work with narratively even across these opening episodes - the Rag Demon is initially set up as a villain, but his motivations and manner of achieving his goals paint several shades of grey over the whole thing, and I'm fascinated to see how that plays out over the rest of the show.

The naive Nina is a perfect foil to all of this - initially disinterested in the politics and consequences of what is going on around her, but it seems very unlikely that this will last long. She's also an enjoyable focal point of the series in her own right - incredibly expressive in everything she says and does, a perfect home for the show's comedy, and with physical abilities that accentuates any action she's involved in.

Nina's expressive nature is also a high-point of the show's stellar animation - her cavalcade of facial expressions could carry this show on its own one suspects, but blend that with great character designs across the board, that tremendous world-building from a visual perspective we spoke of earlier, and some stupendous and dynamic action scenes to top it all off and you have yourself a real treat. Everything about Virgin Soul oozes style, from its opening credits (which bear some remarkable stylistic similarities to the opening to the Persona 5 video game) onwards, and it's arguably the show to watch if you're looking for jaw-dropping animation this spring so far.

That in itself may be high praise, but couple that quality animation with a story that already feels like it has surpassed the already enjoyable first series and characters to match, this is shaping up to be a real highlight of the season if it continues in this vein. The only downside is that you'll be shorn of a layer of understanding and enjoyment of Virgin Soul if you haven't seen the first season, although even this can be resolved by picking up the home video release of Rage of Bahamut: Genesis or watching it on FunimationNow.

You can currently watch Rage of Bahamut: Virgin Soul in streaming form on Amazon Video.

9
Virgin Soul's strong action, animation and world-building are complemented by a far more interesting narrative thus far to make for one of the spring's hottest series.
COMMENT AND DISCUSS
blog comments powered by Disqus