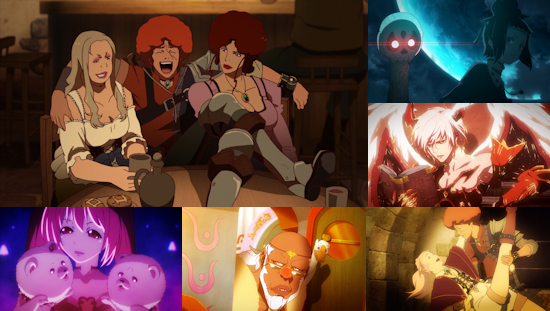 The words "based on a video game" can strike fear into the heart of anime viewers and film-goers everywhere - while anime is no stranger to adapting other forms of narrative into its own medium, the interactive nature of games makes it a big ask when it comes to crafting a successful series. However, in spite of those words of warning there should probably be a separate designation set aside for anime based around free-to-play mobile games - given that most of them have little in the way of explicit story-telling and instead simply set up a world and characters as the core hook for players, there's plenty of space for any adaptation to create whatever story they like within that setting. Such is the case of Rage of Bahamut: Genesis - based around a mobile card battle game, but otherwise free to roam within its own narrative, which is exactly what it does.

That narrative begins 2000 years in the past of its world, Mistarcia - a world which sees gods, demons and humans mingle and interact freely. As you might imagine, this makes for some uneasy alliances, but the emergence of a huge and vastly powerful winged beast known as Bahamut sees these parties unite to defeat and seal away its powers lest it destroy their entire world. Rather less sensibly, having defeated Bahamut it's decided that the key which seals it should not be destroyed but rather split in two, with one half given to the gods and the other half to the demons. I mean, it's not like a nefarious party would ever try to reunite them and try to leverage Bahamut's power once again, right?

Such a threat seems a million miles away as we fast forward to the present day and the fantasy-styled Wild West of Wytearp. Although the world is broadly at peace life in Mistarcia couldn't exactly be called quiet, as criminals and bounty hunters roam the land looking to make a living. It's one particularly slimy mercenary that we find ourselves joining for this adventure - Favaro Leone is part Lupin III, part Spike Spiegel as he hunts, flirts and lies his way through life to make ends meet with a notable degree of success.

However, his lies are about to catch up to him, as some flirtatious and entirely fabricated boasts of an adventure in a land called Helheim reach the ears of a strange girl who has literally fallen from the sky, Terminator-style - as it turns out, her goal is to journey to Helheim, and she'll do anything to learn of its whereabouts from Favaro. Unable to admit his lies, Favaro finds himself dragged along on this journey, which in turn sees him embroiled in an adventure more dangerous than he could possibly have imagined - the meek girl at his side is anything but, and her quest ties directly into the legacy of Bahamut and possibly the future of the entire world. Throw in some long-standing personal rivalries, a zombie necromancer and plenty more besides, and Favaro is going to have to work very hard to keep his head attached to his body...

I could make this review of Rage of Bahamut: Genesis very short by summing it up in a single word: entertaining. There are no vast depths to the show's world-building or characters, but what is here is all used well. All of the main characters are likeable in their own particular ways (even the slippery and roguish Favaro turns out to be oddly lovable) and work well together as a group as they're forced together by circumstances, there's some solid back story to spice up some of these character interactions, and the entire cast exist within a world that doesn't deviate all that far from typical fantasy tropes but does just enough to feel fresh and a little different from the norm. Oh, there's also a talking duck in the series too, which I suppose gives it a bonus point.

Beyond all of this, it's Rage of Bahamut's action set pieces that really make it stand out - the show's aesthetic and animation quality as a whole is tremendous (particularly its first episode which works hard to make a good first impression), but when it comes to the crunch there's some truly excellent action on show here that is often directed with flair and as a result is immensely satisfying to watch. These big-hitting moments are tied into a story that is workmanlike but largely enjoyable, albeit occasionally rushed as it tries to move on to the "next big thing" in a way which doesn't allow the events before it to breath.

Ultimately, that's all there is to say about the series - it doesn't over-extend itself or pretend to have any deep meaning, it's just a good old-fashioned romp through a fantasy world that looks the part and has engaging characters to match. If that's the kind of simple but effective entertainment that you can get behind, then chances are you'll have a good time with the show.

In terms of its presentation, the Blu-ray edition of this Anime Limited release looks great, and given those aforementioned action scenes will certainly be the preferable way to watch the series. The Collector's Edition also comes with a mammoth art book totalling over 300 pages, focusing on key frame animation from the show in a way which effectively presents itself as a flip book - this isn't exactly the most in-depth of included books we've seen from such a release, but it's something a little different and suits the strengths of this particular series well.

Finally, the show's English dub is also one of the better efforts I've heard recently - its well-delivered and its cast fit their roles to a tee with the sole exception of Kaisar Lidfald, who sounds older and doesn't fit the image of the character himself. As a whole though, both subtitles and English dub are very well presented and offer no impediments to enjoying the series.

As I mentioned earlier then, entertainment is very much the name of the game here - Rage of Bahamut: Genesis is a fun and uncomplicated show to watch, which might make it a tough sell to pick up on physical media over watching it in streaming form online (although its visuals do befit a Blu-ray release) but certainly has quite a bit to offer anyone willing to plonk down the cash for it.

7
An engaging world and characters mixed with some terrific action set pieces make for a simple but entertaining series.
COMMENT AND DISCUSS
blog comments powered by Disqus