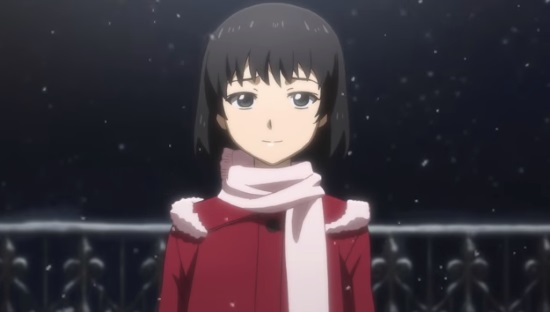 RErideD: Derrida Who Leapt Through Time 1-4

The Autumn season has started earlier than ever this year as Crunchyroll has come out swinging releasing the first four episodes of RerideD: Derrida Who Leaps Through Time in one go ahead of the series official release date. The question is, Will Derrida find hope or despair in the eyes of his new, early audience?

In the future a new kind of robot known as an Automaton have become part of everyday life serving as everything from news readers to personal assistants. They’re big business for the corporations who produce them so when one of the developers of their software, Derrida and his colleague, Nathan discover a flaw in the operating system of the latest model they find themselves on the run from the corporations desperate to avoid the truth coming out.

As they flee Derida falls into an abandoned facility and ends up accidentally locking himself into a cryogenic chamber (I guess the creators really liked Futurama). 10 years later he emerges into a dystopia as rouge Automotons rover the county killing all who stand in their way. Worse still, the men who tried to kill him are still very much around and still out for his blood. His only option then is to try and find Nathan’s daughter Mage to whom he gave a key that will allow him to try and fix the operating system. Whilst he’s at it he’d also quite like to know why he keeps hallucinating a little girl who looks just like Mage….

It’s so refreshing to have a big Sci-fi series that isn’t trying to hide every single plot point away for the sake of dragging out long mysteries and big plot twists. RerideD puts almost all its cards on the table from the get go and the result is a show full of engagement. Derrida isn’t exactly the most engaging protagonist but he feels much more like a real person rather than some over-blown shounen hero who ends fights by showing up which some magical ability, and the fact that he’s been given multiple reasons to find Mage helps to give him a solid motivation. The other characters this far are a little more one dimensional but are certainly still fun from the grumpy mercenary Vidaux and his daughter (who may be a machine herself – the Pinnochio boo she doesn’t want to know the end of is perhaps a bit of a giveaway) to Mage’s old friend Yuri who can’t quite bring herself to believe what’s going on.

This is the first series from the brilliantly named new studio Geek Toys and they’ve certainly done a decent job. Whilst the production values aren’t spectacular, they are solid with decent character design and some solid animation backing them up. Veteran director Takuya Sato (who’s worked on everything from Steins;Gate to Strawberry Marshmallow) brings a bit of flair to proceedings too with some neat camera angles and shot compositions which defiantly help keep you engaged.

Elsewhere things are a little less impressive. The soundtrack isn’t exactly anything to write home about and whilst Kensho Ono (perhaps more famous for being the Japanese voice of Harry Potter than for his anime work) does his best as Derrida, thus far the material hasn’t given him too much to really sink his teeth into.

All-in-all though it’s a solid start for both RerideD and Geek Toys. The series has established the setting and premise over the course of these first few episodes and everything looks set to really get things moving over the course of the season. The only problem of course, is that it’s going to be a month to wait for the new episodes whilst Japanese broadcasts catch up!

7
A surprise series that looks to be a solid bet for the season.
COMMENT AND DISCUSS
blog comments powered by Disqus