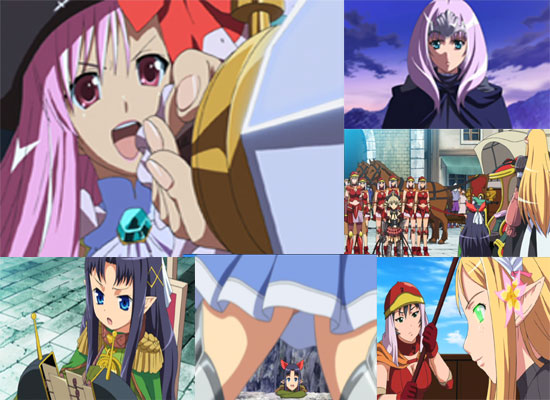 With a show that managed to slip right under my radar as well as coming nowhere near my actual ‘to watch’ list for the 2012 spring anime season, it was a good thing that I would go into watching this particular offering completely carte-blanche as it would mean I had no hopes to be potentially shattered under the weight of this show.  In terms of how lazy this show feels in its own execution and narrative, the series weights an absolute tonne.

The show itself was spawned from its predecessor, Queen’s Blade, which was itself born from a bunch of so-called "combat books". In regards to the original series I know absolutely nothing about it and after watching a few episodes of its latest incarnation I’d like to keep it this way.

From what information I’ve managed to gather by sifting through this mess of what they are trying to pass off as a plot, there’s something called a ‘Wizard Stone’ that has been stolen, although its power I’m still unsure about. I can’t say I care too much about what powers it may hold, and no doubt it will end up being something annoyingly clichéd. The main character, Annelotte, is wandering around place to place and getting into trouble. I refused to believe this was the main story to run through the show so I had to cheat a little and did some further reading and found out that (as the name suggests) Annelotte is going to set up a rebellion force to overthrow the evil Queen that’s ruling the country. Three episodes in and there’s no sign of this actually happening. Perhaps this is due to me being completely clueless regarding the first two series also?

I can’t help but feel that I’ve seen the characters numerous times in the past, at least in terms of their personalities and interactions with one another. Although as boring as most of them seem their actual designs are glorious - it’s just a shame that the show puts this to waste. The characters would be better suited in a fighting game; they all seem to show as much flesh as humanly possible without being completely naked. Then they’ll then get into a fight with one another, apparently for no reason whatsoever other than to strip one another of their underwear. The animators are in no way shy and never hesitate to throw in a panty shot, breast jiggle, squeeze or whatever else they feel they can get away with, which after watching three episodes suggests that there’s nothing they won’t do. They even throw in a little squid rape, which comes out of nowhere.

Now, at this point (three episodes in) I suddenly realised I was watching the show for completely the wrong reason. All my complaints about the story and character interactions have been made entirely superfluous. The audience that this show is aimed at don’t care what’s going on and simply watch it for big breasted women making passes at one another and fighting – even for these viewers, the series is censored and thus any real hope of titillation is removed.  Mind you, although the fights have little consequence on the story this early in the show I can’t help but think that they are rather nice to look at.

I find it difficult to believe that the action scenes in this show are actually as dull as the characters themselves. Which coupled together with the uninteresting plot, it results in what can only be described as a below sub-par show.

I won’t be pursuing this show any further. I suggest you do the same.

4
If you find panty shots appealing then great, part of you will like this. If you're not so easily won over then do yourself a favour and watch something else.
COMMENT AND DISCUSS
blog comments powered by Disqus