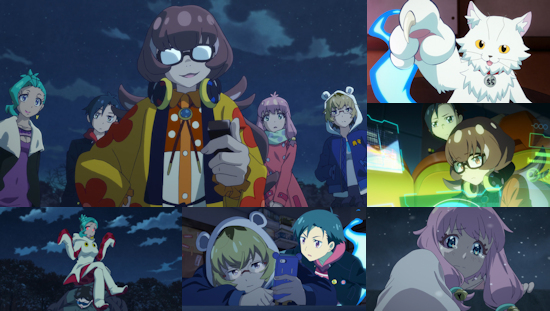 Dan's thoughts on the first three episodes of Punch Line were, it's fair to say, less than complementary. They were also entirely accurate - while I didn't have quite the tumultuous struggle to watch those early episodes as he did, it's fair to say that I wasn't exactly having a good time, and after a tremendous opening scene the experience as a whole was about as welcome as a turtle in your underwear.

Why, then, am I picking up the reigns to review the rest of the series? Well, first and foremost I am a glutton for punishment. Second of all, Punch Line is a fascinating series, albeit frequently not in the ways that it wishes to be. The good news is that Punch Line does get better... provided you make it through the first nine episodes of the show. In other words, you still shouldn't countenance watching this series, but be aware that somehow it manages to end on a quite spectacular high note.

Where Dan left the series, the show's protagonist Yuta was still floating around in his new ethereal form while trying to figure out what on Earth is going on. For all of its disadvantages, Yuta's existence as a spirit allows him to serve as our candid camera, looking in on his various housemates and helping us to build up a picture of their personalities and problems - problems which Yuta can occasionally exact some agency over with his very limited but growing ghostly skills.

This segment of the show is unfortunate for two entirely contradictory reasons. On the one hand, this whole meandering around goes on for far too long without really clueing us in on anything overly dramatic; on the other, there's clearly a huge amount of depth to the show's characters that we barely get to scratch the surface of. More on that issue later though...

It's only as we reach the half-way point of the series that we see the curtain starting to be pulled back on events, as a major moment of drama gives way to revelations as to the extent of Yuta's powers. This in turn reveals that he's embroiled in a situation that actually isn't new to him at all, only new to the current version of him. Yes, we're talking time travel and diverging timelines here, a la Steins;Gate, which begs the question - how does Yuta reach the desired timeline which saves the Earth from obliteration?

This leaves Yuta with a clear goal - to somehow prevent the tragedy which is just days away, without repeating the mistakes encountered by his past selves, even though he doesn't necessarily know what those mistakes were. With the super-powered ability of certain individuals, Yuta included, to "Yubify" in particular circumstances, and some impressive technology also indirectly at his disposal, there's a heady mix of elements that could win the day or cause a catastrophe at a moment's notice.

All of these elements build into the final two episodes of the series that finally unleash the terrific promise of Punch Line - witness one of the best mecha action sequences you're likely to see this (or any other) year as the highlight of the final race towards a possible victory, albeit one which comes with some incredibly painful decisions to be made. Much as the first episode held so much potential, so these last instalments deliver on that potential, which would be great news if it weren't for the matter of the meandering and often dull nine episodes in-between.

This state of affairs brings us to the true problem with Punch Line - it would work better as a visual novel. This is no surprise when you look at the credits of writer Kotaro Uchikoshi, better known for video game design and scenarios, and it perfectly explains the trajectory of Punch Line - when it has a single story beat to deliver on it's at its peak, but once things get complicated and we have multiple characters involved the series struggles to deliver or focus in a satisfactory way. Had this been a visual novel with a branching story line, offering up major "routes" for each main character, Punch Line could have offered up a number of tremendous stories, but hamstrung by a TV anime format it struggles to even deliver one. Is it any accident that the series is now getting a PlayStation 4 and Vita game? I'll leave you to make your own mind up.

One area where Punch Line is outstanding for the most part is in terms of animation quality - MAPPA have done a terrific job throughout, perhaps helped somewhat by the limited scope they have to work with in terms of locations given that almost the entire series is set around a single house and its surrounding area. Character designs are excellent, expressive and almost always on-model, the show's fan service takes a turn for the ridiculous at times but is rendered with both care and a knowing nod to its story-driven absurdity, and we have to make a second mention of that mecha battle near the end for being a potential "moment of the year" come our 2015 award deliberations. In short, this is a visually gorgeous show whose quality rarely dips, so if you're looking for a visual treat you'll find one here.

At points during my viewing of Punch Line I was left angry by what felt like a waste of my time, but by the end of it I simply felt sad - this show's story had so many tales it wanted to tell of its characters, their pasts and circumstances, and its rare high points showed the capability to execute superbly on its narrative when it could give due attention to individual story elements. However, those shining examples of what Punch Line is capable were far, far too few in number, and the many failings of its story-telling during the rest of the series plunge the work as a whole into mediocrity.

Perhaps someone can translate that forthcoming visual novel and maybe, just maybe, give us the Punch Line story that we deserve....

5
This series ends on an incredible high, which only serves to make most of what came before all the more disappointing.
COMMENT AND DISCUSS
blog comments powered by Disqus