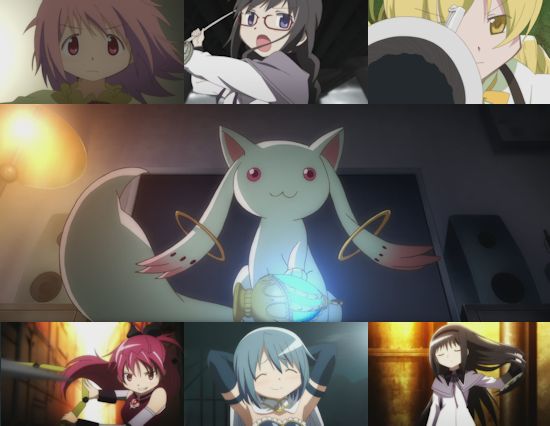 A strange, almost surreal world; a girl fighting an indescribable monster; destruction all around; an odd cat-like figure offering a way to resolve all of this conflict and devastation.  Thank goodness these opening scenes of Puella Magi Madoka Magica are nothing but a nightmare for its titular character Madoka Kaname, a distinctly average schoolgirl with a normal, loving family and an everyday school-life punctuated only by spending some time with her most precious friends.

But was it really just a bad dream?  Another seemingly normal day is followed by a shopping trip for Madoka and best friend Sayaka Miki - a trip which sees Madoka coming face to face with both the girl and creature from her dreams, the two of which seem to be anything but allies.  Stumbling into another surreal labyrinth out of nowhere and stalked by even more bizarre creatures, it takes the appearance of an unusually dressed but majestic girl to save them from their plight.  Introducing herself as a magical girl, Mami Tomoe and the feline-esque Kyubey become the gateway for Madoka and Sayaka into a world of magic, miracles and witches - a dangerous but spectacular world offering a fight for justice and the safety of their town, but with more than a few twists in its tale...

It's actually genuinely difficult to write about Madoka Magica in review form - so dependant is the series upon the progression of its story and the steady, consistent peeling away of the layers of its world to reveal the truth behind every decision that to even offer up a plot synopsis is fraught with the potential of spoiling it for a new viewer.  When it comes to summing up the series, less is more is the key here - in short, you'll just have to trust us when we say that this is the best television anime to emerge in the 21st century so far, and by some distance to boot.

Such high praise deserves some substantial justification of course, and from its first couple of episodes you might find yourself struggling to see where this praise is coming from - our early introduction to Madoka's world could (visuals aside perhaps) be lifted from any magical girl anime.  It's once you reach the climax of the show's third episode that the first sign of Madoka Magica's genius is revealed - the series has been playing with your expectations the whole time, only to pull the rug out from under you just as you had made yourself comfortable upon it.  From the end of episode three onwards, the series is relentless in revealing more and more of the wiring under the board of its world - every time you feel that you have a grip on what's going on another revelation throws your pre-conceptions into turmoil, leaving you with scant time to take a deep breath and re-evaluate what's unfolding before you.

Although many an anime series can boast such constant twists and turns, few have carried it out with the intelligent and expert touch shown here - once you're immersed into its world there's little requirement for any suspension of disbelief, as every major plot twist is revealed and explained with an almost chillingly cold and calculating logic, to the point where you can empathise with the ideals behind concepts that should otherwise be abhorrent.  By the time we reach episode ten of the series (which I personally believe could well be the best single episode of TV anime ever produced), every aspect of the world of Madoka Magica is laid bare before us in an astonish display of slick yet restrained action and raw, gut-wrenching emotion.

With such a strong, impactful storyline it would have been easy to skimp on Madoka Magica's visuals, but the series is triumphant even in this regard.  Although I'll be the first to admit that Ume Aoki's character designs, and the way those characters are rendered and animated in its world, can sometimes be jarring until you grow used to them, the wider aesthetic of the show is spectacular - a grandiose and futuristic vision of a town full of straight lines and striking rooms, which is offset perfectly by Gekidan Inu Curry's incredible work in creating a variety of muddled, colourful and outright insane settings when the time comes to fight a Witch.  If your jaw doesn't drop at the sheer, outrageous imagination of what's on display at times, then very few things are likely to impress you.  Add a soundtrack that is perfectly pitched and studied at conveying whatever the series requires of it throughout, and you have a complete package that is frighteningly close to perfection.

Given all these lavish visuals, this is a series that really is best enjoyed in Blu-Ray to make the most of its juxtaposition of clean lines and vibrant colours, and thankfully Manga Entertainment's UK Blu-Ray release is more than up to the task of showing off everything that is great about the show aesthetically.  The video transfer is clean, crisp and colourful, and aside from some odd subtitling decisions on disc one of the three Blu-Rays which make up the series (someone seems to have an irrational fondness for enclosing things in quotation marks when they have no need of them) everything is as it should be.  If you prefer to watch the series with its English audio option, you'll find an inconsistent dub that veers between excellent and ear-grating - overall, the English cast do a good enough job of conveying everything that's important about the series, but the uneven feel of the experience that comes from that would make the original Japanese audio our preferred option here without question.

The overall package of this release of Puella Magi Madoka Magica is, therefore, everything that we could reasonably hope to ask for - a glorious Blu-Ray release at an equally glorious price.  We could sit here and wax lyrical about the series itself all day long, but to be quite honest this is a show better experienced than relayed to you second hand as we could never hope to do it justice.  Put simply, this is perhaps the most important anime release of the last decade, that does for the magical girl genre what Neon Genesis Evangelion did for mecha anime in the 1990s - this means that some knowledge of the conventions the series is warping will be helpful (in other words, don't suggest this to an individual who is completely new to the anime scene), but provided you have a concept of how a typical magical girl series operates you'll be blown away by Madoka Magica.

As I mentioned earlier, to avoid spoilers in our discussion of this series you'll really have to simply trust our recommendation of this show - a plea that has made writing this review difficult, but makes my final summary so incredibly easy.

If you buy one anime release this year, buy Puella Magi Madoka Magica.

Buy this series. BUY THIS SERIES.

English and Japanese stereo audio with English subtitle.  The sole extras across the three discs of this release are text-free opening and ending credits, and trailers for other releases.

10
Intelligent, packed with emotion and with a story that demands multiple viewings, Madoka Magica has a legitimate claim as the best anime series of the 21st century so far. Yes, it IS that good.
COMMENT AND DISCUSS
blog comments powered by Disqus