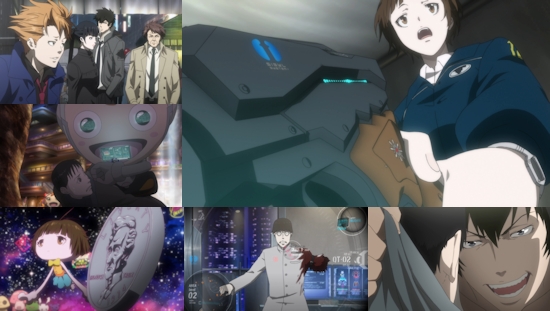 Science-fiction writing has no shortage of topics that it loves to revisit, but one of the more common themes that often raises its head is what technological advances might mean for the future of law enforcement. Whether it's sheer brute force a la Robocop or the ability to prevent crimes occurring before they even take place from examples such as Minority Report, there's no shortage of material to ponder. Indeed, even Production I.G themselves, the studio responsible for Psycho-Pass, have a notable entry into the genre of their own courtesy of Ghost in the Shell, and more specifically its Stand Alone Complex offshoot. It's a crowded market for a newcomer to make its voice heard within then, so is this series written by Gen Urobuchi (of Madoka Magica fame) capable of delivering a story that will engage both our brain and imagination?

Set one hundred years in the future, Psycho-Pass introduces us to a dystopia which, on the surface, appears to have been built upon an ideal system to ensure the safety and happiness of Japan's citizens. Dubbed the "Sibyl system", the all-seeing eyes of drones and security cameras constant keep watch over the populace, not simply to ensure that they follow the rules of law but also to keep constant track of whether their mental state might sway them towards becoming a potential, latent criminal of the future. This is done by measuring each individual's so-called "Psycho-Pass", an instant evaluation of their mental state represented by a coloured hue - those suffering from any kind of mental stress or potential for deviant thought are quickly treated and, in the worst cases, incarcerated for the safety of the populace at large.

On the front line of the Sibyl system stands the Public Safety Bureau's Criminal Investigation Division, tasked with both tracking down those seeking to avoid the system's judgement while also solving any crimes committed by those who have slipped through the net. Given their stressful place in a stress-free world, the MWPSB have a unique arrangement, with the Inspectors who serve as its detectives accompanied by Enforcers, themselves latent criminals who are used as the "hunting dogs" of their superiors. All concerned are also outfitted with Dominators, energy weapons that are capable of immediately identifying the crime coefficient of their target and passing immediate judgement on whether they should be set free, stunned and apprehended or, in the worst cases, instantly obliterated.

Into this setup enters new recruit Akane Tsunemori, a young woman with an impeccable Psycho-Pass and a natural aptitude and intelligence that would have allowed her to take up any career she might have wished for. However, life on the crime-fighting front line is a huge culture shock for this quiet, naive girl to be thrust into, apprehending a dangerous criminal on her first day in the job, and the benefits and dangers of the Sibyl system are quickly laid bare before her as she finds herself mired in the complex fallout of human emotions and behaviours that will serve her in good stead for the numerous challenges ahead.

On its surface, the early running of Psycho-Pass serves as something akin to a sci-fi crime procedural, via a number of stand-alone episodes that tells us everything that we need to know about this future world and the system that governs it, as well as expertly introducing us to its cast of characters. Most importantly, these early instalments are lightning fast in developing the rapport between Akane and the Enforcers, in particular a bright young thing (and former Inspector himself) by the name of Shinya Kogami who becomes an important muse and inspiration for Tsunemori as she quickly acquits herself as a vitally important and influential member of the unit.

As the series progresses however, some of these standalone stories begin to coalesce into a greater whole, as seemingly disparate crimes build a picture of organised rebellion against the core of the Sibyl system itself, itself bringing revelations that will cause Tsunemori in particular to question everything that she believes about justice and the very nature of the system that she serves to protect.

Even set against some of the well-known efforts we mentioned in that opening paragraph, Psycho-Pass certainly has a fascinating concept at its core - admittedly, the world it builds feels a little ill-explained in places (we suspect in service to adding things which "look cool" into the mix in a way that couldn't really be explained by any kind of underlying science), but the idea behind everything that unfolds is more than interesting enough to hold its own and the series never jumps off at the deep end when it comes to moralising about the Sibyl system, instead allowing its execution, benefits and disadvantages to all speak for themselves and leaving the viewer to decide the rest for themselves.

Of course, a good concept is nothing without execution to match (C: Control, we're looking at you), but thankfully Psycho-Pass is simply fantastic in this regard - it has an excellent cast of characters to call upon, not least Akane herself who grows markedly into an assured, confident and powerful protagonist over the course of the series, and also has an abundance of well-told stories to involve them in. Even the early world-building episodes word well as self-contained tales, and once the series delves into the real meat of its over-arching story it rarely misses a beat as layers are peeled away to reveal the truth and the stakes climb ever higher.

This brings us to another point about the series, that being its brutal and occasionally chilling treatment of its subject matter. From sexual assault to blood-spattered death in the first episode, Psycho-Pass is quick to let the viewer know that it isn't going to mess and around and coddle the viewer, and the crescendo that the series reaches at its half-way point is genuinely difficult to watch in all of the right ways to support the escalation of its subject matter. Indeed, there are a number of uncomfortable scenes throughout, but they always feel like a necessary part of the narrative and all serve to add power to the story being told.

As a whole, it's really rather difficult to find much to criticise about Psycho-Pass' story-telling beyond wishing that there were more of it to enjoy - a wish that will come true thanks to a second season airing in Japan this autumn, followed by a movie in 2015. If we did have to pick holes in its narrative, we could probably argue that the series isn't as smart as it likes to think that it is at times - if you care to dig deep enough you'll find myriad plot holes, but unless you're hell-bent upon comparing the show to Ghost in the Shell: Stand Alone Complex (and you really shouldn't, beyond a cursory comparison their similarities are few and far between) then Psycho-Pass stands strong as an excellent series in its own right that deserves all of the plaudits that it gets.

Beyond its story, the series is decently animated throughout - the worst issues which plagued parts of the show's TV broadcast have all been replaced with better quality animation for this home video release, and while the show's aesthetic is not necessarily appealing per se it does fit the dystopia it portrays to a tee, complete with character designs that are instantly recognisable whilst existing firmly within the "serious" feel that it tries to exhibit. Both English and Japanese language tracks are pitch-perfect in terms of acting performances, and subtitles are strong and relatively error-free throughout to ensure that you'll be able to enjoy the series to the fullest regardless of your proclivities along these lines.

We could sit here and spend a whole lot more time dissecting Psycho-Pass' story piece by piece, but that would just end up spoiling a series that is best experienced for yourself; even on a second viewing, its story remains strong and holds just as much power upon repeat viewings. Instead, let's just assert our opinion that Psycho-Pass is absolutely one 2014's biggest anime releases on home video here in the UK, and if you have a thirst for mature, thought-provoking story-telling then you definitely shouldn't miss this series as perhaps the best "cyberpunk" effort since Stand Alone Complex.

9
Having examined its intent and passed judgement upon it, our verdict is that Psycho-Pass is one of the must-buy releases of 2014.
COMMENT AND DISCUSS
blog comments powered by Disqus