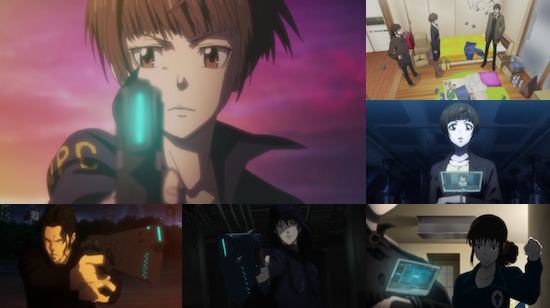 Psycho-Pass is something of a darling here at UK Anime; both the first series and the theatrical screening of Psycho-Pass: The Movie received glowing reviews from our editor-in-chief. However, in his Psycho-Pass: The Movie review Andy also takes a knife to the “disastrous” Psycho-Pass 2, and he’s not alone in that regard. When it originally aired in Japan this sequel was regularly derided and was widely regarded as being vastly inferior to the first series. Now we find ourselves staring down the barrel of the Anime Limited release of Psycho-Pass 2 in “Blu-ray Collector's Edition” form, is it really as bad as they say?

Psycho-Pass 2 sees Tow Ubukata taking over the reins from Gen Urobuchi, who so excellently penned the first series and movie. You may recognise the names, these are two of anime’s big hitters. Urobuchi wrote UK Anime favourites Puella Magi Madoka Magica and Fate/Zero, while Ubukata was responsible for Mardock Scramble and Ghost in the Shell: Arise. I am a big fan of much of Urobuchi’s work, but have still yet to be convinced by Tow Ubukata. He seems to have plenty to say, and clearly has a lot of good ideas. However, his execution is often a bit scattershot, and even somewhat lacklustre on occasion. Mardock Scramble was a mess of great ideas which were ultimately poorly executed. The film series quickly fell apart after the The First Compression, culminating in a very disappointing final chapter. While Ghost in the Shell: Arise was only redeemed narratively by the final movie, Ghost in the Shell: The New Movie. That is comfortably his best work to date, though one could argue he was painted into a corner somewhat by virtue of it being a pre-established series with a long and well defined history.

Ubukata works quickly to affirm that Akane Tsunemori is no longer the fresh faced Inspector of Psycho-Pass but has now become a strong senior Inspector heading up the MWPSB’s (Ministry of Welfare’s Public Safety Bureau) Division 1. Tsunemori is not only very sure of her own skills, but is also not afraid to challenge and even contravene direct orders if they contradict her own read on a given situation. Alongside Tsunemori is the rest of Division 1, a team mixing both old and new faces. The new faces in the team made a brief appearance at the end of the last series, but are introduced properly here. There are the Enforcers Sho Hinakawa, a shy holo expert who looks up to Tsunemori like a big sister; and the cool, calm, Sakuya Togane, who appears to be as astute as Tsunemori and quickly proves useful to the team. However, Togane has a reputation: his previous colleagues’ hues “turned black”, meaning their Psycho-Pass clouded so much they became classed as latent criminals. Is that coincidence or is there more to him than meets the eye? The new Inspector, Mika Shimotsuki, certainly thinks so. The eagle eyed amongst you may recognise Inspector Shimotsuki as a friend of some of last series’ victims. She is a very by the book Inspector, and as such she finds herself regularly at odds with Tsunemori’s decisions and actions to the point where she makes regular unfavourable reports to MWPSB’s higher-ups. She is not a character you will like, but that is rather the point, though by the end of the series you may even find yourself sympathising with her a little.

It doesn’t take long before we discover that there is a “ghost” loose in the world of Psycho-Pass. A ghost, it seems, who can’t be seen by the SYBIL system and has their sights set on bringing down said system. We soon learn that, like the original series before it, Psycho-Pass 2 doesn’t pull any punches, with frequent and often spectacular blood and gore. Compared to the original series it feels a little over-used here. While the first series was by no means shy in that regard it felt more restrained, only showing what was necessary to the story, whereas Psycho-Pass 2 revels in it, never missing an opportunity to explode a body part in a spine-chilling shower of blood. It makes for spectacular viewing, and harks back to the days when anime came on VHS and every other series seemed intent to outdo the last in terms of on-screen bloodshed. Hence, this is not a series for the squeamish, a theme that has almost become Ubukata’s trademark.

Unfortunately the shift of tone isn’t just limited to the blood-letting, but runs throughout the series. Psycho-Pass had at its core a deep contemplation on the police state and Orwellian visions of the future, as well as a somewhat prescient reflection of modern issues such as those surrounding the fallout from the Snowden revelations and just how much surveillance we are willing to put up with for the promise of greater security; around this was built a spellbinding story of Tsunemori’s evolution as an Inspector and growth within a team hunting a villain seemingly impossible to catch without crossing the bounds of the law. In comparison, Psycho-Pass 2 is more akin to a procedural police drama set in the world Psycho-Pass constructed, at least at first glance. You can see why fans of Psycho-Pass were so disappointed with this continuation; it is a very different beast indeed. However, that is not to say all the criticism is justified. If you can set aside the Psycho-Pass name, and look beyond the gore, you will find a competent, if a little lightweight, sci-fi police procedural.

There are no particularly big stand-out moments to be found here, or major reveals as the curtain is thrown back. No rugs are pulled out from under you as was the case in the first series. Though it is not for lack of trying. Ubukata sets out some very neat ideas, and gears up for plenty of high-octane set pieces. The direction is superb, with some fantastic action shots. But none of this can rescue Ubukata’s writing from itself. It is all a bit pedestrian by Psycho-Pass standards, and therein lies the problem. Everything unfolds just as you would expect, though that’s not necessarily a bad thing it is not what fans of the first series have come to expect. Make no mistake, this is an enjoyable series in it’s own right. Yes, you heard me correctly: Psycho-Pass 2 is not a bad series per-se. In fact by most measures Psycho-Pass 2 is very entertaining, and is arguably Ubukata’s best work after Ghost In The Shell: The New Movie. However, it is just not the Psycho-Pass we knew.

Where Psycho-Pass 2 really shines is in Anime Limited’s Blu-ray Collector's Edition. The box artwork is superb and really suits the release to a tee; I simply cannot overemphasise how good it looks in the flesh. Similarly the art book is exactly what you want from Psycho Pass, and the series itself looks fantastic on Blu-ray. It makes me long for a similar release of the first series, which received only a standard release from Manga Entertainment and was plagued by broken chapter makers, as was unfortunately common for their releases at the time.

Psycho-Pass 2, then, is a decent series in a fantastic package. It is unfortunately overshadowed by it’s own first series and subsequent movie, but still manages to be an entertaining show in it’s own right. If you can manage to adjust your expectations and are content with knowing this series does not quite provide more of the same series you already know and love, then you might just enjoy Psycho-Pass 2 on it’s own terms.

7
Ubukata colours the series black - it’s not Psycho Pass as we know it, but it is a competent police procedural.
COMMENT AND DISCUSS
blog comments powered by Disqus