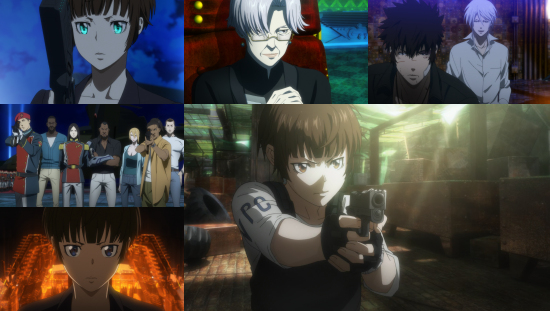 For whatever reason, we never got to enjoy a legal simulcast of the second series of Psycho-Pass here in the UK - well, I say "enjoy", but as sequels go Psycho-Pass 2 was a nigh-on disastrous extension of its excellent predecessor that is best left untouched. Given how badly it dropped the ball, you'd be forgiven for not expecting much of the show's theatrical outing that follows on from that second season... luckily, you'd also be wrong to not expect much of it, because Psycho-Pass: The Movie is an excellent film that builds on everything that made the original series so memorable.

It's the summer of the year 2116, and the Public Safety Bureau are about to find themselves facing an unfamiliar threat, as a call to arrest a group of illegal immigrants sees them facing a group armed to the teeth with firearms and advanced equipment. Although Akane Tsunemori and her crew prevail and arrest (or kill) the assailants, the underlying concern is a clear one - that a well-equipped entity is seeking to undermine the country's safety, and quite possibly the Sibyl system which underpins it.

As it turns out, there's a very obvious reason why a foreign group may want to attack Japan, as it's recently taken its first foray into exporting the Sibyl system to a nation overseas, offering it to the war-torn country of SEAUn as a tool to bring the civil war which has been tearing it apart to an end. However, the culprit responsible for the visit of these terrorists to Japan may originate from somewhere much closer to home - former Enforcer Shinya Kogami, who has been pictured fighting alongside SEAUn rebels.

Needless to say, Akane is both taken aback and intrigued to see a potential lead as to the whereabouts of her former colleague, and manages to arrange to be sent on an official visit to SEAUn with a view towards questioning and arresting Kogami. However, once mired in the midst of SEAUn's unrest and a land dripping in discrimination and tension, the true goals of her mission seem likely to blur considerably.

As befitting of its theatrical nature, one of the most exciting aspects of Psycho-Pass: The Movie is the increase in its scope - rather than simply revisiting the effects of the Sibyl system in Japan again, it instead posits a world where (as you might expect) other countries are keen to import this technology to control the criminality and violence amongst its own citizens. The world of Psycho-Pass is one torn apart by war across the world, and with Japan proving to be the only safe haven Sibyl logically seems like the cure to this war-torn world's ills.

It's a fascinating idea that is explored smartly by the film, showing us a world in which the extension of the Sibyl system has enabled discrimination on a massive scale while also completely tipping the balance of power heavily towards the military group with the foresight to employ the system in the favour. However, make no mistake: this nation was a mess before Sibyl made inroads into its society, so perhaps there's an argument to be made that this is an improvement on an out of control civil war regardless.

There's a clear allegorical (and rather cynical) bent to the film's story, with the Sibyl System serving to represent a broader brush of foreign policy, and the effects it can have on the stability of a nation or region. It's a story that will never be outdated given the constant churn of turmoil around the globe, but it feels particularly prescient as the crisis in Syria escalates at the time of writing this with a civil war that is now seemingly intractable and only spawning further dangerous elements. This serves as a reminder as to just why Psycho-Pass worked so well and why its sequel fared so poorly - the core premise of this series offers a fantastic potential window into our own present-day world, and when it's utilised smartly as it is here the result is a considered, thought-provoking story.

There's more to the movie than just talking heads and political posturing however; although the finale to the film is effectively just that, there are also some superb action set pieces scattered throughout the film. The tone is set in this regard by the big opener to the film which pits Akane and company against those aforementioned immigrants, with the rest of the film then punctuated by satisfying fist fights and gunfights that add spectacle to proceedings.

Speaking of spectacle, this is a great-looking film - yes, it's mostly grimy, gritty cityscapes and technology-laden rooms and buildings, but it fits the tone of the film just fine and there is some variety to the show's backgrounds to keep things fresh. The film's action is all expertly presented, and its quieter moments have plenty of detail and strong characterisation to keep things moving along nicely in visual terms alongside its well-paced story. Compared to the occasionally clunky animation of the series, it's a definite step-up in every way you'd hope for from a big screen Psycho-Pass experience.

One interesting aspect of note regarding the film's voice acting presentation is the sheer amount of English spoken throughout - admittedly this doesn't always work in the film's favour and occasionally creates some unintentionally funny moment, but is mostly proficient and a brave choice when it comes to depicting the wider world outside of Japan when so many series tend to wave away language differences without even explicitly mentioning them. In particular both Kana Hanazawa and Hiroshi Kamiya prove to be entirely comfortable when it comes to speaking English within their roles, with the former continuing to do a fantastic job of playing against type in terms of the characters she usually voices as Akane Tsunemori continues her growth into a chain-smoking badass of an Inspector.

Psycho-Pass: The Movie is everything that you might want from a theatrical extension of the franchise - it extends its world and concept markedly to explore some new ideas and aspects of social commentary, it's well-paced and it offers just the right amount of spectacle to offset its more thoughtful or character-driven moments. After the disastrous Psycho-Pass 2 it feels like a breath of fresh air, and although one or two characters and their motivations will be unknown to those who haven't seen that sequel the vast majority of the film is readily accessible to anyone who has watched the original series.

Psycho-Pass: The Movie was screened in Edinburgh as part of Scotland Loves Anime 2015.

9
A terrific and thoughtful extension of Psycho-Pass' premise makes for a compelling film that shows off this franchise at its absolute best.
COMMENT AND DISCUSS
blog comments powered by Disqus