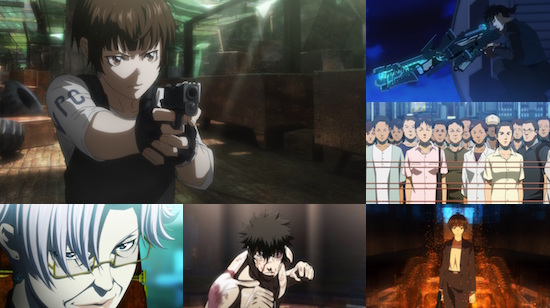 Regular readers may have noticed that we are somewhat fond of the original Psycho-Pass series here in UK Anime towers, though the second series was a little harder to love, it still contained much of what made the first series great. Our Editor-in-chief also proved to be a big fan of Psycho Pass: The Movie when it screened at last year’s Scotland Loves Anime. We are now a year down the line from that screening, a little older, perhaps a little wiser, and we are finally staring down the dominator of Anime Limited’s release of Psycho-Pass: The Movie.

The film begins in explosive (literally) style, with what appears at first glance to be a terrorist attack on a military convoy. However, we are soon introduced to a familiar face which poses some interesting questions about what we have just seen. Back in Japan, Inspector Akane Tsunemori and the rest of MWPSB (Ministry of Welfare Public Safety Bureau) have some illegal immigrants to deal with. A simple task for MWPSB you may think, but these immigrants appear to have some military training and are armed to the teeth - it looks like a terrorist cell has found its way into the heart of Japan. Thankfully for our friends at MWPSB the infiltration is soon brought to an end, with one of the series’ now trademark spectacular action sequences.

How could such a group infiltrate Japan, despite the watchful eye of the Sybil system? What was their aim? Is the relative peace of Japan under threat? Inspector Tsunemori is soon on the case, wishing to interrogate the surviving members of the terrorist cell. However, Sybil has a different, less conventional, idea which see’s our old friend Inspector Mika Shimotsuki sticking her oar in once again at the behest of Sybil.

It soon transpires that the terrorists came from SEAUn (Southeast Asia Union), a war-torn nation whose military rulers are looking to establish a Sybil controlled zone in the capital city Shambala Float, under the guise of bringing peace to the nation. However, that’s not the only interest Sybil has in SEAUn. Former Enforcer Shinya Kogami has been spotted, and it seems like he is helping the terrorists, or rebels as they prefer to be called.

Naturally this piques the interest of Akane, who demands to be sent to SEAUn so she can investigate. This highly unusual move is allowed by Sybil, but with a few stipulations - most notably that she only be allowed to travel on her own. It is when Akane lands in SEAUn that things really begin moving apace, seeing Akane caught between the slightly suspicious SEAUn military government and the Shinya Kogami backed rebels.

This setting allows the film to stretch it’s wings beyond the confines of Japan and the two previous series. Exploring the effects of the Sybil system in another country, especially one in as much turmoil as SEAUn, allows the film to explore new territory while still keeping a grounding in the ethos of the series to date. Despite being set some 100 years in the future Psycho-Pass: The Movie tackles some very contemporary issues, relating to the supposed benefits of the Sybil system and it’s potential for subversion or perversion. It is in this examination of contemporary issues, especially those around surveillance and interventionist foreign policy, that Psycho-Pass: The Movie really shines. Building on the foundations of the original series (and avoiding the pitfalls of the second) this movie gives a confident presentation of its world and a fascinating reflection of our own. Given our own government’s constant drive for greater security at the expense of privacy, it’s easy to see how foreign governments in the world of Psycho-Pass would be keen to import the purported benefits of the system, whatever the cost.

However, Psycho-Pass: The Movie is not solely about the political intrigue, and there is action aplenty to be found here too, ranging from one on one fist fights to full blown firefights, with plenty of explosions, drones, tanks and the like thrown into the mix - even the occasional Dominator. One of the highlights of the film sees Akane taking on an old friend in a fantastic hand-to-hand combat sequence. This scene really highlights the progress Akane has made up to this point - she’s no longer the green rookie Inspector of the first series. Another spectacular scene sees a band of government mercenaries taking on the SEAUn rebels. There really is something for everyone here, and in spades. Those who come for the action and those who come for the intrigue are given plenty to keep them happy. That’s even before we address the excellent animation and atmospheric soundtrack - the animation in particular takes a big step up over the series, really fleshing out details of the Psycho-Pass world and helping give a real visceral feeling to some of the action sequences.

Unfortunately we don’t (yet) have the Collector’s Edition on hand to be able to comment on the quality of the package, though I know a number of us have it on order, so I am sure one of us will update this review to discuss that package in due course. That aside Psycho-Pass: The Movie is an excellent continuation of the series, continuing the excellent work of the first series while deftly putting behind it the missteps of the second. The only real negative I could level at the film is that you really need to have seen the first series, and ideally the second as well. Though you would be mostly up to speed after seeing the first series there are a few instances where a knowledge of the events of the second series is beneficial, especially in regards to Inspector Shimotsuki’s motivations.

Psycho-Pass: The Movie is an excellent science fiction thriller, and this instalment helps raise the franchise up to the level of that of the other great Production I.G. sci-fi name: Ghost in the Shell. Dare I venture that the biggest compliment I can pay this franchise is that if we discount Ghost in the Shell content older than ten years then Psycho-Pass is probably the better of the two and arguably one of the best sci-fi efforts of the last ten years.

English and Japanese 5.1 audio with English subtitles. On-disc extras consist of Japanese and US trailers, and a US staff and cast commentary for the film. The Collector's Edition of the release also includes a 32-page booklet.