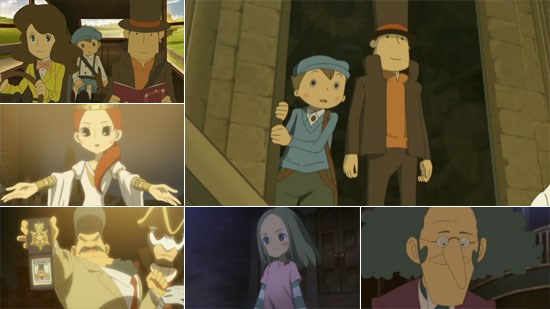 Professor Layton is anything but a small license - Professor Layton and the Curious Village was a surprise hit that had players of all ages solving fiendish puzzles, ably supported by a tight script and atmospheric cut scenes. So, unsurprisingly after four games in Japan, the Professor has managed to get into his own film, but will it show us the path of a true gentleman?

After completing their latest investigation involving Big Ben, the Professor and his ever-present apprentice Luke arrive back at the Professor’s office to reflect on past investigations. The Professor puts on a record called “The Eternal Diva – Janice Quatlane”, which has the pair reminiscing about their time at the opera house the Crown Petone and the investigation that took place there. Invited by the star herself, the pair become entwined in the competition to win the prize of eternal life.

And so we arrive at the first film in what could be part of a trilogy. For those keeping tabs, the film is actually set within the game universe, not long after the Professor and Luke met in The Specter’s Flute, the latest game to be released in Japan and part of the prequel trilogy of games that have yet to make it to Europe. Thankfully an encyclopedic knowledge of the series is not required, and the film stands very much on its own merits.

That said, the introduction of a hitherto unknown character, Remi, will come as a surprise to fans of the game. Remi is an assistant appointed to the Professor, and while she plays a significant role in the later games, English speaking fans will have no knowledge of the character. Thankfully she isn’t the main focus of the film and only serves to move the story along later... oh, and kick some serious ass too.

The film contains a number of puzzles for the Professor to solve, and should you be quick witted enough, you could try and figure them out before our hero, but after a while I just enjoyed the show and switched my brain to neutral...

Featuring direct input from the game developer, Level-5, and using the same studio behnd the lovely cut scenes from the game, it really couldn't be anything but faithful to the source. Traditional 2D shots mix effortlessly with the CGI, while the masterful direction keeps things flowing smoothly throughout.

Granted the character designs are a little more simplistic than the average anime fan is used to, but fitting within the world that has been crafted. The film is a fantastic mixture of colours and clean, crisp visuals from beginning to end. The final battle in particular is a breath-taking crescendo, proving that the Prof is just at home when it comes to action as he is when solving puzzles.

Sadly many jems have their flaws, and in this instance the flaw comes in the form of the voice acting. True, the film retains the cast from the game, but occasional lines in a game do not necessarily make for a great talent pool. With some characters veering between Dick Van Dyke's awful cockney to the rough and ready Lock, Stock gangster twang, it's a bit of a car crash. There's a lot to forgive here, but for those who are very patient, your endurance will pay off. Just.

Professor Layton and the Eternal Diva is exactly what most will expect from it - an entertaining tale from the Professor Layton series that is suitable for all ages. For those looking to get the younger generation into anime, Layton is by far the best way to do it.

The Extras disc wasn't provided for review, but we can confirm that the film comes in both Dolby 2.0 and 5.1 (English and Japanese),  and begins the feature with a trailer for the next DS game "The Lost Future".