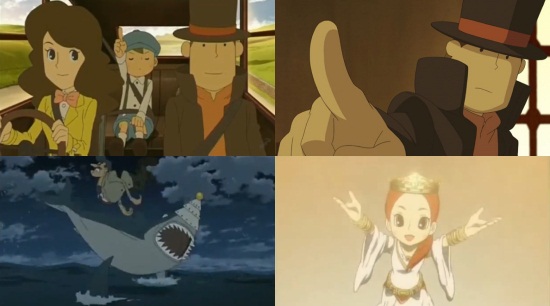 Professor Layton and the Eternal Diva

"The first game introduced us to Professor Layton and his apprentice. They came to a village of mystery and solved the puzzles that lay there"; "The second game ‘Professor Layton and the Spectre’s Flute’ told the story of their first case together"; "Now Professor Layton makes the move from game to movie" the narration proudly announces as clips from the Nintendo DS game cut-scenes breeze by.

It is here that we join our heroes trapped inside a clock tower. A single puzzle holds the key to their freedom and the answer to the current case. Layton closes his eyes, brings hand to chin and elbow supported by the other, he concentrates. The clues are all around him. The background washes away, all distractions disappear. He is thinking. He knows.  Pieces are set in place. Wheels set in motion. The delightful steam-punk clockwork ticks away, opening the doors. The camera flies outside to reveal their location: London, the Thames, Westminster - They're inside Big Ben.

Downstairs waiting on the bridge below is an assorted cast, including one Inspector Chelmey from Scotland Yard and a handful of police. Layton declares that he's solved the puzzle and knows who is behind it all. "The one to solve the puzzles..." he turns around, pointing "is you!". The crowd is shocked. The accused makes a short speech before throwing away the disguise. It was Don Paolo all along! He makes a stunning escape whilst police speed off in pursuit. Another case closed by Professor Layton and the end of the introductory scene.

Contrary to what this opening scene might suggest, Professor Layton is not a detective but an ordinary "British Gentleman" (complete with top hat and all). He’s an archaeologist with a penchant for solving puzzles, receiving letters from far and wide with little conundrums for him to figure out. In the case of the Eternal Diva, Layton receives one such request from a young lady. She's the Prima Donna of a new opera that goes by the same title. A friend of hers recently passed away and she has been approached by a young girl who claims to be the deceased. Despite her appearance she knows things that only the dead girl would have known, and what's more she says she has found eternal life. Complete with complementary tickets from the singer, Layton and company are off to see the performance. What they don't know is that this show will soon turn into a puzzle-laden game of death.  To the victor, eternal life; to everyone else, eternal sleep.

The whole film unfolds beautifully, like a Russian doll set with mystery boxes, each one containing a new puzzle within. There are even cunning little homages to the franchise's video game roots, such as when the first puzzle is presented in the opera house. There's even a genuine sense of mystery as characters are pulled into the secrets of a lost civilisation – one that carried the legend of eternal life. It’s hard not to get pulled right into the puzzle solving action as new conundrums come your way; the clues are all laid right out in front of you. Even without thinking about it, you find yourself constantly guessing at the back of your mind and much like any good riddle, even if you only get things half right (or completely wrong) you still like it.

The funny thing is that (as good as it is) the puzzle solving is only half of what the film has to offer. There is plenty of atmosphere, humour and good clean action to jazz things up. The setting is full of wonder, mystery and adventure whilst the plot contains surprising amounts of peril and quiet tragedy. As expected from the director of the Pokémon movies, the visuals are utterly amazing too. The art style reminds me of the old European cartoons that I used to love growing up with and some of my favourite Miyazaki works such as Castle of Cagliostro and The Castle in the Sky. Speaking of which, the climactic sword fight atop a crumbling castle is utterly breathtaking too.

7
A steampunk mystery-solving adventure for all the family.
COMMENT AND DISCUSS
blog comments powered by Disqus