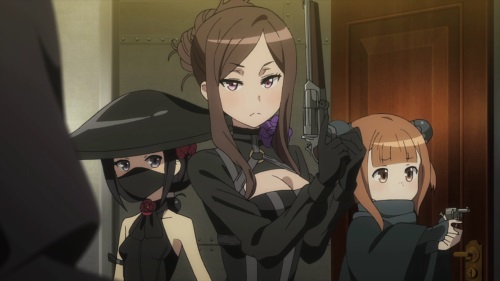 Soooo…. here’s the thing about Princess Principal. When it came out two years ago it was a fairly well received show albeit one that never really lingered in the memories of fans. Now however, a show about a post civil war Britain where the poor attempted to overthrow the government and ruling classes resulting in London being cut off from the rest of the country by a giant wall is starting to look less like light entertainment and more like a subversive suggestion on how to deal with Brexit….

Political commentary aside, Princess Principal deals with a team of 5 young women enlisted as spies of the poorer classes and assigned to carry out a variety of clandestine missions. Ranging from the 20-year-old Dorothy who can still just about pass for 15 to Japanese exchange-spy (is that a thing?) Chise who is (of course) a master swords-woman the team deal with everything from defectors to assassinations. All the while though there are more cards in play as the quiet Ange seems to be playing her own game which also involves Princess Charlotte who joins the team claiming she will help them overthrow the government so they can put her in charge instead….

The style of Princess Principal is undeniable throughout as the steampunk London is a fantastic place full of strange mechanisms and colossal airships and the characters who take us through the world are good fun too especially Beatrice and her amazing voice box. Once you start tying things together with some outstanding action set pieces and a soundtrack from Yuki Kajiura (of Noir fame) the series really looks set to come alive and you wonder why it never became the huge hit it looks like it should have been.

The reason, one suspects, is all down to writing and pacing. A swift look at the episode titles shows you that the series is taking itself completely out of chronological order which makes things pretty awkward. All the episodes bar the last two are stand-alone stories which helps a little but it means you're constantly being thrown back and forwards and it gets difficult to remember where you are (the series certainly doesn’t tell you). It also makes it really hard for the characters to get any momentum going as the lack of continuity means that character development has to happen in one episode and then either go away the next or stick and hop the audience won’t notice. This is combined with the overarching plot which isn’t really all that strong, never develops much because of the minimal continuity between episodes and then eventually never really resolves itself anyway.

To make things worse the series is lumbered with an excruciatingly bad dub as the cast put on such bad British accents that they could take lessons from Dick Van Dyke! Fortunately the Japanese cast don’t make any such attempt and don’t even force any attempt at speaking English at all really. Even their dub is fairly workman like though. It’s clear that the visuals and soundtrack are where the money was spent here and it has to be said they were worth every penny!

Ultimately Princess Principal ends up being a middle of the road sort of show where all it’s strengths from the amazing music and visuals are offset by poor decisions made in the story and character side of things. If you’re a big soundtrack fan then you could well end up picking this up for that alone or if you’re a die-hard steam-punk fan boy this’ll be right up you’re alley. For the rest of us though it’s not likely that you’ll hate the show but it missteps often enough that you’ll probably never love it either.