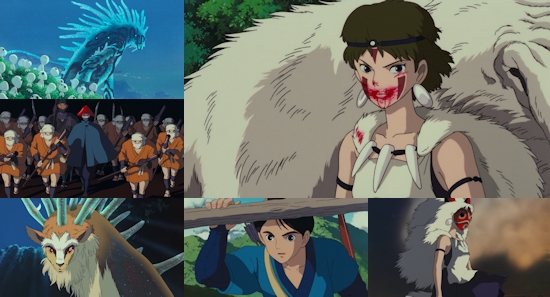 With the exception of the Oscar-winning Spirited Away and perhaps My Neighbour Totoro, one Hayao Miyazaki film is likely to be remembered by many as the watershed moment when they discovered the wonders of Studio Ghibli's output. That film is Princess Mononoke, and thanks to STUDIOCANAL's continuing series of remastered re-releases of the studio's films we now get to watch it again in glorious High Definition - does this classic still hold up well over fifteen years after it hit Japanese cinemas?

The films wastes no time in setting out its world, quickly throwing us into an attack on a village by a boar seemingly possessed by a demon. While this attack is thwarted by a boy named Ashitaka, who we learn is a prince of his tribe, it does come at a cost, as the tendrils of this demon infect and corrupt Ashitaka's arm - an infection which could prove fatal if not cured.

Thus, Ashitaka sets off on a journey in search of the cure to this ailment in the land from which the boar, actually a God enraged having been shot by an iron ball from a weapon of some description, originally hailed. Despite his condition worsening, Ashitaka discovers those responsible for the God's wound, led by a woman named Eboshi who seeks to create a safe, self-sufficient town by plundering the land and resources of the area with little care for its flora and fauna.

Needless to say, Lady Eboshi and her subjects have made themselves powerful enemies, not only within mankind but also amongst the creatures of the forest. Leading the rebellion against her actions are a pair of wolves, led by San - known to Eboshi as Princess Mononoke - a human raised as a wolf having been abandoned in the forest as a child. As these conflicts escalate, the future of both humanity and the forest itself are put into jeopardy as interest focuses upon the mysterious Forest Spirit which protects the area.

As Hayao Miyazaki's films go, Princess Mononoke is perhaps one of the most overt about the director's worldview - its environmental message and its depiction of mankind effectively "fighting against" nature for its own benefit are both textbook Miyazaki. Not that this is to film's detriment - far from it, it makes for a passionate and compelling film that still manages to look at both sides of its story by examining the motivations of its human elements and why they're so insistent on encroaching upon the land which has given them so much.

In many ways it's the delivery of this story that really makes it stand out even in the midst of the Studio Ghibli's impressive filmography - rather than the warm, welcoming world more typical Miyazaki's films in particular, the world of Princess Mononoke is a harsh one where death is never far away, and the brutality of conflict brings the demise of those involved in visceral and spectacular fashion via blood, beheadings and severed limbs. This isn't a gory film per se, but it isn't afraid to depict the harsh realities of what happens when swords, guns and arrows meet human or animal flesh either.

Alongside this, and with the exception of its final act which threatens to drag a little when it bogs down in its myriad elements, the movie is also perfectly pitched and paced, from Ashitaka's initial conflict onwards, keeping the plot moving forward in an immensely satisfying way. It probably goes without saying that this is expertly aided by the film's visuals, which are fluid, detailed and absolutely stunning in this new High Definition transfer. As per every other Studio Ghibli Blu-Ray release thus far, this is a worthy upgrade to the film's image quality that is well worth putting your money down for as it simply blows away the prior DVD release in allowing you to enjoy the care and attention put into the backgrounds and use of colour throughout the movie.

One area where we may be a little disappointed with this Blu-Ray release is with regard to its audio quality - for the most part, it's excellent, but it seems to lack some of the bass and punch where we'd expect it to come to the fore during weapons firing and the like. It isn't a major issue, and the film's score and dialogue are both crystal clear on both Japanese and English tracks (complete with perhaps the best English dub for a Ghibli film, of course), we just wish the overall audio experience was a little more dynamic.

Small quibbles aside though, Princess Mononoke is another Studio Ghibli film which demands to be owned on Blu-Ray without a doubt - it ranks alongside the studio's best works, and this new transfer allows you to fully appreciate its visual majesty alongside what is already a classic of the medium.

9
This compelling, visceral film shows Hayao Miyazaki at his best, and this new transfer Blu-Ray adds even more visual impact to this stunning film.
COMMENT AND DISCUSS
blog comments powered by Disqus