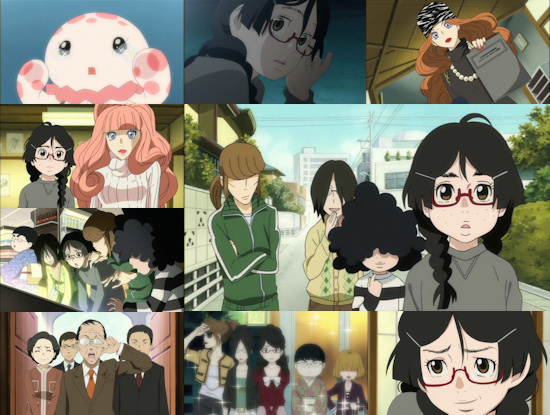 Everyone has their interests and obsessions, but not everybody takes them to extreme lengths - however, given that you're sat here reading an anime review on a web site dedicated to the pleasures of this (and related) mediums, chances are you can at least empathise with, if not relate to, taking your love of something particular to its logical but overblown confusion.

Assuming that starting point (and with apologies to anyone who has stumbled across this page while searching for how to treat jellyfish stings), you should find yourself right at home with the main cast of Princess Jellyfish - a group of unabashed female "otaku" of various persuasions who live together in a Tokyo apartment building known as Amamizukan; or, more fondly by its residents, as "The Nunnery" on account of its all-female residence and the distinct impossibility of any man ever so much as setting foot inside its walls.

While these residents run the gamut of otaku-dom from a Romance of the Three Kingdoms fanatic through to a woman with a fetish for ageing men, our main focus rests upon Tsukimi - a girl who, as the title of the series suggests, is utterly fascinated with and obsessed by jellyfish.  While the reasons behind this obsession are unveiled relatively early on and built upon as the series progresses, in the short-term her love for these sea creatures leads her into an unlikely friendship with what Tsukimi herself would describe as a "Stylish" - a woman with an innate fashion sense that quite literally petrifies Tsukimi and her friends.  However, when this "Stylish" helps Tsukimi to rescue a jellyfish being poorly looked after in a local pet shop, for some reason she simply won't leave our protagonist alone, eventually becoming more and more entwined into Tsukimi's life.  Oh, and did I mention that the woman in question isn't actually a woman at all?

With the cross-dressing Kuranosuke integrated (albeit uncomfortably) into the fabric of Amamizukan, Princess Jellyfish becomes a meandering tale of love, friendship, understanding and teamwork that takes in so much different topics and story ideas that it's hard to really pin the series down in any specific way.  I could probably drill in to some of the show's many plot threads further here, but to be honest much of the joy of watching Princess Jellyfish comes from watching the series shift, grow and move in an organic fashion as Tsukimi finds herself dragged beyond her jellyfish-tinted comfort zone out into the wider world on what proves to be a real journey of discovery for her.

Although this series could easily have gone down the straight "otaku comedy" route by poking fun relentlessly at its group of obsessives (and it certainly enjoys gleefully depicting the manic passion exhibited by its main characters), Princess Jellyfish actually has something far more beautifully subtle and important to say about the human condition - namely that everyone has a safe haven; a hiding place that they occupy to run away from the harsh realities and emotional pain that the world can bring, whether you're the country's Prime Minister or a young girl who misses her mum.  Amamizukan's residents may wear their protection mechanisms from being hurt on their sleeves, but in reality they're no different from Kuranosuke as he hides behind a wig and make-up beyond how they exhibit their passions and strategies for coping with a harsh and uncaring world.  This makes for a sobering look at otaku culture, what drives it and its demonisation that could probably fill a book in its own right.

Luckily, the series is nowhere near as straight-laced and boring as I've just made it sound - from its riffing of classic Hollywood movies in its opening credits onwards, this show is as canny as it is self-aware, and its more direct nods to pop culture are bolted to a story that has clearly learned a lot from the television and cinema it apes, with an almost old-fashioned delivery that recalls romantic comedy movies and TV sitcoms from years gone by as it goes about its business.  For the most part, it works remarkably well as a result - the entire series feels fresh and different in the face of most anime comedy via a mature outlook and train of thought that is presented in a fun and colourful way throughout.  The only point where the series disappoints is with its ending, in that it barely has one - although its pivotal plot thread is resolved, so much is left up in the air that it's hugely frustrating to see all of the characters you've come to love left hanging.  Such are the perils of adapting an on-going manga into an anime.

In terms of presentation, Kazé's release via Manga Entertainment here looks as good as you could hope from a UK DVD release, while also containing an English dub which works wonderfully with one exception - the voice actor for Kuranosuke, who clearly struggles with said character's cross-dressing proclivity and puts on a "girlie voice" that sounds more like someone's grandma than a teenage hipster!  A nice inclusion on the third disc of this set is all of the bonus material OVA content provided with the original Japanese releases, which offers some scattershot but occasionally fun asides - if nothing else, check out the final "Jellyfish Heroes" special starring chauffeur Hinamori for one of the most brilliantly realised gags of all time.  One gripe we do need to air is that if you choose to watch the series with Japanese subtitles you'll find yourself losing a lot of subtitles reserved for on-screen signs, which only seem to pop up when English audio is selected for some reason.

At this juncture, we should also mention that the series is currently only available in the UK via it's "Collector's Edition" release, which sees the three DVDs which make up the series bundled together with a plushie of Clara, the show's jellyfish insert character.  Sadly, we didn't receive Clara for review (journalists need things to hug too!) so we can't comment on the quality of the plushie, but it certainly looks suitably adorable to our soppy, needy eyes.

In spite of its inability to provide a completely satisfactory ending, Princess Jellyfish is still an absolute triumph - a smart and energetic comedy that knows when to provide an emotional punch, and with sufficiently lovable characters to assist in doing so.  Dig a little deeper beneath the laughter and you have a story that does far more than just lean upon otaku culture for cheap giggles while still proving to be easily accessible for all and sundry, which is very much to its credit indeed.  If you like the idea of a romantic comedy with a heart of gold and a sharp eye for the foibles of human nature, Princess Jellyfish is as good as it gets.

Japanese and English audio with English and French subtitles.  The third disc of this release contains both six Jellyfish Safari and four Jellyfish Heroes bonus mini-episodes.

8
Its weak ending may frustrate, but Princess Jellyfish is otherwise a fun and touching story which meanders enjoyably through its tale of love, life and finding a place in the world.
COMMENT AND DISCUSS
blog comments powered by Disqus