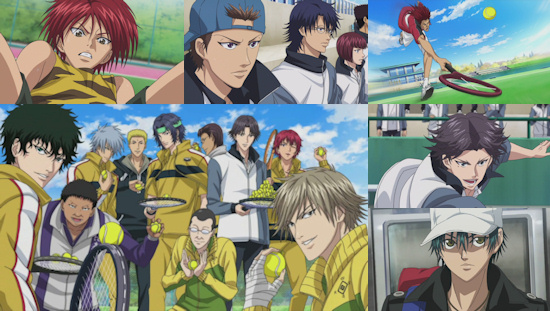 Despite having never watched or read it before, The Prince of Tennis is one of those series that it's hard not to at least hear the name of floating around the corridors of anime fandom - as a massive and long-running series in both anime and manga forms, its place as a popular shounen franchise is beyond doubt even if its never particularly managed to penetrate the strawberries and cream view of tennis enjoyed by the average British person.  Since its debut in 1999, it's fair to say that The Prince of Tennis has never been away, with the end of the original series soon replaced with the debut of The New Prince of Tennis, and it's this series which gets the anime treatment in 2012 courtesy of a joint production between Production I.G and M.S.C.

As per its predecessor, The New Prince of Tennis (aka The Prince of Tennis II) has as its main character diminutive genius with a racket Ryoma Echizen - if you have any doubt as to his abilities, the first scene in this series sees him catching a train by using his skills with a racket to delay its departure long enough for him to jump on board.  Who knew that playing tennis would be so handy in everyday life!

The reason for Ryoma's rush is the imminent start of a training camp for Japan's finest tennis players - a camp which has been opened up to some of the most talented middle school players for the first time, much to the disgust and disgruntlement of the older high school players already well-versed in how this rather unique establishment works.  This is certainly no ordinary camp, with the first task for its wannabe stars requiring them to catch tennis balls thrown fro a helicopter, before the remaining members are set against their own friends in tie-breakers games where the loser will be cut loose without so much as their bus fare home.

In other words this is competitive tennis, shounen style - with every character sporting ridiculous abilities and special moves that Andy Murray can only dream of, some of which just "aren't tennis" as they aim to knock out or otherwise physically disable their opponent rather than winning points quickly and cleanly.  This makes for a pretty brutal take on this normally gentlemanly game, and it's occasionally hard not to laugh as player spin and pirouette through the air to take shots, use rackets with just two strings as a handicap and engage in copious amounts of braggadocio towards anyone they see as an opponent.

As that description might suggest, The New Prince of Tennis is very much typical shounen fare in its style and execution, so if you're looking for a realistic, considered or otherwise tactical view of tennis then you can forget this series right off the bat (or racket, rather).  If that isn't a problem for you on the other hand, then I have to admit that this series is rather accomplished at what it does - after introducing more characters than you could ever hope to remember in its first episode, it finds itself with plenty of room to keep the tennis action coming with little need to pause for breath thanks to that hefty character roster.  Whereas shounen anime often falls into the trap of concentrating too much of its time on a single conflict, these early episodes of New Prince of Tennis are always happy to flit from one match to the next to keep things fresh - you might not have a clue as to who is who, but it'll never take you long to figure it out, and there are enough twists and turns to avoid any one scenario from becoming entirely predictable.

Visually, this might not be a series which astounds you, but again it has a certain sheen to it that makes its presentation effective all the way through to its rather iPod commerical-esque ending; despite its static shots, speed lines and a cut of animation when a player serves which you'll see at least half a dozen times an episode, characters are soon quickly recognisable, and you can't fail to notice who the relative "good" and "bad" guys are as soon as they arrive on screen.  The only real pitfall of the show is that you can see where it's headed ultimately with little difficulty - all of the surprises the series has up its sleeve come to naught when you it's clear who will succeed and fail at the training camp, even if it is potentially entertaining to see how they get there.

Overall, these initial episodes of The New Prince of Tennis are pretty much exactly what you'd expect from them - they're overblown and entirely daft, but you can't deny this over-the-top treatment of the game of tennis can be quite entertaining from time to time.  This isn't enough to lift it into the realms of a king (or even a prince) of shounen manga, but if you like shounen series or sports shows and have some time to burn then The New Prince of Tennis proves to be an accomplished and fun, if unspectacular, effort.

You can currently watch The Prince of Tennis II in streaming form right here on the UK Anime Network!

6
It won't set the world alight with its distinctly shounen take on tennis, but this is an accomplished and fun adaptation that has enough entertainment value to be worth a brief look.
COMMENT AND DISCUSS
blog comments powered by Disqus