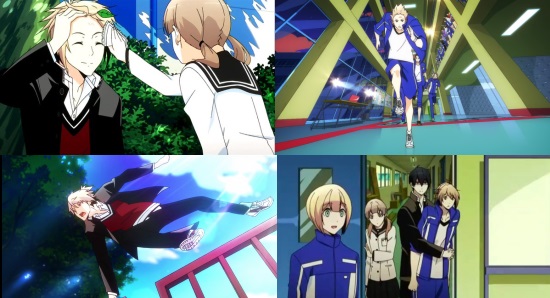 Sports anime have been popular for years and have showcased almost every sport imaginable, with many sports receiving a whole slew of offerings depending on their current popularity in Japan. Given this, when a series tries to be original it can be awkward to find new subject matter, so it’s become more common to make up your own sport - hence this season's sporty little number, PS Vita Otome game adaptation of sorts Prince of Stride Alternative, which uses a new sport based on parkour racing.

After being entranced by a recorded Stride match, Nana Sakurai decides to enrol at Honan Academy at all costs to join the team, although she wants to be the manager rather than a runner herself as she’s fascinated with the concept of the ‘Relation’ - essentially a timed high five that takes the place of a relay baton and also provides endless subtext for the fujioshi crowd. Things are a little awkward at first however, as she and fellow newcomer Takeru arrive at the clubroom to discover that the Stride club has been reduced to three members and merged with the Shogi club. Fortunately a brief search uncovers the (not very) elusive fifth male member they need for the team to compete in the summer tournament, with Nan taking the role of the ‘Relationer’ who monitors the race through GPS and makes sure the runners chain together properly. The race is therefore on for Honan to reclaim its former glory.

Prince of Stride very clearly divides itself into two halves. The first is character-led comedy-drama, which is pretty pedestrian if we’re being honest as all the characters are more or less by-the-numbers cardboard cut-outs with an arbitrary character trait to define them, from starting every sentence with a proverb to a penchant to feeling up other men’s legs (did we mention that the fujioshi crowd will love this show?) It does nothing in this respect that you haven’t seen a thousand times before, and it doesn’t help matters that despite being initially presented as the series lead, Nana doesn’t get anything to do here and is pretty passive and wishy-washy. There isn’t really any reason why she couldn’t have been one of the runners on the team and taken a more active role in matters - yes the series is aimed at the predominantly female market but surely this shouldn’t preclude the series from having a strong female lead?

On the other hand the Stride matches themselves are the bee’s knees and are brilliant to watch. Parkour is something that is ideally suited to a high-paced anime adaptation and it’s literally about people doing things that you feel shouldn’t physically be possible. The series really shines during these segments as the teams compete around more and more elaborate courses with some really dynamic camera work to highlight things further. These segments are really what the series is all about and the rest of the show is basically reduced to filler to take up screen time without eating up too much of the studio's schedule before its time for the big race and the series can let rip.

This divide clearly shows up in the visuals of the show too, which markedly improve once the guys start running before dropping off again once the race ends, although to be fair it’s never poor, just average. The same holds true for the soundtrack, which is pretty much unnoticeable outside of the running segments of the show.

There’s little else to say about Prince of Stride Alternative. If you’re willing to watch fifteen minutes of harmless gumph to enjoy five to ten minutes of brilliant action then you’ll be glad that you did as it’s generally worth the wait. Otherwise you won’t really be missing much if you chose to put on the new episode of something else instead.

You can currently watch Prince of Stride Alternative in streaming form on Animax UK and DAISUKI.

6
Running steadily in the middle of the pack.
COMMENT AND DISCUSS
blog comments powered by Disqus