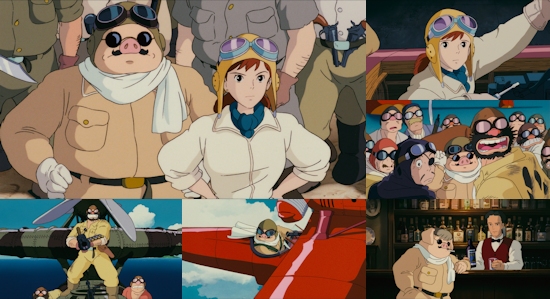 As we continue to enjoy the expansion of Studio Ghibli's output onto Blu-Ray here in the UK, this month has brought us another classic to receive the remastering and High Definition release treatment in the form of Porco Rosso - a film which perhaps isn't as well-known as the likes of Spirited Away or My Neighbour Totoro, but a Hayao Miyazaki effort that is still much loved in its own right.

Set in the period between World War I and II, the film follows the adventures of titular character Porco Rosso (The Crimson Pig in English, if you prefer), a former ace fighter pilot turned bounty hunter of sorts. Although most undeniably a pig in terms of his appearance, this wasn't always the case - Porco was once a human named Marco before some kind of curse left him in his current state.

Bounty hunter he may be, but Porco is most certainly one of the good guys in this story, as we witness right from the off as he rescue a group of schoolchildren from an attempted hijacking of their plane by sky pirates. It's these pirates of the air that prove to be Porco's bêtes noires - even more so when this rag-tag group hires a dashing American ace pilot and wannabe actor named Curtis with a view towards disposing of Porco; a contract aided by the fact that Curtis is also chasing a woman who only has eyes for his new rival.

Ultimately, Curtis' attempts to dispose of Porco lead to our titular character meeting a prodigious young female mechanic named Fio, which leads to the pair undertaking some even greater adventures as Curtis' determination to defeat Porco comes to a head via a final, epic dogfight.

In broad terms, Porco Rosso is arguably one of Studio Ghibli and Hayao Miyazaki's simpler works - what you see is what you get, and there's little in the way of hidden depths to be explored within the film. This is however, not a criticism in the slightest - the simple pleasures of watching the movie are one of its more appealing points, and it doesn't need to deliver anything overly complex to be engaging and enjoyable.

This is largely achieved due to the charm of both the film's setting and, perhaps more fundamentally, its characters. Porco himself is a nicely fleshed out and well-rounded (both literally and figuratively) character, Fio is your typical strong female Ghibli character yet no less likeable because of it, and the rest of the cast walk the line between cartoon character and believable individual with aplomb. Add exquisite pacing to the mix and you have yourself a great film, pure and simple.

It's difficult to find anything new to say about any Studio Ghibli work in terms of visuals and animation quality - as ever, the film is beautiful in its fluidity and packed with detail when required, with Miyazaki's love of aircraft in particular becoming readily apparent whenever Porco's vehicle is required to take centre stage. As per previous UK releases of Ghibli works from STUDIOCANAL, this remastered Blu-Ray looks sumptuous and instantly becomes the preferred way to view the film if you've never seen it before to fully enjoy the care applied to its creation. Similarly, both Japanese and English audio tracks are superb and do their bit to breathe further life into the film with strong performances throughout.

Given its place in Hayao Miyazaki's filmography, and the talk and rumours of a sequel that now seem to be dashed (in feature-length), it feels like we should have a lot to say about Porco Rosso, but for once we find ourselves without all that much to say beyond: Porco Rosso is a very, very good movie. This is very much an entertaining film in the purest sense of the word, and feels like a lovingly crafted and well-paced piece that can sit amongst Studio Ghibli's best. If sitting amongst said studio's best films isn't a compliment, then I don't know what is.

9
A simple but joyful movie that has a rightful place as another Studio Ghibli classic, given a new lease of life via this glorious HD transfer.
COMMENT AND DISCUSS
blog comments powered by Disqus