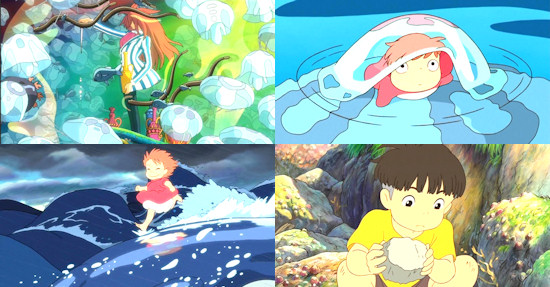 Whether it's My Neighbour Totoro or Spirited Away that caught your eye, I would imagine that neither Studio Ghibli nor the work of Hayao Miyazaki require much introduction, coming as they have the closest any Japanese animation studio has managed to mainstream success outside of their native land, with the aforementioned Spirited Away in particular catching the eye of both critics and movie-goers alike.  This brings us then to the latest work which reunites Hayao Miyazaki for his ninth film with Studio Ghibli - Ponyo (or Ponyo on the Cliff by the Sea to stick to its full title), a movie purportedly inspired by Hans Christian Andersen's famous story The Little Mermaid.

Despite that apparent inspiration, don't go expecting singing crabs or anything quite so Disney-esque from this film.  Instead, we're treated to a breathtakingly vibrant, colourful and imaginative opening scene involving a rather odd-looking fellow dabbling with this colourful sea underwater while stood upon a submarine and an escaping, unknown sea creature who leaves its massed offspring behind to escape on a journey alone across the vast ocean.  After an unfortunate mishap involving a boat trawling for garbage along the sea bed, this creature finds itself washed up on the shore next to a little cliff-side house - A home which belongs to Lisa, the wife of a seaman, and her son Sosuke.  It's Sosuke who discovers this odd yet cute little sea creature, keeping her safe in a bucket of water and naming her Ponyo.

Of course, Ponyo's escape from her natural home doesn't go unnoticed for long, which soon leads her father to give chase, eventually snatching Ponyo back from Sosuke; but not before Ponyo has tasted both human blood and, perhaps more importantly, the warmth of their love and kindness thanks to Sosuke's actions.  Despite her father's best endeavours and intentions, Ponyo swears to return to Sosuke's side and soon makes good on her second escape from relative captivity.  This time however, her previous interactions with Sosuke combined with another mishap aboard her father's submarine gives both herself and the entire ocean powers that are beyond the human imagination - Indeed, they are powers that could threaten humanity itself; a threat that Ponyo is oblivious to in her hunt for Sosuke.

With Ponyo and Sosuke re-united, and the former now taking on the appearance of a little girl thanks to her contact with human blood, the rest of the film is left with Sosuke and Ponyo searching for Lisa in the aftermath of the floods and storms which swept the area - A search which also doubles as a test for this duo, in particular Sosuke, and whether he can accept his new-found friend no matter what her form might take.

Before even talking about the story, you really can't help but discuss Ponyo in terms of its animation first and foremost - In a word, it's sumptuous.  From the very first scene which sets the colourful and detailed tone of the film visually the entire movie from beginning to end is an absolute treat, with plenty of fluid animation to bring those gorgeous backdrops and characters to life, but without ever becoming reliant on computer graphics technology and losing its hand-drawn beauty.  In an era where CG is now so common-place in anime, it ironically leaves Ponyo feeling genuinely fresh visually despite its "old-fashioned" approach, making it a stand-out example of the traditional animator's art form.

This visual tour de force is backed up by a story which certainly isn't one of Miyazaki's best, but still succeeds in charming and entertaining from beginning to end in its own quirky and fun way.  There's something genuinely delightful about the innocence of the whole thing, from the child-like acceptance of all the weird goings-on exhibited by Sosuke which ties directly into the latter part of Ponyo's story, through to adult characters like his mother and the old woman at the retirement home she works at, most of whom also happily going along with whatever is presented to them without question even when they profess to not understanding it.  Even the sense of threat and danger served up by the film is never really given a full voice, preferring instead simply to focus on the joys of life, and more specifically Ponyo and Sosuke's friendship and sense of adventure.

This vein of innocence running throughout certainly robs Ponyo of some of the more well-rounded emotions and relations to the human experience of the likes of Spirited Away and Totoro, but equally I'm not sure that's necessarily important in this case - Ponyo is a family film that has clearly been created as a thing of beauty and joy rather than a platform for moral or philosophical lessons, and on that front it's an absolute success.  This movie might not be one of Hayao Miyazaki's greatest, but it's aesthetic magnificence coupled with great voice acting on both the Japanese and English soundtracks still makes Ponyo a film that will leave you smiling for the entirety of its running time as it draws you into its youthful innocence and leaves you with a warm, fuzzy feeling that really can't be matched.

The Blu-Ray edition of Ponyo is simply packed to the rafters with extras, from interviews with Hayao Miyazaki and the Japanese voice cast through to storyboards, trailers and of course both English and Japanese audio tracks with English subtitles.

8
It isn't one of Hayao Miyazaki's most memorable works, but that doesn't stop Ponyo from being a beautiful and delightful family film.
COMMENT AND DISCUSS
blog comments powered by Disqus