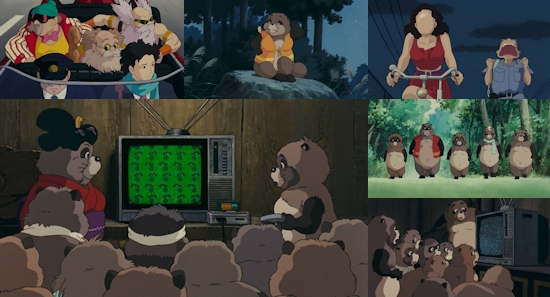 There aren't many films in Studio Ghibli's catalogue of theatrical releases that could be considered as overlooked or otherwise underappreciated, but if any film is perhaps deserving of those monikers it would be Pom Poko. Directed by Isao Takahata and released in 1994, this was the one theatrical Ghibli film that even I hadn't yet watched - thankfully, STUDIOCANAL's continuing programme of rereleasing all of their Studio Ghibli works on Blu-Ray means that I can finally rectify this via the UK's DoublePlay release of the film.

Starting out in the late 1960s, Pom Poko sees Japan in the thrall of massive urban and suburban development to house the growth in its populace and economy - a celebrated beginning of the successful decades to follow in economic terms perhaps, but bad news for the wildlife in the affected areas. More specifically, our attention is turned to a group of tanuki (Japanese raccoon dogs) who find themselves displaced by this growing urban sprawl - after fighting amongst themselves for the remaining territory, two previously disparate groups of tanuki unite with a single goal in mind, that being to win back their lost turf by using any means necessary to keep those pesky humans away.

If this seems like a tall order, even for talking, anthropomorphised racoons, then you'd be reckoning without one rather impressive feat of which tanuki are capable - their ability to transform, with sufficient training, into absolutely anything they wish. It's this ability which serves as the central premise for the rest of the film, as the tanuki train and then make full use of this ability to transform to attack, scare or otherwise hoodwink humans into leaving their patch and abandoning their construction plans. As the efforts of the tanuki escalate, so it becomes clear that humans are not so easily scared into submission when taken as a whole - can some far-away tanuki heralded as masters of transformation give them the final push that they need, or is it time for the group to consider other tactics?

The first thing that stands out about Pom Poko is that its humour and sensibilities are just that little bit more "adult" than Studio Ghibli's more typical output - what other movie in their output would see numerous jokes revolving around testicles? There's also a certain matter-of-factness about some of its subject matter - in the course of its "raccoon war" there are fatalities on both sides, none of which are dwelled on or depicted in grisly detail but there's an inherent assumption within the film that you won't be shocked or upset by the prospect of death. This slightly grittier take on life - be it animal or human - feels quite refreshing when offset against your expectations when sitting down to watch a Studio Ghibli film, and although this is no Grave of the Fireflies it adds a little more needle to its comedy and makes the machinations of the tanuki as they wage war against... well, you and I effectively, enormous fun to watch.

What is a little more typical of the studio's output is Pom Poko's environmental message - a reminder that the growth in human populace necessitates cutting into the homes of other wildlife and that this isn't something that should be taken lightly, complete with a closing message that perhaps accepting a requirement to live alongside nature is the only way forward. The message is obvious but it never becomes sanctimonious, and the fact that it leaves you cheering on the tanuki as they wreak havoc against their human enemy is cheekily subversive enough to work in delivering that message in its own right without proselytising.

Our only real criticism of the film is that it runs a little long - there's a solid ninety minutes of comedy and content here, but with almost a two-hour running time aspects of the film feel a little needlessly stretched where they could have felt a little more punchy if compressed, which leaves the film feeling a little flabby towards the end of its second act and beginning of the third. The film never becomes a bore, but it does run out of steam somewhat at this juncture.

As you'd expected from any Studio Ghibli film, Pom Poko enjoys a high level of animation - perhaps not the studio's best, but still more than up to the task of displaying its subject matter with aplomb. The only jarring element of the film's visual style is its cast of tanuki melting into an odd, blobby superdeformed look in certain situations, which somehow looks out of place with the rest of the movie and is the one less satisfying element of what is otherwise a good-looking film. Of course, this new Blu-Ray treatment of the film is top-notch and looks great throughout in terms of both fidelity and colour to ensure a superb viewing experience. The film's English dub may not be the most prominent in the Ghibli catalogue but it does its job well enough, if not to the extent of the original Japanese performances.

Whether you've missed out on this film before or want to check it out again in High Definition, Pom Poko is most definitely worth seeking out. Just because it isn't one of the most famous titles in the Studio Ghibli catalogue doesn't mean it's a failure - far from it in fact, and it undoubtedly deserves to be watch on account of its impish and eminently entertaining sense of humour which proves to be a whole lot of fun.

English and Japanese stereo with English subtitles.  Extras consist of storyboards and trailers.

8
It runs for a little longer than it perhaps should, but this is otherwise another Studio Ghibli great; a wholly entertaining film with an enjoyable vein of humour which runs through it.
COMMENT AND DISCUSS
blog comments powered by Disqus