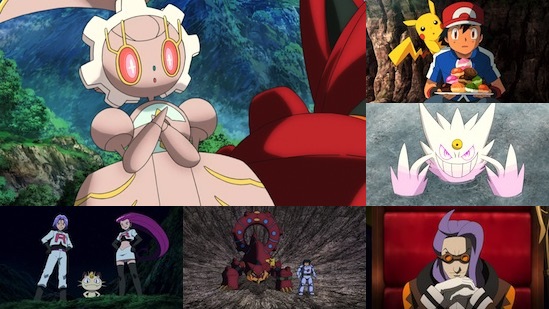 Pokemon the Movie: Volcanion and the Mechanical Marvel

While UK fans may still be eagerly awaiting full-season releases of the series itself, Manga Entertainment’s acquisition of the Pokémon license in terms of movies at least means a sure and steady flow of the franchise’s annual film offerings. Volcanion and the Mechanical Marvel is the 19th entry into the series, and the last of the movies to take place during the Pokémon XY portion of the anime. As such not only is it one last hurrah for many of the characters and mechanics introduced in the sixth generation of Pokémon games, but also marks the debut of the first Mythical Pokémon from Sun & Moon – Magearna, the franchise’s first truly artificial monster.

This movie sees Ash, Serena, Bonnie and Clemont meet the mythical Pokémon Volcanion when an accident leads to Ash and Volcanion becoming stuck together. Unwilling to trust humans, Volcanion drags Ash along on his mission to rescue Magearna – an artificial Pokémon that was captured by the Azoth Kingdom, a land of arcane science where Megearna was born 500 years ago.

As the group help to rescue Magearna and teach Volcanion that not all humans are untrustworthy, they uncover a sinister plot by the Kingdom’s evil councillor Alva to steal Magearna’s core – an ancient artefact known as the Soul Heart. Commanding an army of mega-evolved Pokémon, Alva and his forces launch an attack on the two mythical Pokémon’s home to take the Soul Heart and awaken a power buried within the Azoth Kingdom.

Pokémon movies have never had particularly complex plots. The obligatory inclusion of a Mythical Pokémon (i.e. the ones Nintendo only give out via special events) means they usually follow the predictable pattern of the Pokémon going rogue, a villain trying to harness their power or sometimes a mixture of the two. Volcanion and the Mechanical Marvel isn’t really any different in this regard, but the setting and characters do an excellent job of setting it apart from some of the more forgettable instalments. Even just as a concept Magearna is the most fascinating Pokémon has been in a long time, and it’s a shame the film doesn’t have more time to dedicate to the science behind its origins. But alas, it’s a kids’ film so there isn’t much more to it than “here is a Pokémon created by arcane science 500 years ago” and a few flashbacks. Regardless of this the kind-hearted, clumsy Magearna completely steals the show, and it’s genuinely heartbreaking to watch it have its heart literally ripped out as the film gears up to its climax. It’s a Pokémon film so a happy ending is all but assured, but it’s still pretty tough going for a moment or two.

The film’s basic plot also means some rather basic character types are included, such as the naïve young prince and his “quite obviously evil just from the beard” advisor. However in a franchise that isn’t exactly brimming with deep characters none of the newcomers here are particularly offensive or unlikeable. Meanwhile Volcanion is a fairly average “animal that doesn’t trust humans” character but is nicely expanded on through a good back story, dialogue and a relationship that’s about as sweet as love between a giant steam-powered dinosaur and a lolita-Pokéball robot can get.

As far as the regular series cast goes to shouldn’t be any surprise to hear that the film is again of course completely the Ash show, but unlike other films at least here his travelling companions and their Pokémon are able to get in on some of the action scenes. Even Team Rocket, who seem to spend most Pokémon movies skulking around in the background, actively play a part in the proceedings.

Volcanion and Magearna aren’t the only draw though, with the film also including several other cameos and gimmicks from Pokémon XY to keep things exciting. From shiny Pokémon to nearly every Mega Evolution that appears in the games, Volcanion and the Mechanical Marvel really feels like a celebration of everything X and Y introduced to Pokémon before they’re cast aside in favour of Sun and Moon’s features. Whereas Hoopa and the Clash of Ages’ attempt at throwing in as much as it could at once led to a whimper rather than a bang, here things play out more naturally and lead to some fantastic battle sequences as well as some cool and genuinely surprising moments.

The Pokémon XY series has been hailed as being the best the show has ever looked (leading to outcry when Sun & Moon introduced a new stylised aesthetic), and it only takes one look at this film to see why. The animation is smooth, the colours are vibrant and somehow even the over-abundant CGI manages to look good as Pokémon fully embraces steampunk-inspired visuals for the first time. The Azoth Kingdom is covered in Victorian architecture, spinning cogs, moving walkways and all sorts of other retro paraphernalia, contrasting brilliantly with the luscious green fields Volcanion and Magearna call home. While personally I’m in love with the refreshing new look of the Sun & Moon anime, with films like this I can understand why some fans lament the loss of these visuals.

Due to the Pokémon Company’s stranglehold on keeping the show a one-language franchise in the west this release only features the English dub of the film, which also incorporates newly recorded opening and ending themes. As was the case with the first three movie releases and Hoopa and the Clash of Ages this is likely something that was completely out of Manga Entertainment’s hands, but another bare-bones release will just make buyers long for the good old days of cinema releases and the bonus Pikachu shorts being included all the more.

Volcanion and the Mechanical Marvel doesn’t ever break the mould set by the previous eighteen Pokémon movies, but it does fit it pretty perfectly. With enjoyable characters, great visuals and plenty of spectacle it ticks all the boxes of a long-running anime franchise movie should. Sadly as the next film is set to be an alternate retelling of how Ash originally met Pikachu, Volcanion and the Mechanical Marvel will inevitably be overshadowed by the almighty power of childhood nostalgia, but before that rolls around Pokémon fans should definitely check this out to remind themselves just what made the X&Y games and anime so great.

7
Pokémon goes steampunk in one of the franchise’s better movie offerings in recent years.
COMMENT AND DISCUSS
blog comments powered by Disqus