UK Anime Network - Anime - Pokemon the Movie: Hoopa and the Clash of Ages 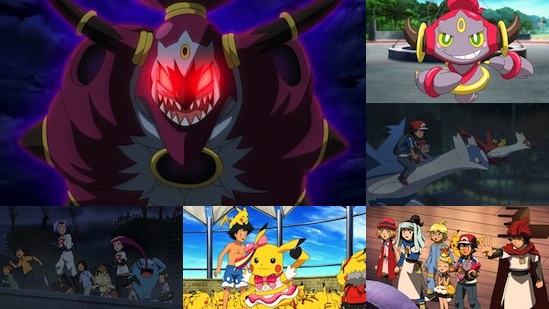 Pokemon the Movie: Hoopa and the Clash of Ages

Despite its overwhelming popularity, the Pokemon anime series has never had the best of luck in the UK when it comes to releases. Despite having nearly a thousand episodes to its name, we're one of the few English-speaking territories to not receive the series in a form other than single disc releases containing a handful of episodes. One aspect that’s always remained fairly consistent though are the Pokemon movies, and for the 18th instalment the franchise has found a new home with Manga Entertainment. Hoopa and the Clash of Ages is the second film to take place in the Pokemon XY portion of the series, incorporating elements from Pokemon X and Y games as well as Omega Ruby and Alpha Sapphire.

Over a hundred years ago the Pokemon Hoopa was imprisoned when its reckless actions in proving how strong it was destroyed an entire town. In the present day, Ash and his current travelling companions Serena, Clemont and Bonnie are enjoying a break at a poolside Pokemon Centre when a mysterious hand starts playing pranks on them through a dimensional portal. This hand is revealed to belong to a much smaller Hoopa, raised by brother and sister Meray and Baraz. It was their great-grandfather that first sealed Hoopa’s overwhelming power (it’s ‘Unbound Forme’), trapping it within a Prison Bottle.

However when Meray and Baraz attempt to restore Hoopa’s strength, things start to go wrong. The darkness sealed inside of the bottle hasn’t taken too kindly to its 100 year imprisonment – vowing to destroy its other half. It’s a race against time for Ash and company to defeat Hoopa Unbound and save Hoopa, and a battle that will call upon legendary monsters from across the Pokemon world.

The fact that Mythical Pokemon (ones that are solely reserved for special distribution events game-wise) are mostly saved for the film series always ensures that these releases feel like movies and not just elongated episodes of the series, but in terms of their complexity its only really their running time that makes them stand out. As such Hoopa and the Clash of Ages isn’t an especially difficult film to understand, but the dialogue seems to think otherwise as the majority of it seems overly expository. Rather than let the viewers realise something for themselves everything is stated as obviously as it can be, sometimes multiple times just to hammer the point home. This can lead to some rather clunky lines, dumbing down a film that never needed to have everything signposted. The more subtle elements of the story, such as Hoopa’s family ties or how Hoopa Unbound was more misunderstood than particularly evil, are far more engaging.

But there’s more than just Hoopa to sell this film, as the “Clash of Ages” tagline also refers to a number of returning legendary Pokemon from previous movies. These include Lugia, Latios, Latias, Groudon, Kyogre, Rayquaza, Dialga, Palkia, Giratina, Kyurem and more. The climax is a Legendary Pokemon royal rumble, with some standing on the side of Ash/Hoopa and the others under the control of Hoopa Unbound. In theory it sounds like every Pokemon fan’s dream, but by bringing so many legendary Pokemon together (most of which have carried films on their own in the past) it instead makes none of them feel particularly special. The fact that the characters barely bat an eyelid at such an event is also a little baffling, particularly when the Rayquaza that appears in the film is black as opposed to green. To see a “shiny” legendary Pokemon is a pretty big deal, and for no-one to even acknowledge this is frustrating to say the least.

Although the Pokemon films have always been preoccupied with the big events surrounding the video games, Hoopa and the Clash of Ages is especially crammed with cameos and references to notable parts of the recent games. Whether it’s the aforementioned shiny Rayquaza, Groundon and Kyogre’s Primal Reversion forms, Mega Evolution or the appearance of Omega Ruby/Alpha Sapphire’s Cosplay Pikachu, there’s a whole lot to take in outside of Hoopa himself. Elements like Cosplay Pikachu just come off as nice little cameos, but the rest are further examples of treating something special as a minor addition that barely seems worth mentioning.

In terms of visuals though Hoopa and the Clash of Ages is an absolute treat. Pokemon XY is already hailed as providing the franchise with a much needed boost aesthetically, and together with the larger movie budget the end product is truly a treat for the eyes. The movies often receive praise for their choice of locations and Hoopa is no exception, placing the genie-like Pokemon in an Arabian-inspired city. The character designs are sharp and the action sequences explosive, so even when the plot is faltering the visuals are there to pick up the slack.

Fans who hoped that Manga Entertainment’s acquisition of the Pokemon movie license might mean that they would be able to enjoy the series in its original language will also be disappointed to find that this release is dub-only, the Pokemon Company remaining insistent on marketing the franchise to English territories in one language only. If you’ve been out of the Pokemon anime game for a long time you’ll immediately notice that Ash, Jessie and James do not have the same voices they did when the series first started, changed when The Pokemon Company took over dubbing from 4Kids in 2006. However in those ten years Sarah Natochenny, Michele Knotz and Jimmy Zoppi have all settled into their roles nicely and made them their own. Equally there’s some great voice work from the characters unique to Pokemon XY and the movie itself, with only perhaps Hoopa’s childlike voice taking some getting used to.

Another downside to this release is that it’s extremely bare bones, lacking any sort of special features whatsoever. While Manga Entertainment aren’t the ones at fault for this, the knowledge that the film was originally released in Japan alongside a Pikachu short (entitled “Pikachu and the Pokemon Music Squad”) makes it all the more disappointing. The film’s Japanese DVD release also included a prequel episode to the film, which again is completely absent on this disc. Previous movie releases have rarely overlooked these shorts, and while the film itself is able to stand alone without them it does mean the release feels somewhat incomplete.

Despite being the lowest grossing Pokemon movie so far Hoopa and the Clash of Ages is a reasonably solid entry into the long-running series, making up for its rather basic plot with great animation and plenty of spectacle. What really lets things down is just how basic this release is – with no extras it feels more marketed solely towards children than fans/collectors, as generally something that feels below the standard of what something as big as Pokemon should be aiming for.

6
An enjoyable adventure, but not quite the “Clash of Ages” it promises.
COMMENT AND DISCUSS
blog comments powered by Disqus