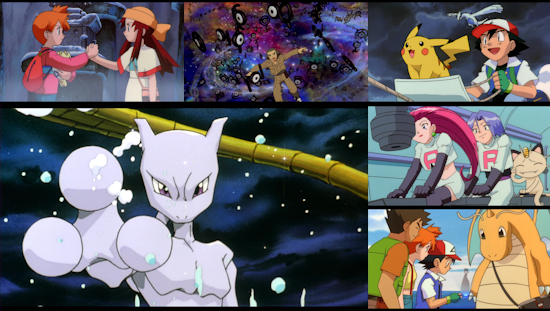 Even as someone who has never really engaged with Pokémon beside from the occasional casual foray here and there, even I can remember the juggernaut of promotion and breathless coverage of the first theatrical Pokémon movie upon its arrival in the UK. It was clearly a big deal at the peak of the franchise's arrival into the west, and it was hard to move for news pieces of articles discussing the phenomena.

Yet, here we are in 2016, a year which saw Pokémon reach new heights courtesy of smartphone game Pokémon GO, which perhaps provides a fortuitous occasion for Manga Entertainment to dip their toe into its world by releasing its various movie iterations of home video. We've already seen the latest film, Hoopa and the Clash of Ages, hit the UK, but now we delve back in time to collect the first three Pokémon movies in a single Blu-ray Steelbook collection. Clearly, there's a nostalgia trip to be had for Pokémon fans who were there to bear witness to the late 20th century hype as they can relive the experience in High Definition, but how do these movies hold up when shorn of those fond memories?

In terms of premise alone, it is perhaps the first film that stands out the most from this original trilogy, bringing us the story of a legendary Pokémon cloned and improved by scientists to create the nigh-on invincible Mewtwo. With an intellect to match his impressive psychic powers, Mewtwo soon realises that humanity wants only to enslave and manipulate him, and his anger sets him down the road to destroying humans and Pokémon alike.

Of course, to do this, Mewtwo simply obliterates the planet. No, wait, sorry... to do this, Mewtwo invites the best and brightest Pokémon trainers to take him on for no particular reason other than to provide a recognisable narrative through line for viewers. In fairness, the premise works reasonably well - there's some good old-fashioned Pokémon battling, a sense of peril that the film toys with smartly towards the end of the film in particular, and a happy ending to close things out in an admittedly lazy fashion.

In comparison, Pokémon the Movie 2000 is far less interesting in terms of its story - a legendary Pokémon collector endangers the planet in his quest to find some particularly unusual Pokémon that are themselves the key to unlock a mysterious treasure - but makes up for this with some great design work topped by fantastically dynamic visuals that are a notable cut above the other two films bundled here. Cameras sweep over vistas and around characters to add some real vibrancy to the movie's presentation, and the results are frequently eye-catching even if the story itself is more pedestrian.

Anyhow, the final film steers clear of these issues, instead focusing on a girl who loses her father as he searches for a legendary Pokémon known as Unown, who also propels her into a world of her own fantasy in an attempt to cater to her wishes in the absence of her parents. Of course, it's up to Ash and company to save the day, in what is perhaps the most emotionally resonant of the three films to add a little sheen to what is otherwise another run-of-the mill film which is arguably the weakest of the trio included here.

All three films benefit from an HD transfer rather than a simple upscale, and although we could nit-pick around aspects of this transfer - some scenes are still a little dirty or noisy and could have done with a clean-up, while all three films look a little "soft" - they definitely look good enough to feel like this Blu-ray release may be a beneficial upgrade to anyone who previously owned them on DVD. Then again, if you make the move to this release you'll find a movie trilogy completely shorn of additional materials - the Steelbook presentation is nice, certainly, but there are no additional Pikachu shorts here, no 5.1 audio presentation and no Japanese language track or subtitles. For a release with such an appealing outer presentation, the lack of content within is profoundly disappointing - it feels like this should have been the definitive release of these films, but it's ultimately a long way from that, and even upscaled extras from previous releases would have been better than nothing.

Still, as a piece of nostalgia - or a chance for new Pokémon fans who weren't around at the time to relive these adventures - this movie triple-pack certainly serves its purpose and looks nice on your shelf to boot. The films themselves are all entertaining enough, with their own positives and negatives that leaves us with a trio of fun but predictable movies that nonetheless contain everything that a younger fan in particular might want from them. This, then, is a solid release, but still one that represents a missed opportunity to create a must-have edition of these films - as it is, you'll still be left clinging to older editions of this material if you want the complete package of bonus shorts in particular that are missing here.

6
Three solid films that benefit from a Blu-ray presentation, but this release is missing shorts and audio options that would have made for a more compelling package.
COMMENT AND DISCUSS
blog comments powered by Disqus