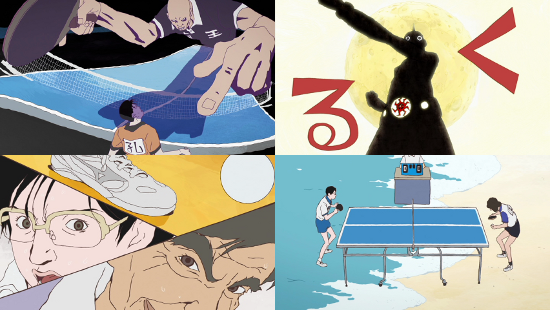 Smile and Peco, childhood friends, are a strange pair. Smile never does, and Peco spends his time eating junk food and has no time to listen to anyone but Smile. Both of them are pretty good at table tennis, outclassing the rest of their resentful backwater high-school team. The team’s coach, an eccentric old man who loves to splice random English words into his speech, takes notice and shoves the two of them into the regional high-school tournament. There, they come face to face with a colourful cast of other monstrous competitors who have dedicated their lives to ping pong. The experience changes both of them, forcing them to decide what to do with their talents, and their lives as a whole.

Despite the name, Ping Pong is barely a show about the sport itself. It casts a far wider, grander net depicting the intense human drama of a clutch of players caught up in the same regional tournament and how it effects their waking lives. The entirety of human emotion is on display and is examined to an electron level of detail across the cast, examining their motivations, expectations, relationship, demands, sacrifices, mistakes; every fibre of their being laid out before you. The series does all of this with masterful presentation (more on that later), and pitch perfect pacing and flow that drives every moment home and makes it resonant, penetrating and heartfelt. Extra characters and layers to the drama are laid on in carefully considered sequence, stoking the intensity of the series in a masterful flowing procession. Even on a repeat viewing, the impact is no less diminished and even takes on additional dimensions from having seen things play out once before. The show constantly asks powerful questions and lets the characters play out their own answers - one that continues throughout the show and I still think about even now is the question of “Is it sometimes better to lose?”

The cast themselves, the crux of all the drama, are fascinating, complex beasts that you can feel both the show and yourself unpacking throughout the whole run of the series. Not only the main pair of characters but all other primary characters get their own time in the sun, going through their own strife and soul-searching. The ping pong games themselves are the crucible, testing everything that the cast have done up until that point and their very personalities. Lingo for shot and paddle types is liberally sprinkled throughout the show but you do not need to know any of it to enjoy what is on display and the show damn well knows that, as it never bothers to pull you aside and dump exposition on you about the nitty gritty of the sport itself. Instead, it limits itself to a general explanation about how things relate to the characters and their personal growth, which is the critically important thing being examined. Not that the matches aren't thrilling - the sheer unpredictability and intensity of the matches make them an utter treat to watch.

As hinted at earlier, the presentation of Ping Pongis magnificent. You expect a certain level of visual panache when the director attached to a project is Masaaki Yuasa, but this show outdoes itself in this regard and has a number of amazing individual elements that combine into something truly special, and which need a little breaking down. You have the backgrounds which are captured in a painterly, watercolour style which gives everything a feeling of both detail and texture, breathing life into the scene while at the same time looking amazing. Something that unites both these and the characters is that all of the lines look irregular, giving everything an intense hand-drawn look which gives it an additional heft and feeling of life. The characters are presented in flat colours with stark outlines, giving them intense and immediate feeling of expression. This is further re-enforced by how dynamic they look, as if they were intensely rotoscoped, constantly moving with a high frame rate. The result is somewhat hard to explain - they are emotionally communicative while static and, especially while in motion, the stark shifts in each frame giving them powerful expressiveness. It is also the kind of style that can end up looking terrible when seen in screenshots as this strips a lot of that expression out.

The final element that ties this all together is how the show uses its available screen real estate - it often cuts the screen into multiple panels and plays with the multiple resulting spaces, as if you were reading a page of manga that is animating in front of you. While this would be easy to relegate to being nothing more than a gimmick, Ping Pong uses this technique to great effect, providing another dimension to its presentation - showing you multiple angles on the same scene in different view ports, providing a crawl of small panels that pop into life before action transfers to another one; or characters trapped in one pane clawing away at their limited space and taking over the whole image. In each usage this feels perfectly pitched and a fully thought out inclusion to enhance the show’s overall presentation. All this taken together gives Ping Pong an amazing dynamism and confidence that drags you into the show.

For all this praise, the series is admittedly not uniformly gorgeous - for two episodes in the middle of the series (after the first tournament) the level of animation takes a mild dip and looks like a stark low budget variant of itself, but thankfully rallies quickly once this interlude starts to give way to the ramping up into the second half.

The soundscape in Ping Pong is a strange but fitting beast. Background music is used sparsely but always has a massive impact when it does appear, especially with some of its recurring themes and those that are tied in with the most impactful emotional moments. It is a marriage of great music used damn well, including a perfectly timed use of a children’s nursery rhyme that causes the hair on the back of your neck to immediately stand to attention - you didn’t know that this was what the scene in question needed, but it most certainly is and it makes a colossal impact. The voice cast are no slouches either, putting in an amazing performance as the show's collection of misfits, including no small amount of humming.

This release also comes with an English dub, which is of a higher standard than average, and even goes the extra mile by keeping Chinese character Kong Wenge’s lines in Chinese and subtitling them where needed using a new voice actor who can also record his infrequent English lines. One issue is that the voices are somewhat quiet on the subtitle track, and the already softly-spoken Smile is almost inaudible on the dub track, which more than once caused me to jack the volume on my TV way up in order to hear him. It’s a shame as it is a good performance, just too quiet! Another thing I wanted to point out is that the Blu-ray menus are very nice - minimalist, accessible and stylish at the same time. The subtitles on this release are fine outside of a single line halfway through that refused to display for some reason.

A last note about the release is that to call the release a “Collector’s Edition” feels a bit of a stretch, as the “collector” element of the release is thicker packaging and four art cards - that’s yer lot. Sure, it looks nice on the shelf and feels reassuringly sturdy in the hand, but it would be nice if there was something a little more special included.

I honestly can not heap enough praise onto Ping Pong - is is a magnificent tale of human emotion and personal drama, perfectly pitched and presented, and it barely wastes a second of its compact eleven episode runtime. It enthralled me for the whole run, and still maintains its grip on me even now, demanding another viewing. You should watch Ping Pong.

Set comprises the complete series on both DVD and Blu-ray in both English 5.1 and Japanese 2.0 audio with English subtitles.

On-disc extras include clean opening and ending credits, US voice cast commentary on episodes 1 and 11, and original ad spots from the broadcast and box set release.

10
A work of undeniable power, Ping Pong is one of the best series of the last decade.
COMMENT AND DISCUSS
blog comments powered by Disqus