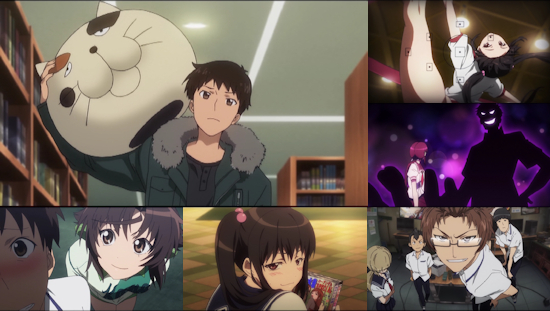 Kazuya Maeda is, like many a teenage boy, a lad with something of a short attention span who finds himself constantly flitting from one hobby to the next. All of this seems set to change however when his father hands down a digital SLR camera to his son, thus introducing him to the wonders of photography and giving him the focus (with every pun intended) required to pursue a new interest that will stick where so many others have faltered.

However, before he truly engages with his hobby, Kazuya must make a choice between his high school's two rival photography clubs - one which espouses capturing natural beauty in the form of flowers and foliage, while the other is interested in natural beauty of a... different bent, shall we say. Press-ganged into joining the seedier of the two clubs, Kazuya is expected to use his easy-going nature and existing relationships with some of the school's most notable beauties to capture the kind of candid shots that his new club mates are constantly on the look-out for.

To be quite honest here, the whole photography angle of Photo Kano isn't all that important aside from serving as an excuse to introduce our protagonist to a bevy of girls for him to romance, and also providing some (surprisingly restrained) opportunities to leer at said girls as they volunteer for an impromptu photo shoot at some point or other. As fan service goes, the series is really rather tame most of the time, with a modicum of panty shots and implied nudity proving as notable as it gets beyond the lower level constant male gaze that you might come to expect of this kind of series.

The series also eschews simply choosing one "route" for Kazuya to follow, instead providing a handful of episodes to build its setting and cast before switching to give each girl her own single standalone episode arc where her relationship with our lead progresses to full-blown love. This approach is a decidedly mixed bag - as Kazuya already has a longstanding friendship with some of the girls before the series even begins it's easy enough to develop that friendship into something more over a single episode, whereas when a relationship starts from virtually zero as it does in other cases there's simply too much character development to squeeze into a single episode and the result is an overly rushed sprint to the inevitable conclusion of matters. Oh, and yes, one of these single episode relationship arcs does revolve around Kazuya and his little sister and hits all of the beats you might expect, in case you were wondering. This one-shot approach to each character is also - as per other shows which have played with similar mechanisms - heavily dependent upon how much you like a given character, although at least with only one episode per girl you won't be lumbered watching Kazuya fawn over a character you don't like for an eternity.

If all of this sounds like a pretty run-of-the-mill romantic comedy-drama series with a side of fan service, then you'd be right. But! But...

There's something about the presentation of Photo Kano that threatens (although never quite succeeds) to elevate the series beyond its mediocre trappings. The series is directed by Akitoshi Yokoyama for production studio Madhouse, a man with plenty of interesting credits to his name including episode direction on The Tatami Galaxy and direction on one of Studio Khara's Japan Animator Expo shorts. Rather than simply phone in this adaptation of a forgettable PSP game, Yokoyama has instead filled the series with plenty of quirks, tricks and visual flourishes that make for a surprisingly engaging visual experience - by leaning on the photography angle of the story as an excuse for interesting frame compositions as well as some occasional dips into the outright surreal, watching Photo Kano is a far more entertaining proposition than it would otherwise be. Such is this pursuit of elevating the show to another plane that we're even treated to an in-series magical girl show created by none other than Masaaki Yuasa, although sadly its appearances are so fleeting that if you blink you'll miss them.

Admittedly, none of this turns Photo Kano into a must-watch series, but it does feel like a show that has been afforded some care in its craft in a way that this kind of effort rarely exhibits - alongside its visuals, the show also boasts a solid soundtrack and voice performances, although there's no English dub here to compare to, subtitle-only release that this is. We only got to check the show out on DVD for review but it looked decent enough, although you'll probably get some benefit from checking it out on Blu-ray instead given its attempts to catch your eye with its presentation.

If you've found yourself bemoaning the fact that other, similar romance-led series like Amagami SS never made it to the UK, then Photo Kano might just be the series to fill that hole for you - it has a likeable cast of characters, provides some generic but solid love stories, and boasts a carefully spread out smattering of fan service that never feels gratuitous (thanks in part to its premise). Add the visual flourishes we mentioned and a clear attempt to make something more than "just another abjectly mediocre anime" and there is something to be appreciated here - it may not be enough to make you part with your cash or pick up a series that you might otherwise have ignored, but Photo Kano is certainly a marginally more interesting series than I was initially prepared to give it credit for.

6
A run-of-the-mill romantic comedy-drama, elevated slightly by some moments of eye-catching direction and presentation.
COMMENT AND DISCUSS
blog comments powered by Disqus