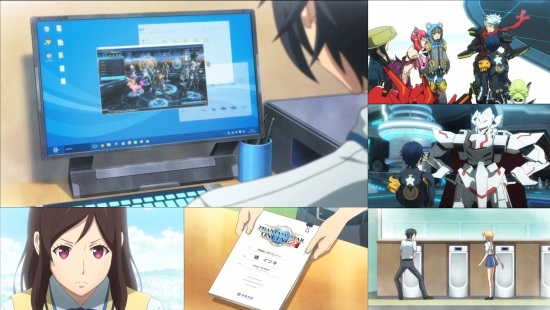 In recent years there's been a trend within anime where a series will have its characters stuck in an MMORPG in some form or another. Instead,Phantasy Star Online 2 (PSO2) has the actual game appear in the show itself as something the characters play but thankfully are not trapped in. The basic premise of the show is that all-round average guy Itsuki Tachibana is drafted into his school's student council to fill the recently vacated role of student council vice president. Due to his reputation for being able to handle any odd job and integrate himself into any club rather easily he is chosen for the job to help out in various tasks the student council must perform. Alongside this, he also gets a special request from the student council to play Phantasy Star Online 2 during his free time at night and report his progress and experiences. Itsuki is given this task with the condition that his grades will not be affected by playing the game, to thus show that playing a game can still be enjoyed as part of a normal high school student's curriculum.

From the get-go Phantasy Star Online 2 paints itself as one big advert for the game itself - the story takes place in a world where it's the most popular MMORPG, such that it comes pre-installed on the most widely used Operating System within the series and being the favourite pastime at the school the show takes place in. This "anime as advert" existence is further pointed to in the main point of conflict that starts the series, that being those reports need to be made in order to show the students can still play the game and keep their grade point averages up. With this in mind the series takes a character who has never played the game before and shows their progression from humble beginner to avid player as a way to show how easy the game is to get into.

All of this makes the series a point of contention, since at the time of this show airing, there is still no official western release of the game itself on any platform meaning that those wanting to play the game will need to track down a way to play a Japanese copy and login to a Japanese server. While this is a small nitpick against the anime specifically, one cannot help but laugh when the characters talk about the worldwide success of the game and how it has a player base and fandom spanning the entire world. That aside though. If you leave that to one side and don't really care much for Phantasy Star Online 2 as a game in itself then that small annoyance goes away, as the series mostly talks about MMORPGs in really broad terms. This is due to Itsuki, the lead character, being a complete beginner not only with PSO2 but with the genre as a whole. As Itsuki enters into the world of MMORPGs he learns more about terms and aspects of playing the games, ranging from creating parties and going on raids to not having your personal information leaked online and attending fan events. These aspects usually take up the vast amount of each episode, in turn making the series feel like the complete idiot's guide to MMORPGs at some point.

While this aspect is the general crux of the show, it's slightly annoying that the actual MMORPG side of things don't really take up much screen time. In most cases the viewer is only given about 5-10 minutes worth of content that takes place in the game itself, most of which is either standing around talking in the hub world that the players first enter upon logging in or fighting a random encounter showing the aspects of working in a party. For the most part the show is a high school comedy, albeit one where all anyone ever talks about is PSO2. The series tends to focus on this high school aspect more, which really begs the question “Would the series still be the same thing if they chose any other game to focus on rather than PSO2?” From the first three episodes it would seem to be the case, but after episode four's fan event providing the main focus there seems to be a promise to integrate more aspects of what makes PSO2 unique in the market of MMORPGs.

All of this makes Phantasy Star Online 2 The Animation a rather odd series to rate. On the one hand it has a very generic high school life aspect that doesn't really set itself apart from any other series that does the same. It acts as a tutorial and guide into RPGs but this is all information that many people will already know and won't get any satisfaction from. The biggest elephant in the room though is that the series at times feels like an advert for a game that is not available to buy legally for most of the audience. That being said however, the show itself does provide some entertainment value and it's nice to see a show that features an MMO without people being trapped in it for once. Whether the show stays as this light-hearted look at MMO's trying to ease in a new player base or turns into something more serious remains to be seen.

You can currently watch Phantasy Star Online 2 The Animation in streaming form on Crunchyroll.

6
More of a tutorial to MMOs than an actual story, but still somewhat entertaining for what it is.
COMMENT AND DISCUSS
blog comments powered by Disqus