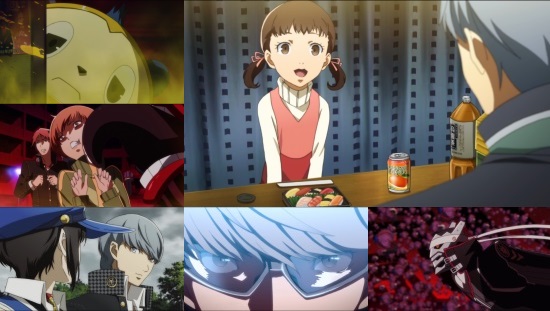 Since its rather humble beginnings as a PlayStation 2 game released in 2008 at the end of the console's lifespan, Persona 4 has grown into a massive franchise. Since then, the original game has enjoyed an anime adaptation, two fighting game spin-off games, a music/rhythm spin-off game and a dungeon crawler 3DS game in the style of Etrian Odyssey. More importantly however is the addition of the enhanced PS Vita port known as Persona 4 Golden, and now this brand new anime adaptation taking this game as it's basis.

When news of Persona 4 the Golden Animation broke, I was mystified by the reasoning behind this new anime's existence. While some may argue over the minor details and presentation of the original Persona 4 anime, it still did the job of adapting the source material well enough to deliver a competent and coherent display of the game's story and charm. As quite the fan of the series I was cautiously optimistic about this new adaptation - Persona 4 Golden does have quite a lot of material to pull from in order to create a new adaptation that properly integrates into the narrative, but unfortunately Persona 4 the Golden Animation takes all the bonus content from the game, puts it on a plate and expects fans of the series to eat it up with huge grins on their faces.

The series presents this content with very little structure, offering up scenes and characters with no context or explanation as if it's expecting thes audience to know exactly what is happening. With this they have thrown virtually all plot and characterisation out the window to just present the series as an animated version of the game's new content. The first episode does show a slightly different version of the story's opening events, but with that takes all the serious aspects of the plot completely out of the equation. For newcomers this means the series is almost impossible to watch - new characters appear with no introduction and events happen without any set up other than the game's calendar system being used simply as a means to show when things take place.

Thus, Persona 4 the Golden Animation's main priority is to present itself as a comedy series aimed solely at fans of the franchise who played Persona 4 Golden or at the very least watched Persona 4 the Animation.  While there are some humourous moments, most miss the mark completely - this can make scenes feel like they are dragging on, since each of episode is largely tied to a specific event.  This, coupled with some terrible animation quality in places, gives to way to the series providing some unintentional laughs.  Another problem with Persona 4 the Golden Animation's presentation is it doesn't quite feel like it has earned the right to show these comedy scenes - while other entries in Persona 4 had plenty of such moments they meshed rather well with the supernatural elements and the murder mystery aspect of the show.  While the main plot of Persona 4 is rather dark and at times a bit grim, the light-hearted moments are there to break up the tension to remind you that the cast are ordinary high school students who just happen to be involved in a rather bizarre situation.  Here it has taken away all the mystery, intrigue and tension to provide nothing more than some lacklustre comedy.

Another addition to Persona 4 Golden that the anime has completely invested and devoted its cause to is the inclusion of a new character and events surrounding her. This character is Marie, a resident of the Velvet Room that the player can spend time with in order to show her the outside world. The main problem with Marie is that she is a completely boring and unnecessary character, and since Persona 4 the Golden Animation spends it's time split between showing new events and all of the events surrounding Marie, the enjoyment of it often simply boils down to the question “do you like Marie?” - if the answer is yes, then there are certainly plenty of scenes with her.  The series also tries to integrate her more into events and has a rather unhealthy obsession with providing her with far too much screen time and pulling focus away from the main cast.  This makes it hard to recommend Persona 4 the Golden Animation, since it spends most of its time focusing on one character whose inclusion in the first place seems rather clumsily handled and thrown in for the sake of having an extra Social Link to work on within the game.

Persona 4 the Golden Animation, then, is a bit of an oddity. One the one hand seeing its characters again and the added content animated can be fun for fans wanting simply that, but for most it becomes apparent how much of a cash-cow the series has become. With so much content being released centred around the Persona 4 universe, the whole series becomes rather overwhelming to keep up with. The added Persona 4 Golden content, while interesting as an addition to an already established game, just doesn't have enough weight and charm on it's own to justify an anime adaptation. In the end it makes Persona 4 the Golden Animation a rather pointless adaptation that only real die-hard fans who have not had enough Persona and Marie yet will be eating up.

You can currently watch Persona 4 the Golden Animation in streaming form on Crunchyroll and ANIMAX UK.

4
A pointless adaptation centred around an unnecessary character - only for the most die-hard of fans.
COMMENT AND DISCUSS
blog comments powered by Disqus