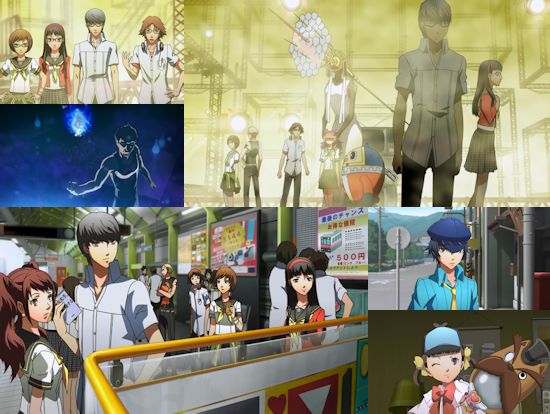 Having introduced us to the Velvet Room and plenty more besides in its first volume, we jump back into the world inside the TV and re-join the Midnight Channel for this second set of Persona 4 episodes on shiny silver discs.

There's little time for reflection as this second volume kicks off either, with popular idol Rise Kujikawa the latest to be kidnapped and thrown to the mercies of the Midnight Channel, with her "true self" offering up an... interesting spectacle to those watching. Of course, we know the score from here by this point - head off to Junes, leap into the world behind the TV and rescue the victim. It's another challenge made more difficult by the emergence of a little more about Teddie's background.

Any congratulations on a job well done are soon put on hold by news breaking of another murder - have our group of wannabe detectives been barking up the wrong tree the whole time? While it ultimately seems as though the culprit has exposed themselves and been apprehended, an uneasy feeling that the town's trials and tribulations are far from over persists...

Now that the series and its premise are well-established by the time we reach this second collection of episodes, Persona 4: The Animation really gets the opportunity to stretch its legs and enjoy itself. In terms of the main plot thread of the show this involves some pretty slick action scenes and compelling journeys into the television that make the most of the original game's more inventive elements while doing an impressive job of leveraging the source material's mechanics to its benefit.

It's this dedication to making the most of the game upon which the show is based that really shines out throughout these episodes - even away from its main story, the series revels in its opportunities to cover every aspect of the original work, often with tongue firmly jammed in cheek. This ensures that there's plenty of entertainment brought to the Persona 4 table even when we're watching Narukami taking up part-time jobs, going on school trips or talking to a fox, and the vein of humour that runs throughout the entire production is a joy to behold - impeccably timed and weighted, it's hard not to pick out at least one occasion where each episode made me laugh out loud.

The only area where Persona 4's anime adaptation continues to be changeable is when it comes to its animation quality - at times it can be impressively fluid and dynamic, but away from the action it continues to feel a little cheap. It's passable and never crosses into ruining the viewing experience, but there's no shortage of better looking anime series out there, even in HD. Beyond that, both English and Japanese voice casts do a great job of expressing the show's energy and (when required) drama, although the original Japanese cast does have the edge largely on account of Naoto's voice acting, which works much better in its native language somehow.

With a good video transfer and a couple of extras accompanying it, our only real complaint with our Blu-Ray review copy is the lack of in-episode sign subtitling across the disc - this is most repeatedly noticeable (as it was in volume one) during the eyecatch sequences which shows Narukami's stats as per the game, but in this second volume there are also a number of occasions where important (or at least interesting) on-screen information isn't given an English translation. It isn't disastrous, but it does tend to forcibly eject you from any immersion you have in the show's world in places.

This gripe aside, Persona 4 continues to be a hugely entertaining viewing experience - if you're familiar with the original game then you'll get a kick out of seeing every aspect of it squeezed into this adaptation in some shape or form, while newcomers won't feel left out thanks to some tightly-written scripts, great turns of humour and a main story thread which remains compelling. It's rare to find a series that gets away with steering away from its central premise for episodes at a time without languishing in mediocrity during those spells, and it speaks to Persona 4's quality that it can be equally engaging whether it's delving into its mysterious world or goofing around on a school trip.

8
A tightly paced and well-realised blend of drama and light-hearted humour means that Persona 4 continues to serve up entertainment aplenty.
COMMENT AND DISCUSS
blog comments powered by Disqus