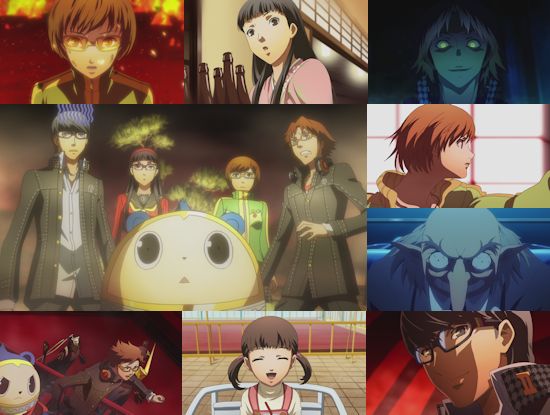 After a successful streaming release alongside its Japanese broadcast via Anime on Demand, the UK now gets to enjoy this adaptation of Atlus' epic JRPG Persona 4 in physical form, with Christmas Eve bringing us the first of three volumes which cover the series in the form of DVD/Blu-Ray combo packs.

As per the game upon which it is tightly based, we join the world of Persona 4 via Yu Narukami, a blank slate of a high school kid who finds himself transferring to the sleepy town of Yasoinaba while his parents work abroad for a year.  Left in the care of his uncle, detective Dojima, and her young daughter Nanako, it seems like there's nothing but a life of boredom in Narukami's near-future.  That is, until the murders start...

If the grisly death of a TV announcer currently in the news on account of a high-profile affair wasn't enough to set the town on edge, things get more personal as a second murder hits closer to home for Narukami and his new-found friends.  Could these deaths be anything to do with the "Velvet Room" of Narukami's dreams, or maybe even the strange "Midnight Channel", an occurrence which causes strange visions to appear if you tune into your TV at midnight on a rainy day?  As the links between these elements and the deaths in town become clearer, so the odd occurrences inside the TV prove to be the portal to an Alice in Wonderland-esque adventure for Narukami and his friends.

With nine episodes ensconced within this first volume, much of these early episodes of Persona 4 focus upon world-building, be it Narukami's home and school life as he settles in and makes new friends, or the world behind the Midnight Channel.  Thankfully, all of this is done at a decent clip (unlike the game upon which it is based) while still covering most of the aspects contained within the original work, including joining a sports club and other asides such as a camping trip.  It's to the show's credit that all of this is done with a well-executed touch of humour, occasionally using Narukami's "blank slate" status from the game as the crux of its jokes to great effect - watching him sent flying, stony-faced, after making an inappropriate remark is one of the funniest things I've seen this year.

Away from this the main goal of the series at this point is, of course, to build up its mystery and the dilemma facing our growing ragtag bunch of would-be detectives as they try to get to the bottom of the Midnight Channel and what ails the town.  Again, this is dealt with swiftly but expertly, managing to balance out the repetitive nature of having its characters confront things with a speedy (but never overly so) resolution to each arc and enough visual panache in its action and settings to ensure that the whole experience is engaging and occasionally hilarious.

Away from the dungeon-diving action element of the show, Persona 4 most certainly isn't the best-looking anime you've ever seen by a long stretch, but its visuals are true to the source material (right down to the odd hue of character's faces, complete with "shaving rash" effect) and functional, and the Blu-Ray treatment of the series looks miles better than the streams you might have seen previously online, removing or heavily reducing the banding inherent in that lower bitrate format and offering up a clean, crisp look which does the job nicely.

One area where Persona 4 reigns supreme over a lot of anime is its soundtrack - again, this has been delicately and deliberately lifted from the original game, and it's superb from beginning to end; even if you've never played the PS2 game (or its more recent PS Vita reimagining) you'll fall in love with it instantly.  Another piece of good news for fans is that, unlike the US release, the UK Blu-Ray of this first volume features both the Japanese and English language tracks, both of which have their own strengths and weaknesses and both of which are eminently watchable - no matter your language of choice, you won't be disappointed here.  For those sticking with Japanese audio, the subtitles are mostly top-notch save from the occasional missing word here and there, and the disappointing omission of any translation for Narukami's "status" screen which appears as the show's mid-episode eyecatch to chart his development and progress.

Alongside the first nine episodes of the series, Kaze UK's release also contains both the TV broadcast and "Director's Cut" versions of episode one - as the original TV broadcast was rushed so as to be completed on time and ended up being rather messy as a result, you're best served just sticking with the Director's Cut version here - karaoke versions of the show's opening and ending theme which would be great to sing along to were they not sped up for some unfathomable reason, and the usual trailers and TV spots to make for a satisfyingly complete package.

Overall, this first of three volumes is a great start to Persona 4's animated entrance to the UK - even if you've never played the game before, there's a compelling story to be found and a well-balanced mix of mystery and humour topped off with a little action here and there.  By managing to dodge many of the pitfalls of video game adaptations such as slow pacing or catering too heavily towards existing fans, it succeeds in being a late entry as one of the year's more entertaining anime viewing experiences. With the story all set to expand moving forward, 2013 should see this strong start really "bear fruit", as Teddie would say.

English and Japanese audio with English and French subtitles.  Extras include a "Director's Cut" version of episode one, karaoke opening and ending themes, teaser and full trailers, and "Jikken-kun" bonus feature.

8
A well-balanced blend of elements makes this a strong and entertaining start to the series that will appeal to both existing fans of the game and newcomers.
COMMENT AND DISCUSS
blog comments powered by Disqus