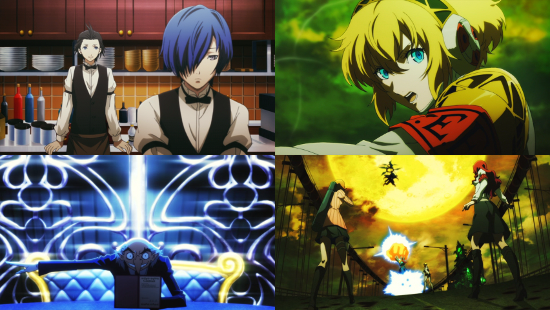 I’ve spent the first two Persona 3 movies (adapted from the video game of the same name) feeling unsatisfied yet hopeful for future instalments. This now being the third movie in the quadrilogy, one would have to assume that the previous good signs that the creators get it would start to pay off, providing the experience I was looking forward to surely?

This third movie in the series sees our team of misfits, now fully assembled, taking on what they think is the last of the big Shadows that were unleashed ten years ago by an experiment gone horribly, horribly wrong. However, just as S.E.E.S. gathers to have their victory celebration, the Dark Hour kicks in again and they are left bewildered. Wasn’t this phenomena supposed to stop now that the Shadows have been defeated? It turns out that things are not quite as they seem, and as the group struggles to come to terms with what is happening, a strange new face approaches Makoto...

Sadly, my sustained hopes for this movie, and the series as a whole, have been exhausted. The movie ranges all over the place with little formative structure, giving you a confusing melange of various “Persona-ish” elements as it tries, and fails, to sort itself out and tell a coherent story cut out of the overarching plotline. There are a number of key pivotal moments within this film but they feel cut adrift, and are not fully focused on even when they are transpiring. Part of this feeling may admittedly be down to the fact that I know what is coming, and so instead of being surprised by the events themselves I was a lot less pleasantly surprised by the execution and found myself asking “What? Why are they doing it this way? In this order?” multiple times over the hour and a half, befuddled by how the direction was squandering its content.
This left the film feeling tonally empty, a great gulf opening up and swallowing the characters whole, leaving them unable to take action or engage in a position to meet the aftermath of the events that have taken place. It leaves you little to grasp onto or connect with as a viewer.

The movie starts you out at an expected “final” fight against the large shadows, making no attempt to catch you up to or clue you into the fact that time has jumped a month since the closing credits of the preceeding entry in the series. Right from the off this leaves you on uncertain ground, and this continues as the film has a very weird back and forth in providing you this fight up front, then going back and filling in the thematic - but not the actual chronological - events for it afterwards. It feels very disjointed and while I will admit that the source material had some elements of this in its original structure, this film exacerabates and creates new stress points.

Strega, the Persona-using antagonists introduced in the previous movie, are back and crop up throughout the movie, but in a strangely threadbare fashion that undercuts their importance and leaves you feeling that there were scenes involving them left on the cutting room floor. You do get lots of scenes involving Chidori, the chunnibyou-before-the-term-was-well-known too-moe-to-live girl and her weird relationship with Junpei, but this plot thread also feels weirdly cut short - while briefly hinted at in the previous film, you are now left you with a romance subplot that hangs around for far too long, heavily pregnant with an obvious outcome primed for you.

A critical new character is introduced, and raises no end of red flags in an insufferable fashion until their “deal” is explained at the very tail end of the film, teasing but not actually setting up the stage for the fourth and final film. This is not entirely the fault of the film - the original game had ten or so hours to dilute this character arc in rather than needing to compress it into an hour, but it feels that at every opportunity they made these interactions the most obnoxious they possibly be. All the plot components are here, but the way they are all strung together renders them less than the sum of their parts, making the movie as a whole feel like a weak, flaccid, and even confusing affair.

My previous verdicts on the art and music for this movie could be directly copy-and-pasted from the reviews of the previous instalments of this movie series. It’s still nice, but there aren’t really any new tricks on show here, or anything to particulaly elevate it. One thing I will explicitly call out is the new Lotus Juice track that plays during the opening fight scene - its a really good track, even as someone who has started to become accustomed to the artist's (still great) output.

Much like the previous two films, this entry also comes in a very bare-bones on-disc release - however it is now very likely you have already made peace with the value proposition of Anime Limited’s release of this film series.

At the end of this film, instead of getting excited for the upcoming finale I was left feeling deflated and resigned to there being a fourth installment to slog through now it has become apparent that my previous hopes for this film series are, barring some form of massive improvement, going to be betrayed. It looks and sounds as good as the previous entries, but man alive what an unenjoyable mess the direction reduces it to.

Japanese 5.1 audio with English subtitles. This Collector's Edition comes with a subtitle-only copy of the film on Blu-ray and DVD, along with expanded packaging and booklet.

4
This third film leaves us with a movie series that is a shadow of what it could be.
COMMENT AND DISCUSS
blog comments powered by Disqus