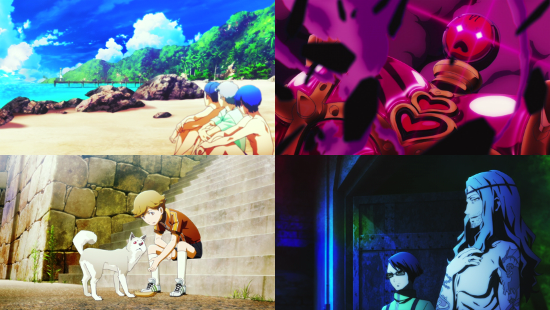 I was not entirely sold on the first instalment of this film series adaptation of the Persona 3 video game, but did admit in my closing remarks that I was hopeful for the remaining parts given what had been shown. Now this second film is out, I’ve come back to see how this anticipation has borne out.

Makoto Yuki has found himself a new sense of purpose. With a staunch set of allies (perhaps even friends) beside him he takes part in S.E.E.S, an extracurricular club living in his dorm that fight mysterious Shadows during a secret hour after midnight that only a select few can experience. Having now grasped that the most dangerous of the Shadows appear on a lunar cycle, the mission ahead of the team looks set - however, new members of the group bring their own tensions and baggage, and the secret behind the source of the shadows threatens to tear the group apart. Can the rag-tag band stick together, even as threats from without and within start to pile up against them?

This second movie really jumps off in a big way in regards to its cast - after giving you a set of just-about-believable high schoolers in the first movie, this film introduces you to an android, a 12-year old boy in short shorts, a Persona-summoning dog, and the ultimate delinquent with a heart of gold. Also the android can talk to the dog, but this is the least of the problems your suspension of disbelief will have. Whether you can swallow these new additions and buy into their problems on top of all those of the existing cast will be telling for how much you will be able to get into this film, and perhaps the rest of the series. For me, it was nice to see these cast members get their own screen time and mesh into the cast in a more dynamic way than the original games could provide.

This instalment also introduces a trio of human antagonists, the bizarre group Strega who are made up of edgy characatures and I had honestly forgot existed. This movie serves as a good introduction to this opposition group, and I would argue gives them a better spotlight than the game itself did where they found themselves diluted by the 100+ hours of gameplay and other plot points which submerged their importance.

Culling that lengthy game down into four movies again causes curious pacing, which continues in this second outing. All of the “filler” activities of engaging in social links and raising non-combat stats is pushed out entirely, and in some cases multiple weeks are jumped in a single bound to get to the next plot point. This still occurs using the same UI tricks lifted from the game which you saw in the previous film, which does help to provide you with a mental bridge for where in the calendar things are occurring. It does water down the drama however - when you have an important emotional or character moment showcased at one point and then: Whooop! The game skips two weeks ahead and you are have to presume that this taut state of affairs has hung there static for that entire length of time.

The first half of the film goes by fast, passing in the a blink of an eye as it reintroduces you to the cast in a well-structured, humourous manner that also manages to push the story back into motion, and then continues this momentum for a good while. This is honestly when this film worked best for me - it has an excellent flow to it and everything hangs together excellently even while introducing you to otherwise-absurd new characters outlined previously. Then the movie begins to coalesce, and in some ways congeal, around the interim plotline that this film decides to focus on for this installment - Ken’s quest for revenge and how it consumes him.

I had utterly forgotten about this subplot from my time playing the game, as it was a background element undercut by the surrounding video game mechanics (which immediately gave away what was going to happen) and gets a much larger airing here. While it gives the film a lot more structure and allows it to stand alone it also slows down the pace a great deal as it keeps cutting back and forth to the unfolding overarching plotline, Strega hanging around in the background and (again) Makoto having a shoehorned-in emotional conflict that he has to resolve. I’m honestly not sure why this was last item was brought up again - it drags the resolution of the film down and I thought it had been taken care of in the previous film. This time it has the added frustration of muddying the other ongoing storylines and dragging what should be an awesome fight scene into stuttering mediocrity. It really distracts from the other, much more interesting, on-going storylines and makes the Ken story beat feel like a wet fart when it wraps up.

One facet of this adaptation that I am unable to ignore is that Ken is voiced by Megumi Ogata, and sounds exactly like Shinji Ikari (of Evangelion fame) which makes this character both unintentionally hilarious and bizarre. As someone used to the English dub of Persona 3, this was very unexpected and made me see the character in an entirely new (and honestly diminished) light.

This film keeps up the visual tricks from the first instalment; however the effect is admittedly slightly diminished in this case - familiarity breeding contempt and all that. It maintains the excellent use of stark lighting and a sickly-looking colour palette, using a lot of metallic oil-slick-reflection colours that provide it the same interesting visual treatment. This is especially true, again, with the Personae that the cast summon to do their bidding and the Shadows they come up against, which does lend to some visually interesting fights when they are not being constrained (again) by the character drama. Once again, the production values are not quite up to what you would like to see from a movie, settling in around the “well-made TV series” level when it isn’t having issues keeping the characters on model.

We also have the soundtrack returning from the first movie, which itself returns from the video game proper, and it all fits together very nicely, even if there is nothing that really stands out to make note of here.

Much like the previous film, this second entry also comes in a very bare-bones release. However, if you have picked the first movie up and are now considering the second one, it is likely you have already made peace with the value proposition of Anime Limited’s release of this film series.

Persona 3 Movie 2 is very much a "two steps forward, one step back" kind of effort. It has an effortless first half, and then manages to resurrect unwanted issues from the first film alongside some new and exciting problems to drag the film down as it rolls towards its conclusion. At the risk of sounding like a broken record, I still hold out hope for the remaining pair of installments - these two efforts have shown that the creators have a good grasp on the source material, and hopefully they can throw off their self-imposed restraints to deliver a more sublime package in the third offering.

Japanese 5.1 audio with English subtitles. The Collector's Edition comes with a subtitle-only copy of the film on Blu-ray and DVD, along with expanded packaging and booklet. There are no on-disc extras.

5
An impressive opening weighed down by both old and new issues in the second half, but still retaining a spark within.
COMMENT AND DISCUSS
blog comments powered by Disqus