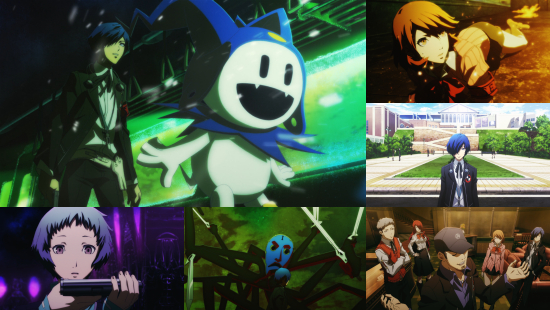 I have a problem. I own the original video game of Persona 3 - of which this set of movies is an adapation of - five times. US and UK versions of both the original and revamped FES versions, and a copy of the PSP remake. Yet I still want to play it once more! So, instead of shoveling another 80~ hours into the video game version, let's have a look at this movie version and see if it can scratch my itch to see the story through once again.

Makoto Yuki has had a rough go of it. Since he lost his parents in an accident a decade ago he has been shuffled from relative to relative, never quite settling down. He’s become quite taciturn during these years, retreating into his shell and oppressive haircut. Now he has come to Tatsumi Port Island, the site of that accident a year ago, to join Gekkoukan High School, a prestigious academy. Not everything is well in the glittering city however - a growing number of people have been found in a comatose state, labelled “Apathy Syndrome” by the press, and on the way to his dorm Makato walks through silent streets lined with ominous obsidian coffins. Something is not quite what it seems in Tatsumi Port Island, something that emerges in the dead of night to threaten Makoto and his newfound schoolmates...

The Persona 3 movies have an unenviable task - take an 80 hour dungeon crawler/visual novel hybrid RPG and cut it down into four coherent theatrical units while still retaining (and if possible building on) the charm that pulled so many people through a (very) long game and into the franchise as a whole. It certainly has a wealth of raw material to work with, between the character and monster designs, character storylines, and especially the music. Oh, the music... it's so good! So good that it can be handily dropped into the film and work perfectly.

This first film does hew perhaps a little too close to the source at times however, lifting visual tricks from the game UI which start out as funny but then quickly get old, such as a visual of a green clock exploding outwards which will never not be corny. Another UI element it lifts is the linear calendar used to show the movement of time - while in the game this would increment between days, in the film it is used to show large swathes of time passing by as it skips between the various scenes it has chosen to retain. It comes across feeling somewhat mercanary and loses a little of the “normal life” scense that help to counterbalance the supernatual and mortal peril that besets the cast on a frequent basis, although thankfully there still remain a few scenes of this pleasant mundanity.

There is a lot of cool stuff that can be freed from the strict confines of the video game’s structure, and the movie shows signs that it can do just that... until you get to the last 35 minutes or so of the feature when it loses sight of what it is doing and goes utterly flaccid, which is doubly frustrating as it is mangling a part of the original game that was, to abuse a term, hype. The thing that the film wrestles with and fails at handling is that Makoto is a blank slate protagonist who is filled in and made whole by his social interactions with other people. It tries to pull the trigger on this confict to provide tension in the rear end of the film and goes down in a very dull ball of flames, making our protagonist somehow even less believable than a blank slate character and also making him a very lame savior, siphoniong all the tension out of events. This decision also manages to foul up another, interweaving plotline concerning Fuuka, one of his schoolfriends, who has her introduction and personal strife greatly enhanced and developed by this film adaptation only to then have it subsumed by Makoto faffing around with his lame emotional turmoil and unsatisfying resolution. By the time the film closes it is with relief as (it is hoped) the creators have left this weak nonsense behind them in future installments.

But lets not entirely dwell entirely on the negatives, there are definately some more good spots in the film aside from the music - when it wants to (and isn’t flailing about), the movie can put together some visually fascinating scenes, particulaly during the earlier fight scenes. The film uses lighting in a very stark manner which generally works to its benefit - the majority of the important scenes take place at night, after all. This means that daytime events often look blown out with light, making them very stark and unnatural. This carries over into the supernatural “Dark Hour” that the characters inhabit, bringing with it a restrained sickly palette of violets, greens, and yellows. This intersects well with the colour pallete used during combat and for the Shadows - a lot of metallic colours, oil-slicked dark tones, red and black. I’m taking pains to outline all of this because when it all clashes together during combat scenes, in particular the first “main” fight, it looks utterly outstanding and really catapults things to another level. Sadly not all of the visuals are carried off quite so well, with the human cast sometimes looking quirky and off-model, which is a little shocking for realtively simplistic designs and what is supposed to be a theatrical presentation. Junpei never quite has it all together but it seems a little unfair to have his eyes sliding off his face at times, is all I’m saying.

A final note about this release - the disc itself is staggeringly bare-bones. We recieved a Blu-ray check disc for this review and it contains only the film, subtitled. There isn’t even any music playing during the disc menu. The main thing that stood out to me was the lack of a dub - a real shame but I can imagine that getting one made for these movies would be a massive catch-22 as getting the game’s (very good!) voice cast back would likely be a logistical (and possibly costly) nightmare, but also recording a dub with new people would unleash a torrent of complains much like this one. Looking at the Anime Limited store it becomes apparent that to get the Blu-ray (which is worthwhile for the visuals) behooves you to buy the Collector's Edition - even discounted this is still £25, which is beyond what I personally would fork out or the movie even with the physical extras (which I do not have and so cannot fully comment on, admittedly).

This first movie of Persona 3 conflicts me - it is clear that the people behind it get the material that they are adapting and can bring the material to the screen while enhancing it, only to squander the last third of this film. It creates a bizarre combined feeling where I am lukewarm on this film yet still very hopeful for the three to come. Lets see if this anticipation is rewarded.

Collectors edition comes with a subtitle-only copy of the film on Blu-ray and DVD, along with expanded packaging and booklet. There are no on-disc extras.

5
While the last third leaves something to be desired, this film still shows plenty of persona-lity.
COMMENT AND DISCUSS
blog comments powered by Disqus