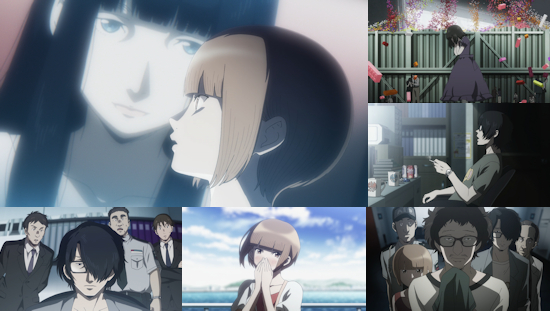 If you've read my musings about other series, or indeed heard my pleas for more good old-fashioned murder mystery anime to come into existence, then you can probably imagine that I was more than a little enthused about the prospect of The Perfect Insider coming to Crunchyroll. A locked-room mystery, based on a relatively well-known novel and airing on Fuji Television's noitaminA slot for the autumn - it's a perfect confluence of elements, but can it succeed where a number of other shows have failed?

For all of its promise of a murder investigation to come, much of The Perfect Insider is actually more character study than mystery series, and this aspect to the show is clear from the off as we spend its opening episode with our two core characters - intelligent but detached university professor Sohei Saikawa, and student who has a long history with Saikawa and dotes upon him Moe Nishizono. This sets the tone of the relationship between our main pairing and both their differences and similarities, and thankfully it's a relationship which works well to power the series forward with the viewer well aware of the nature of both characters and how they regard one another.

As the shifting sands of this relationship ebb and flow in some organic ways throughout the course of the series, we ultimately move towards the mystery that defines the show - the case of Dr. Shiki Magata, a woman who has quite literally locked herself away as the head of a private research lab on a remote island having murdered her parents as a teenager. Having successfully avoided prosecution on account of her supposed diminished responsibility, the young genius user her wealth to construct an impressive establishment, locking herself within the heart of its confines in such a way that even her employees have never met her in any fashion beyond video conferences.

It's the extremely reclusive nature of Shiki that makes her murder all the more implausible at first glimpse - how did someone get into her heavily secured room? How did they get out? What was their motive? Why has the killer left those investigating the murder with the cryptic statement that "Everything becomes F" - are they just really into Dragon Ball Z: Resurrection F?

As the questions pile up, worse is yet to come, with more death on the horizon and with the facilities elaborate computer and communication systems going haywire as Shiki Magata's death occurs, leaving them unable to contact the police. Of course, it just so happens that Saikawa and Nishizono are visiting the lab as a detour from a university camp on the island at the time this all transpires, leaving them to lead the way in trying to fathom who killed the reclusive Doctor and why.

Although that setup sounds like traditional locked room mystery fare with a modern twist, that would be to belie the unusual way in which this series handles itself. As we've already noticed, the series is as much about Saikawa and Nishizono's relationship as it is about anything, and even their ties to Shiki Magata often only serve to further the explanation of those main characters, their history and differing views on the world. Thankfully, this isn't a bad thing by any stretch of the imagination - the nature of the two leads and the opportunities the plot gives for them to be both introspective one moment and laid bare before others the next, and there's sufficient chemistry between them both to make for an engaging story in its own right.

In comparison, the murder mystery side of the tale often takes a back seat but still has some strong moments as big revelations and realisations click into place and slowly uncover the truth of what transpired in a way that still leaves rooms for twists and turns right through to its slightly odd finale that is both an important climax to events and a slightly out of place epilogue rolled into one.

The oddities don't begin and end there either, which leads us to perhaps the biggest problem that I faced watching The Perfect Insider - the way its characters behave, particularly in the wake of Shiki Magata's death. Given the brutal nature of the killing and the possibility that the culprit is still at large, nobody really seems bothered about the whole situation - staff carry on sitting around drinking coffee, another character is more worried about having someone collect her bags than the death of a relative, and even Moe and Sohei don't quite seem to comprehend the severity of what they're caught up in at times. This gives parts of the show a surreal and emotionless sheen, and I find it hard to discern whether this is a deliberate choice (many of the characters are supposedly geniuses, and that often goes hand-in-hand with unusual reactions to social cues of any kind) or simple bad writing. It doesn't wreck the series at any point, but it can feel frustrating when you seem to be more invested in the events at hand then the characters living through them directly!

An interesting story that feels curiously "off" in place is effectively the summary of The Perfect Insider - it has some great moments in service of its character building and mystery, but too often loses its way or gets distracted. It feels like a mirror to its cast of characters in that sense - clearly all intelligent, but also very human and all too easily capable of being side-tracked or simply not communicating its ideas succinctly enough.

The presentation of the series is nothing to write home about, but it fits the feel of the series - leaning away from your typical anime character designs towards something more realistic, and with a relatively drab palette that leaves its most striking imagery to come from sequences spent within a virtual reality of sorts. In other words, the series is fitting but never spectacular, although it does get bonus points for some catchy opening and ending themes.

All of this leaves us with a story that is unique and at least worthy of your consideration, but one that is difficult to recommend outright on account of its failings and muddled moments. If you're looking for a more overt murder mystery series then this still won't scratch that itch, but if you're in the market for a character-centric drama that just happens to take place around a locked room murder then there's more for you to get your teeth into here.

You can watch The Perfect Insider in streaming form on Crunchyroll.

7
Its tone and handling of its story sometimes makes it feel distant, but there are enough intriguing elements about The Perfect Insider to make for a series we'd cautiously recommend watching.
COMMENT AND DISCUSS
blog comments powered by Disqus