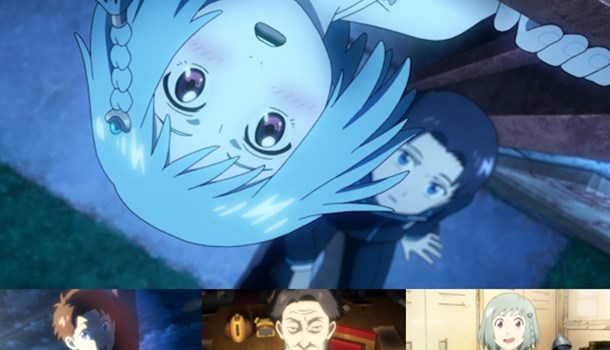 There are certain immutable laws which man simply shouldn't even countenance tinkering with, no matter the potential rewards, and amongst those laws surely gravity is the most import of them all. After all, without it, what would there be to stop everything and everyone simply floating off into space?

It's just such an experiment to tinker with gravity itself that leads to the world imagined in Yasushiro Yoshiura's Patema Inverted - when the experiment is botched, so all and sundry simply floats off into the sky, leaving its world and populace destroyed. For whatever reason however, not everyone is affected by this change, ensuring that humanity is split into two with those who walk normally (at least as they see it) upon the Earth, and the so-called "Inverts" who are forced to live underground lest they fall into the sky.

At its core, Patema Inverted is the story of two individuals who dare to think beyond the narrow worlds they've been presented with. For the titular Patema life underground is deeply unsatisfactory, and even exploring the deepest, darkest reaches of her cavernous home isn't enough to satisfy her given that a single photograph of the wide expanses of the world above has spurred her imagination. Meanwhile, Age is a young man who gets to enjoy looking up at those vast skies, but only to find himself chided for doing so in the strict, dystopian world of Aiga, where the sky is seen as nothing more than the hell which swallowed up the sinners that dare tamper with the laws of nature.

Of course, circumstances contrive to bring these two individuals together, and although they both see the world in very different ways - both literally and figuratively - a kinship soon grows between them from their shared sense of adventure and a longing to break out of the confines of the respective worlds that they know, fostered in both cases by elders who themselves exhibited a same desire to reach out and touch the unknown. Then again, having inadvertently already broken free of that world, Patema now finds herself facing numerous dangers in a world where the sky replaces the ground beneath her feet and the malevolent ruler of Aiga wants to use her as a starting point in the extermination of all Inverts...

The first thing that strikes you about Patema Inverted is the question "why has nobody really run with this idea before?" Certainly, the idea of splitting mankind down the middle via poles of gravity isn't entirely original, but it's a wonderful high concept that is perfectly suited to the medium of animation - a fact which Yoshirua's film exhibits and proves deftly with its sweeping one-hundred and eighty degree camera rotations and impeccable sense of how and when to shift the camera's point of view to coincide with major shifts in situation for the two main characters. Even when other aspects of the film stumble, the sense of fun brought about by this high concept alone drives it forward incessantly, and the film's ever-more playful toying with the viewer's expectations in its final act could so easily have destroyed that concept entirely yet somehow only serves to make it all the more jaw-dropping.

Helping matters along is the film's cast - Age is initially difficult to like but springs to life in Patema's company, and Patema herself is energetic, tomboyish and entirely believable while also providing a perfect hub for the movie's moments of impeccable comedy; there's a reason why she gets top billing here, and it's more to do with her personality and attitude than her feminine wiles. Backing these two up is a handful of other likeable individuals - Age is rather a loner and misses out on anyone else to push his character along, but Patema's extended family also offer warmth and comedy as a driving force for events in their own right.

It's a shame that this well-realised cast is offset by the show's "baddie" - Aiga's ruler Izamura is the worst kind of pantomime villain (expect to see him in Jack and the Beanstalk in a theatre near you), all maniacal laughter and being evil for the sake of it without anything to flesh out the reasons for his behaviour. If there was a dark backstory that had made this man what he is (and surely there must be one, in a world where so many lives have been lost due to the folly of others), then perhaps it might have offered a touch of humanity and understanding to anchor his unceasing lack of mercy or compassion, but without it he looks like a ridiculous figure that evokes laughter from the viewer when he should elicit fear. As the sole antagonist of the film, it's a major issue that could at least have been lessened with a little more creativity when building up his character and raison d'etre.

Thankfully, although this oversight leaves the film falling short of Yoshiura's previous works as a director, it doesn't destroy it entirely - Patema Inverted is a beautiful movie in a lot of ways. Visually, its locations and varied, detailed and considered; musically, its soundtrack is varied and strong throughout; thematically, it's encouragement of exploration, individuality and looking up to the skies and not down at our feet is hardly unique but still easy to rally alongside; emotionally, Patema and Age's story of uncertainty and fear of the unknown assuaged by companionship and trust is utterly heart-warming. Even if your head is pointing out issues with the story and characters, your heart is having a whale of a time, and this is a film that allows your heart to win that argument every single time.

Given all those elements of beauty, it's entirely fitting that Patema Inverted's Kickstarter-funded Ultimate Edition (full disclosure: this reviewer was one of those Kickstarter backers) is the most sumptuous release we've seen yet from Anime Limited. It's oversized box with O-card sleeve looks wonderful (ignoring the misspelling of the director's name on the front of the sleeve!), and although many aren't a fan of the particular Digipak design used within it at least looks the part, holding not only the film on DVD and Blu-ray - themselves host to a stack of bonus material including subtitled interviews and cast commentaries - but also that aforementioned official soundtrack on CD. The real gem within however is the Official Design Works book, an exhaustive tome packed with interviews, concept art, character designs, storyboards, location designs and even an additional short story. The fact that I had to drag myself away from browsing through the book again on a couple of occasions while writing this review tells you about its quality, and if you're a fan of the film then you simply couldn't ask for anything more. If you want to take a peek at those contents of yourself, then you'd be well served to head over and take a look at our "Under the Covers" unboxing video of this Ultimate Edition release.

In closing, it says a lot about the works of Yasuhiro Yoshiura that Patema Inverted could be considered his "worst" effort thus far while still being a definite success in many respects - in fact, I suspect we should simply replace the word "worst" with simply "different", as this is more of a flight of fantasy than the kind of serious sci-fi fare we've come to expect from him, and in that sense it's actually quite exciting to see him tackle something different and potentially break into the conscience of a wider realm of anime fandom. Patema Inverted is undermined - quite heavily in places - by its poorly-written antagonist, but thankfully the film has more than enough solid ground beneath it to create a compelling, moving and fun film that is worth watching, especially given the existence of a wonderfully cheap Standard Edition (or a mid-level Collector's Edition) if this Ultimate treatment is too rich for your blood.

If, on the other hand, you love Yasuhiro Yoshiura's work and either trust his judgement or have already seen and enjoyed Patema Inverted, the sheer beauty and quality of this Ultimate Edition release really can't be over-stated, and you won't find many more comprehensive packages of supplementary materials around an anime movie available in English.

Physical contents for the Ultimate Edition include the film on both DVD and Blu-ray; official soundtrack CD; 136-page Official Design Works art book.

8
The film is undermined by a pantomime-level antagonist, but Patema Inverted is otherwise a wonderfully entertaining and smartly delivered film, bolstered by a sumptuous, comprehensive Ultimate Edition.
LATEST REVIEWS
Girls' Last Tour