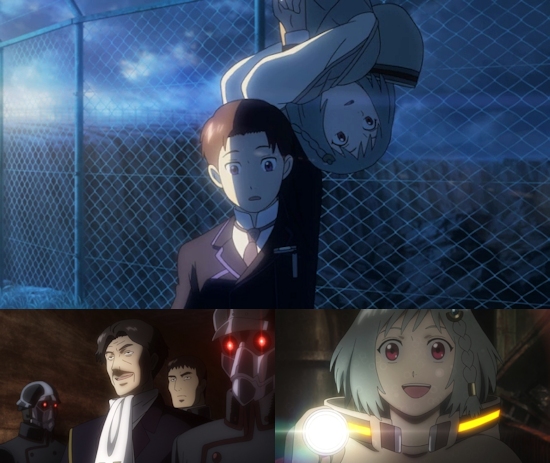 Many of humanity's problems and disagreements can be put down to a simple matter of perspective - two factions seeing things from entirely different points of view. But what if that kind of clash of ideologies were to be taken literally? Welcome to Patema Inverted, the latest work to come from Yasuhiro Yoshiura, who many of you may know as the director of Time of Eve.

The film begins through the lens of the titular Patema, a curious girl with a penchant for exploring even the most dangerous areas of the underground world within which she and her family lives. In spite of the frustrations and concerns of those around her, Patema has no intentions of quelling her thirst for exploration, and what she really wants to see is the outside world - a dream fostered in her by now-missing big brother figure from her past Lagos. Little does Patema know that she's about to get her wish, and then some...

On the other side of this story we have Age, a student at a strict academy built to produce model citizens like a chillingly mechanical production line for humanity itself. Set against these values, Age is something of a delinquent who also dreams of exploration and escaping from his mundane life, and his willingness to skip school leads him to the adventure of a lifetime as a girl suddenly falls... not from the sky, but into the sky from beneath the ground.

The girl is, of course, Patema, and from Age's point of view she's upside-down. Then again, from Patema's point of view it's Age that's upside-down. Thus the core of Patema Inverted is born, set against a (ludicrous, admittedly) back story where an experiment to capture the power of gravity went badly wrong, leaving some of its populace with a completely reversed centre of gravity that forces them to live underground while others remains above the surface, even going so far as to call the "Inverts" which reside beneath them sinners who deserve to be punished.

Of course, once Patema and Age get to know one another and learn not only to accept but actively take advantage of the eccentricities of their independent gravitational pulls, it becomes clear to them that they aren't really all that different after all. However, the powers that be within Age's world are not going to accept the appearance of an Invert lightly, and thus Patema is quickly captured. Can Age step up to the plate and rescue his new friend? This is just the start of a chain of events that rock the entire world to its foundations as the movie reaches its climatic twist.

Even before the insanity of its core concept reaches your brain, Patema Inverted delivers what could genuinely be called a great moment in cinema - the moment where Patema and Age first meet is breath-taking in its presentation and sheer audacity, leaving your mind reeling to get a foothold on things which are taken for granted in any other movie; things like "which way is up?"

It's a crazy but wonderful idea that is played with superbly throughout the film - at times the camera will rotate through 180 degrees to move us between Patema or Age's view of the world, while at others it'll switch from one to the other without explicitly telling the viewer to ensure that they endure at least some of the same moments of disorientation as the characters. It's a plot device that could easily have been nothing more than a gimmick, but almost everything within Patema Inverted succeeds in playing by its own rules and then using the world that it's built to subvert your expectations with a couple of big reveals that work better than they arguably should.

The film also understands when to have a laugh or a little fun with its characters and concept too - there are some fantastic moments of comedy sprinkled throughout the movie, although admittedly Patema herself steals the show here as the film often feels just that little bit heavier and slower when she isn't on-screen. Then again, Age also has his moments, and the building relationship between the two leads works well alongside the story itself to feel both believable and satisfying throughout.

Conversely, the film's biggest issue comes from its villain, the head of the above-ground society of Argis who really couldn't be much more of a clichéd bad guy if he was sat in a leather chair stroking a cat. From his first appearance onwards, everything that he does screams "look at me, I'm evil", but his motivations are never made clear and as such the whole thing feels overblown for no reason and undermines a lot of the stronger character moments that appear throughout the movie.

It's probably also fair to say that this isn't as thought-provoking a production as Time of Eve - what it has to say about mankind is pretty rote and obvious stuff, and a far cry from the more stimulating fare of Yoshiura's last effort. This isn't necessarily an outright criticism - not every work has to deconstruct the human psyche piece by piece or anything of the sort - but it does feel like there were perhaps some unexplored opportunities within the world presented here that were left alone in the name of pure entertainment.

In terms of that entertainment though, Patema Inverted is a definite success - full of the confidence required to present a scenario that would otherwise be sheer lunacy in a believable and well plotted manner, and with an assured hand that builds on its premise in terms of both its characters and the world that they inhabit. The film is equally assured visually too, with a lot of care put into its locations and characters to ensure that its scenario works, spoiled only slightly by a few scenes which seem to use the same half-framerate CG as Time of Eve, which is even more distracting within this movie.

As a whole, Patema Inverted is a film that absolutely deserves to be watched (provided you don't suffer badly from vertigo) - almost ceaselessly gripping and with a distinct and memorable premise that could have gone horribly wrong under the direction of a lesser individual at the helm. After the critical success of Time of Eve, this feels like a film that could, and probably should, add Yasuhiro Yoshiura to the radar of anime fandom alongside the likes of Mamoru Hosoda, and we most certainly hope this isn't the last we'll see of this particular outing in the UK.

8
No matter which way you look at it, Patema Inverted is an entertaining and enthralling take on an idea that would normally be too ridiculous to even consider.
COMMENT AND DISCUSS
blog comments powered by Disqus