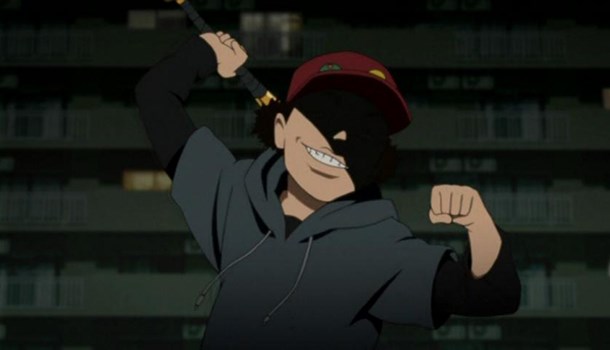 After all the fantasy and giant mecha anime I've seen of late, MVM's latest gives us a nice break from familiar themes and throws us into an instantly recognisable world or corruption, sex and insanity. It is, of course, our world.

As urban myths go, the mystery surrounding a baseball-bat wielding 12 year old who strikes at those with fear or regret in their hearts is a pretty good one. With the nickname Lil' Slugger, there have been no concrete reports about him - until now...

For those familiar with Satoshi Kon's other work, (most notably for us in the UK, Perfect Blue), Paranoia Agent should feel like familiar territory. The series is a psychological thriller which sees the story unfold in a relay style, with the end of each episode giving us some closure before moving on to the next character and their own experiences with both their demons and Lil' Slugger himself.

The stories themselves are oddities. Ranging from tales of delusion to dual personalities, the series finds its fun in the most bizarre intricacies of the human psyche, taking you down paths you’d rather not tread, but with a knowing wink along the way – Paranoia Agent is your guide to the absurd, and it loves its job.

Kon himself has only a few directorial features to his name, which makes the assured pacing and direction that much more impressive. Although his style will undoubtedly be off-putting for some, given the eerie nature of his themes and the almost intentionally ugly characters, but we’re not looking at an example of a genre here, this is a unique item and deserves to be admired for how it takes shape.

Ultimately, what we have here is an item that demonstrates anime at its most flexible and alluring. You may not leave a sitting with an overwhelming desire to see more, but you do feel richer for the experience, and it stays with you long after the credits have rolled.
8
Certainly different, and not for everyone, but for those that love the unusual, Paranoia Agent will be right up their alley.