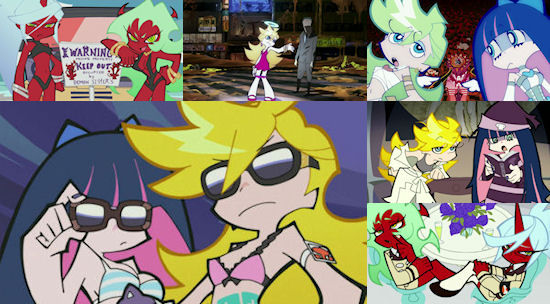 Come the end of the first three episodes of Panty & Stocking with Garterbelt, it seemed like we'd already seen everything that this rather unique anime from GAINAX was capable of - sure, it was visually impressive from time to time as it belied its simple animation style, but the gross-out humour and swearing that peppered every second of the series seemed like a short-lived concept that would struggle to hold anyone's interest beyond those first few instalments.

Well, let me state on the record right here and now: I was wrong.  That isn't to say that the rest of Panty & Stocking with Garterbelt is a magnum opus of deep concepts and beautifully crafted scripts - far from it, the series continues to try and plunder the depths of bodily fluid and sexual gags throughout - but it does bring us some of the most tremendous anime moments of 2010 when it chooses to step away from its usual material to do something rather different.

This experimental streak which runs through certain episodes brings us a few real gems, such as one episode segment which completely switches animation style to tell the miserable tale of a salary man living in Daten City in compelling fashion, another which follows Panty and Stocking's loyal yet forever put-upon pet Chuck via a manner of eerily intriguing animation devices, and a five minute chunk of one episode where any thoughts of a plot are thrown to the wind in deference to creating an MTV-style music video which parodies everything from The Beatles to Lady Gaga via (of course) Gorillaz.

Thankfully, these left-field offerings aren't the only improvements to the series as it progresses, as it also sharpens up its more typical humour and story-telling throughout - fans of Transformers (the original series, not Michael Bay's monstrosities) will fall out of their seats at a fantastic half-episode which parodies the robots in disguise mercilessly, South Park also gets some laugh out loud nods and the introduction of some rivals for Panty and Stocking in the form of Scanty and Kneesocks adds an extra dimension to proceedings as the series builds to its "serious" climax.  Oh okay, it isn't even vaguely serious, but it's the closest the show ever gets to a coherent plot.  Is that a suggestion of a second season I see as the final episode comes to a baffling conclusion?  Given the show's playful nature, it's hard to take even this promise of continuation seriously.

Once that final teaser has burned itself into our collective retina, what can we make of Panty & Stocking with Garterbelt?  If you demand consistency from your anime viewing experience, this series certainly isn't for you as it veers wildly from being borderline terrible to absolute genius in the blink of a bipolar eye.  On the other hand, if you can live with occasional aberrations and eye-rollingly stupid moments, then there are plenty of gems to be found within each episode - its animation will still take your breath away on occasion, some of its gags will leave you breathless with laughter, and if nothing else you can't help but admire the sense of adventure and experimentation that GAINAX have brought to this series.

Panty & Stocking with Garterbelt may be an obscene love letter to American cartoons, comedy and culture at its heart, but there's also far more to it than that - in an era where daring to be different is becoming an ever-more impossible task for cash-strapped anime producers, you have to applaud GAINAX for breaking the mould in pretty much every arena you can image, and more importantly for giving directors working on the show the freedom to basically do whatever the Hell they wanted most of the time.  The resulting enthusiasm is quite infectious and you can't help but get carried along by the obvious passion with which much of this series has been created as it goes off in whatever direction the wind takes it.  Those directions aren't necessarily always the right ones to amuse and entertain the viewer, but when this series does get it right it makes for some unforgettable, and probably unrepeatable, anime viewing.

In short, this is an experience that the dedicated anime fan probably shouldn't miss, provided you can stomach its sense of humour and aberrant nature.

7
It veers from God-awful to genius, but you simply won't want to miss the moments where this series demonstrates the latter, as they rank amongst the best this year has had to offer.
COMMENT AND DISCUSS
blog comments powered by Disqus