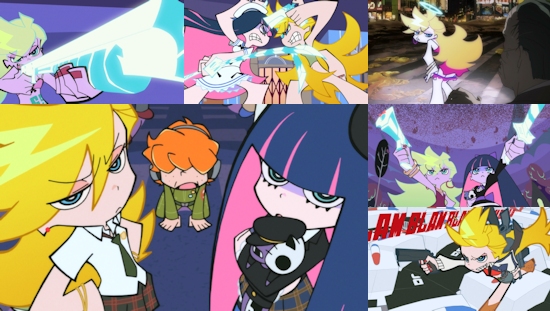 We've already covered GAINAX's off-the-wall comedy series Panty & Stocking with Garterbelt so many times - in streaming form, when its initially faulty UK DVD hit, and then again for the fixed DVD release - that it might seem a little pointless to talk about the series once again. However, on the cusp of the show's UK Blu-Ray release, we can't help but get excited enough to want to discuss it, no matter how briefly.

If you don't already know, Panty & Stocking with Garterbelt takes place in Daten City, a far from utopian location that also provides the home to two so-called Angels, the show's titular sisters Panty and Stocking Anarchy. As their family name suggests, these are no ordinary angels, but anti-social harbingers of justice against Ghosts which are born from the unfulfilled desires of humans, even if they're more interested in sex and sweets respectively than delivering people from evil.

So the scene is set for thirteen episodes of madcap comedy, as our foul-mouthed terrible twosome wreak all kinds of havoc in the face of semen ghosts, poop ghosts and Transformers... err, ghosts. Did I mention this is an off-the-wall comedy series?

If you want a more in-depth discussion of the series itself, then I'd advise you head on over to our review of the series on DVD - as a brief recap, let's just say that the series is filthy yet funny, and fast-paced enough for weaker setups to quickly fly by thanks to every episode containing two stories, leaving only memories of the stronger tales to hand. This is the kind of series where you can spend time with your friends discussing the "best bits", and it even has some surprisingly power little moments of emotional frisson when it isn't indulging in jokes about bodily functions.

This takes us to the show's Blu-Ray release - visually speaking, Panty & Stocking is actually deceptive in its simplicity on the surface, and once you dig a little deeper there are some terrific scenes and moments of animation that fully deserve a High Definition transfer. That said, we'll be the first to admit that this isn't the best Blu-Ray transfer we've ever seen - yes, it's still a step-up from the already good-looking DVD release and it's great to see the show in all its colourful glory while freed from any NTSC to PAL conversion issues, but at the same time the entire series looks a little softer and less well-defined than you might expect from such a release. Now, we have to point out here that this really isn't Manga Entertainment's fault, nor is it down to Madman Entertainment who authored the discs in Australia - even the Japanese Blu-Ray release of the series suffers from the same issue, so don't go expecting to find a better looking release elsewhere.

In terms of the show's audio, I found myself genuinely torn down the middle - the original Japanese stereo track for the series is limited, dull and lifeless, and gets ripped to shreds by the far punchier and more dynamic Dolby TrueHD 5.1 English audio track which makes full use of the sonic assault that is the show's soundtrack and outbreaks of action that the series provides. The trouble is that the English dub is still terrible, and easily one of the worst I've ever encountered - sure, the English voice cast is having fun swearing up a storm, but such is their childish obsession with F-bombs and even the C-word that the original dialogue and key characters in the series have their meaning washed away in a sea of foul-mouthed self-indulgence. Yes, the dub does have some funny lines, but it stomps over far more of the show's original humour than it manages to keep in its wake.

Finally, it would be remiss of us not to mention the slew of extras which come with this release, taking up a hefty chunk of its second Blu-Ray - this includes all of the extras on the original DVD release complete with some new additions largely revolving around the US voice cast. In short, it's utterly comprehensive and a great addition to an already good release.

Overall, if you're new to the series and haven't yet picked it up on DVD, or love the show enough to even consider double-dipping on it, then this Blu-Ray/DVD combo pack edition is a worthwhile purchase - it isn't the best-looking Blu-Ray you'll ever buy but it's a definite upgrade from the DVD for existing owners. That said, the final, working UK release of the show on DVD is pretty sharp in its own right, so if you're perfectly happy with that version of the series then there isn't quite enough here to recommend that you drop that copy in deference to this Blu-Ray release if you own it already. Personally however, I'm more than happy to have an excuse to indulge in the series again in this Blu-Ray form, and for newcomers picking up this edition is a no-brainer.

8
Panty & Stocking remains as crudely hilarious as ever, and although this isn't the best Blu-Ray transfer you'll ever see this is still a superior release to its DVD equivalent.
COMMENT AND DISCUSS
blog comments powered by Disqus