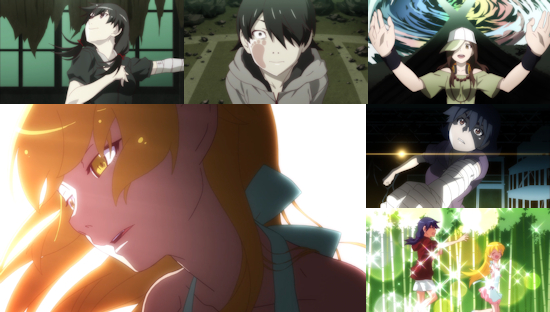 The first half of Owarimonogatari brought us some great examples of what this franchise can do when it really puts its mind to it, making full use of some members of its existing cast as well as introducing a fresh new face which allowed it to change things up a little to great effect. As it happens though, this was simply the preamble to its real story, which returns us to the timeframe of Nekomonogatari White and Araragi's troubles during that period while Hanekawa was dealing with demons of her own elsewhere.

Titled Shinobu Mail, it doesn't take a genius to figure out that this story arc returns us to the core of Kiss-Shot Acerola-Orion Heart-Under-Blade's story - not that it looks like it at first, as a pre-arranged meeting between Kanbaru and Koyomi turns sour when an immensely powerful suit of armour turns up and seems intent upon doing them harm. While they manage to escape with their lives the problem itself still hasn't gone away, and it seems that it won't go away unless Araragi deals with the situation.

The arc as a whole ties together numerous loose ends of Monogatari's various stories, be it Gaen and Kanbaru finally meeting or the necessity of Shinobu to finally confront elements of her past - all wrapped up, of course, in Araragi's continuing determination to help everyone, which causes him a real crisis here as inhabiting multiple locations at once is beyond even him.

On paper this sounds like a heady blend of heavyweight character development and story-telling, but to be honest the outcome is a decidedly mixed bag. Make no mistake, there are some classic Monogatari moments on show here, mostly revolving around Kanbaru whether it's her interactions with Koyomi or her marked aptitude for getting to the bottom of everything that's going on, and these moments alone are worth the price of admission for this story arc. However, that doesn't hide the fact that the conclusion to the story in particular feels oddly flat - what should be a satisfying emotional pay-off on multiple levels ultimately lacks and real impact, and the fact that this isn't really the end of any character's story despite being the culmination of Monogatari's "Final Season" only adds to the feeling that you've been conned somewhat. In the pantheon of great story arcs that this show has produced, this is a resolutely middling affair.

Still, at least the show's presentational values show no sign of abating - everything within Monogatari's world may look a little cheap having watched a few trailers for Kizumonogatari, but putting that unfair comparison aside this is a series that manages to present its dialogue-heavy fare in a way that never ceases to be eye-catching and engaging, further helped along by a full slate of top-notch voice performances that deliver everything from simple gags through to emotional moments strongly.

Taken as a whole, Owarimonogatari is another strong entry into its franchise that has plenty to remind fans of Araragi and company why they keep coming back for more, but much like its other iterations the overall level of quality inherent to the stories it tells is highly variable. When the series gets everything right it's an experience like no other, and even at its weaker moments it displays character development that is almost without equal within anime, but such are the astounding strengths of those high points anything that falls short seems like a disappointment. The Shinobu Mail story arc under discussion here never falls far enough to enter "disappointing" territory, but it's nowhere near the show's strongest peaks and never matches the verve of its Sodachi-centric first half. Thank goodness, then, that this isn't the true end of the Monogatari story for us after all.

You can currently watch Owarimonogatari in streaming form on Crunchyroll.

7
It has plenty of moments of comedy and character interactions that sparkle, but focus on its wider story and the second half of Owarimonogatari is surprisingly unsatisfying.
COMMENT AND DISCUSS
blog comments powered by Disqus