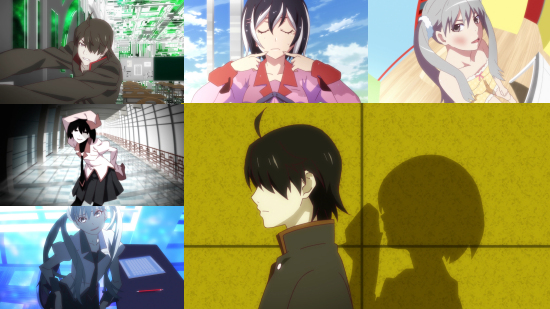 After a decidedly tepid instalment in the form of Tsukimonogatari (if you're wondering how mundane it was, I couldn't even rouse enough interest to review it for the site), the Monogatari franchise rolls back into town this autumn with the promise of more enlightening fare. Slotting into the midst of the show's increasingly convoluted timeline, just what is Koyomi Araragi up to now?

Having made some fleeting appearances in recent stories and exist as a cat always willing to jump into midst of a flock pigeons, one of the joys of Owarimonogatari thus far is finally being able to spend some significant time with the enigmatic Ougi Oshino. With her overly long sleeves and the perfect (albeit decidedly creepy) poker face, Ougi's character design alone marks her out as a person of mystery even before we remember that she's purportedy the niece of Meme Oshino.

Depending on how you look at it, the biggest mystery of all surrounding Ougi is why Araragi finds himself so drawn to her - across the course of this opening arc he repeatedly finds himself pouring his heart out to her, almost entirely unable to stop himself from revealing every detail on whatever he's quizzed once in her thrall. Such is her power that even series heavyweight Hanekawa has to deploy strongarm tactics to wrestle him away from her for his own good as the story progresses, which actually provides one of the highlights of this series thus far - watching a battle of wits between the girl who only knows what she knows and the girl who seemingly knows it all is oddly tense yet fascinating stuff.

Appropriately, Owarimonogatari kicks off with a double-length opener named Ougi Formula, which sees our protagonist locked in a bizarre room which shouldn't exist within their school building, in the kind of scenario which has you wondering whether Yuki Nagato is going to burst in at any moment. In essence, this first episode is a poster child for what Monogatari is all about - striking visuals layered over what is otherwise nothing but talking heads, as Ougi coaxes a story from Araragi's past out of him as she seeks to resolve an unexplained mystery about an incident at his previous school.

The incident in question links us directly into the next story arc, Sodachi Riddle, which sees a face from the past come back to haunt Koyomi in the form of Sodachi Oikura, a girl who has an utter detest for Araragi - an unusual outlier considering the normal reaction girls seem to have around him. Having established at least part of the basis for this hatred in our opening episode, this second story arc sees Araragi and Ougi tunnel deeper into this rabbit hole to find some disturbing truths around Sodachi's life and childhood far beyond some kind of low-key upset. Oh, and Senjyogahara punches someone in the face during this story arc, which seems like an import footnote which should be written in the records.

Owarimonogatari thus far may not have hit any of the emotional heights of which it has proved capable in the past (let's not bring up the end of Nekomonogatari White or Onimonogatari lest I burst into tears), but it does provide a solid dose of everything that I love about the series - it has great characters, it knows exactly what to do with them, and its verbose conversational riddles spruiced up by SHAFT's visual style and treatment is catnip to me. That strength of character in particular is really on show and operating at full force here - the aura surrounding Ougi is wonderfully captured throughout, Oikawa makes for a great addition to the cast as her character is built up and ultimately steered into one of Monogatari's darker concepts in inimitable style, and Hanekawa continues to dominate proceedings whenever she gets screentime. Araragi is also there too of course, but who even cares about him at this point beyond a walking, talking plot device?

All of this will mean nothing to anyone who isn't a long-standing fan of the Monogatari series (in which case go to Bakemonogatari, do not pass Go, do not collect £200), but for those of us who have been there from the start these first two story arcs of Owarimonogatari are further little gems to add to our collection - they aren't the brightest stars in this franchise's sky, but they're still eye-catching in their own right as its universe continues to open up to us. Between this new series and the news that Kizumonogatari is finally coming our way ni theatrical form next year, it's a good time to be a Monogatari fan.

You can currently watch Owarimonogatari in streaming form on Crunchyroll.

8
Hugely verbose, visually eye-catching and heavily reliant on its characters - everything that good Monogatari stories should be.
COMMENT AND DISCUSS
blog comments powered by Disqus