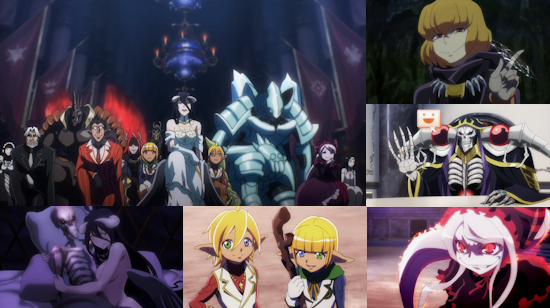 In this modern world where huge swathes of our lives are represented and carried out digitally, the thought of a virtual world that you've poured thousands of hours into being obliterated in the blink of an eye is a terrifying one, almost akin to facing the prospect of death itself. All of those people that you'll never see again; the places you can't revisit; the defining moments and experiences that are now relegated to fading memories. No wonder that the final day of an online service can, for some, be treated like a funeral - a moment to celebrate a glorious life, but also to bid a sad farewell to things that you'll never see again.

In Overlord's case, we join the story of its protagonist - known as Momonga - on the final day of a so-called DMMORPG (the D stands for dive, incidentally) called Yggdrasil which has been a prominent part of his life for many years. A fully levelled-up and powerful guild leader in the game, Momonga has made peace with the end of this virtual world - after all, his former guild mates have all moved on from the game thanks to the pressures of real life, and the contents of the world at this point is almost as skeletal as the visage of Momonga's user-created character. Such is the paucity of the game's userbase that Momonga's farewell to Yggdrasil is a lonely one for the most part, leaving him to simply toy with the user-created NPCs that adorn the home of his guild and reflect upon his achievements. The seconds tick down, midnight rolls around, and the end of Yggdrasil is nigh... or is it? The specific time for the shutdown comes and goes without Momonga being booted from the now-defunct game server, although it seems that none of the in-game menus work any more. Our protagonist has been... (wait for it)... trapped in a video game world!

Not that Momonga seems particularly nonplussed by this. Beyond his surprise that NPCs can now talk freely with him like actual humans (and admonishing himself for changing the character description of one of them in a way which eventually gives him all kinds of headaches over the course of the series), our protagonist accepts his new reality without so much as a shrug. There are no questions here of how to escape, or of what death might mean in this new world so closely tied to the virtual one he knows so well - he simply gets on with the task of being a supreme leader of his guild in largely the same way that he always has.

It's this lack of interest in the big questions which is precisely what makes Overlord so dull. Take a look through the numerous successful "trapped in a fantasy RPG world" anime of recent years, and the thread that runs through them all is how it uses the mechanics of that world - usually as it pertains to death - as a major driver of its drama and the questions it wants to ask. Sword Art Online gives importance to every action thanks to in-game death leading to real-life death; Log Horizon has its own unique spin on what death means in its world; Grimgar of Fantasy and Ash uses death as a mirror to hold up to our own society; and so the list goes on.

Instead, Overlord serves up nothing but bland self-insert wish fulfilment from beginning to end. Ainz Ooal Gown (who I ended up referring to in my head as Ainz Own Goal) - as he becomes to be known after his former guild's name - only exists for almost every other character to remark upon how powerful, how intelligent and how unceasingly incredible he is in everything he does. Those who don't talk about how perfect he is are instead simply the fodder that he uses to demonstrate his abilities, often brutally despatched for some vague "greater good" that the series really doesn't have time to explain, as it's time to talk about how wonderful our protagonist is again. Oh, and he finds himself with a harem from the first moment the world shifts from a virtual to a real one, of course. Because let me tell you, this big bulky skeleton-man is soooooo dreamy.

Admittedly, this isn't particularly new for the genre - Sword Art Online's Kirito is a prime example of a self-insert heroic protagonist himself, but at least that series allows us to follow his journey and builds up a body of evidence that he's earned the admiration foist upon him, however unlikely it might ultimately be. Not so here - our hero (if he can really be called that) is basically a fully-formed god from the first moment, and there's never any real danger of his power being usurped. He's effectively Saitama from One-Punch Man without the funny bits. You may not like it, but this is what peak performance looks like.

The real tragedy of this is that the show's singular focus on its amazing protagonist means that what could have been other interesting facets of the series get frittered away. How does Momonga feel to be left to fend for himself without his friends? What's his relationship with a world he spent so long within in a virtual form now it's made real? What's it like to hang out with NPCs crafted based upon the proclivities of his guild buddies? Some of these moments get touched on agonisingly briefly, and then pushed to one side to return to the boring, paint by numbers fantasy action-adventure show Overlord desires to be.

Maybe this wouldn't be so bad if the series managed to craft some compelling villains and eye-opening, spectacular battles - but it doesn't do that either. There's only one villain we overtly get to see strutting their stuff, and she's just your run-of-the-mill crazy antagonist, and given that the final ten minutes of the series are just a massive, constant sequel hook that spits out plot points left and right you're ultimately left with the feeling that this series was just a warm-up act.

The show doesn't acquit itself particularly well visually either - there's far too much subpar CG that ruins any immersiveness it might boast, and although there are some striking character designs the overall feeling of Overlord's world is one that you've seen a hundred times before. If you're going to give me a boring, predictable protagonist doing dull things, at least give me something eye-catching to look at.

Both English and Japanese voice casts acquit themselves well - in particular, both language tracks do good work with Momonga's voice as he switches from a slightly weedy inner monologue that represents his "real voice" compared to the more booming voice he uses to exert influence as the world's supreme leader that he is. Subtitles are also good throughout, although for some reason the ending credits censor the word "fucking" in the credit subtitles; odd for a show that has no qualms throwing around other swear words within the series itself. We haven't seen the physical Collector's Edition release of the show at the time of writing, so can't comment on the qualities of that aspect of the release here.

I came into Overlord quite excited to see what it had to offer - as over-used though it is, the genre it represents does have plenty to offer and ideas it can dig into, and having heard such positive noises about it I was looking forward to digging into what it could bring to table. Sadly, having watched it all, I'm sat at the table with a rusty spoon and a plate of self-raising flour in front of me, and I really couldn't be much more disappointment. There are so many far, far better examples of the "trapped in a fantasy RPG world" genre out there and readily available in the UK that it's difficult to find any reasons to recommend Overlord over and of them. If all you want is some paint by numbers self-insert wish fulfilment then I suppose the series is functional, but whether you want to engage your brain or simple enjoy some spectacle then other series that I've name-checked in the body of this article will serve you far better.

4
This by the numbers series is as lifeless as its undead protagonist, and does nothing to stand out in a crowded genre of notable contenders for your time.
COMMENT AND DISCUSS
blog comments powered by Disqus