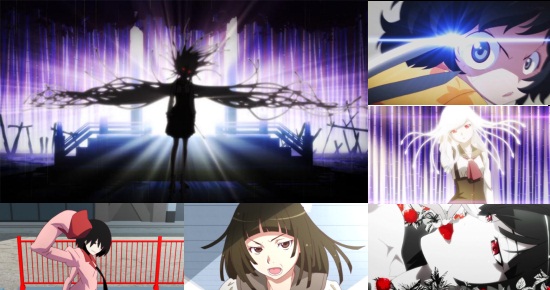 MVM Entertainment is really on fire at the moment, and is pushing out the third new Monogatari release in as many months, this one coming in perfect time to give us something to spend that shiny Christmas money on! The Monogatari series as a whole has been a little inconsistent of late though, so let’s see where Otorimonogatari is going to lie on the scales (pun intended).

After a long break, Nadeko Sengoku is back - high time too, given that we haven’t seen sight nor sound from her since a brief scene in Nisemonogatari. Something’s different about her as we enter her latest arc though. Could be a new hat? New shoes perhaps? Or it could be that she now has snakes for hair and has just ripped Araragi and Shinobu to bits? Yeah, that’s probably it.

Confused? Well don’t worry as we’re going to take a time skip back to find out what’s going on here, as Nadeko encounters a snake spirit seeking payback for the snakes she killed during her first arc back in Bakemonogatari. This creature makes a deal with her – find his original body and she’ll be, if not forgiven, then at least released. Deciding that she needs to tough this one out alone, Nadeko declines to take advantage of Araragi to help her out again and soon finds her troubled love and school lives turned upside-down as we head towards the bloody climax.

Otorimonogatari is quite an awkward arc to watch and review as in theory it’s a very clever concept that you want to like a lot, but in practise the narrative is so mishandled that it doesn’t so much tip its hand as place all its cards face up on the table within the first five minutes. That opening sequence really spoils the show completely, as on one hand the audience now knows exactly what’s going to happen to Nadeko - leaving little suspense or surprise on that front - and on the other the audience doesn’t really get any suspense because we all know that Araragi and Shinobu are essentially immortal anyway, and there’s no way they’re going to kill them off when there’s still episodes still in production let alone awaiting release. If that one scene had been stripped then you could easily add another point or two to the score you’ll see below, but the normally strong writing and direction of the franchise seems to have taken a holiday and forgotten to check what the interns were doing. There’s also a bit of an odd ending which leaves things much more open that Monogatari tends to, and it’s unclear whether this will be explained later on at this point. Hopefully things will be cleared, up as one thing that’s really good about Monogatari is its nice, clean and satisfying endings when compared to many anime.

Without that sequence the story is, as I’ve said, very clever, as its essentially the same story as Nekomonogatari White (I won’t say any more or it’ll give the game away) but one that uses a different character to take things to a different place and climax. Whilst it’s not as strong on a character-centric level it still has some great moments, such as the aforementioned beat-down of Araragi and a great moment where Nadeko faces off against one of her teachers and goes, as we Terry Pratchett fans would say, completely Librarian-poo. One thing that does come up at this point (though not directly tied to it) is that despite Araragi and Senjoghara being officially a couple, they haven’t shared a scene together since Nisemonogatari! It’s not particularly anything to do with our review but I just wanted to point it out as once I realised it I couldn’t stop thinking about it....

As always the series looks brilliant, and in Otorimonogatari there’s a whole host of great visual feasts for you, from some brilliant new locations to (naturally) a lot of snake-related imagery, all of which is fantastic. Sound-wise things are a little more low-key this time with the new opening and ending themes proving pretty unmemorable, and although Kana Hanazawa does a good job she doesn’t quite bring her A-game (check her out as leading lady Akane in Psycho-Pass or even back in Bakemonogatari to see her really knock things out of the park!).

If nothing else then, Ortorimonogatari leaves things in a pretty interesting place should they choose to do a follow-up. If you were to put in the disc and immediately skip the first chapter then you could have a great time with this, but on its own merits it really does trip at the first hurdle and can’t quite manage to bring enough to the table to make up for its pretty glaring flaw.

Japanese audio with English subtitles. Extras consist of clean opening and closing credits, trailers, and a recap episode of the final stories of Bakemonogatari and Nisemonogatari.

6
Nadeko returns, but it's narrative structure rather than Perseus who kills this Medusa.
COMMENT AND DISCUSS
blog comments powered by Disqus