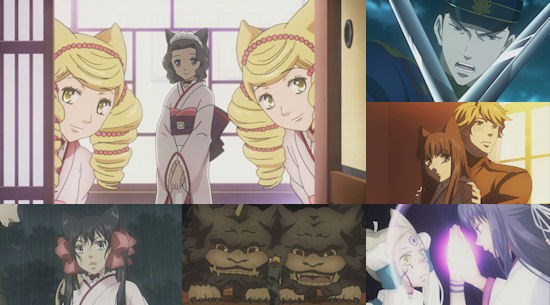 In the midst of the various streaming offerings which hit the UK in the autumn thanks to Crunchyroll, J.C. Staff's Otome Yokai Zakuro (aka Demon Girl Zakuro) arguably sat pretty, quite literally, over the rest of its brethren as the season's most beautiful new series.  If nothing else, its stunning character designs, intriguing setting and occasionally strikingly beautiful animation was a joy to behold, and luckily the content of its opening episodes was pretty entertaining into the bargain to make for a series well worth checking out.

If its very early episodes threatened to set up Otome Yokai Zakuro as something of a monster of the week affair, with our quartet of half-spirits teaming up with a trio of military officers as part of the Ministry of Spirit Affairs to put to rest any problematic spirits, as we progress through the series a more central and cogent major storyline soon emerges surrounding the show's titular character.  More specifically, questions about Zakuro's past and her mother begin to pile up, pushing their way to the forefront of proceedings despite the best attempts of her guardian Kushimatsu to bury them.

This central focus gives the series the energy it needs to keep pushing onwards, blending its slices of action with character development and also keeping the relationships between our various half-spirit girls and their military assistants well and truly in the spotlight.  Although most of these relationships are cemented almost from the very start, later episodes of the series shake things up a bit by forcing some different partnerships to work together, while the rocky duo that is Zakuro and Agemaki carries to blow hot and cold from beginning to end to deliver both emotion and/or comedy as required.

All of this builds into a more tangled and conspiratorial web around Zakuro and her importance as we reach a climax which introduces the Village of Oracles, and an ending (modestly titled "Brilliant Finale" as its final episode) which is sadly a little more predictable than we might have liked, producing some rather typical anime fare where good prevails and even the bad guys turn out to be more embittered and misguided than actually outright evil.  Even the potential of an emotional ending is tempered rather by the need to open things up sufficiently to allow for a second season if the gods of anime commissioning choose to give one the green light.

While that ending is rather weak sauce in critical terms, it can't be denied that Otome Yokai Zakuro is an exceedingly polished series over all - it effectively succeeds in everything that it sets out to, and its visuals are sufficiently easy on the eye to make even some slower scenes and episodes breeze by effortlessly.  Given its setting and character roster a lot more could arguably have been done with the series, but everything that it does attempt is delivered proficiently and with enough entertainment value to make for a pleasant and broadly entertaining viewing experience.  In all honesty, that's probably all we could hope to ask of Otome Yokai Zakuro, so in those terms it succeeds with a dose of visual panache that allows it to hold its head somewhat above the murky waters of mediocrity.